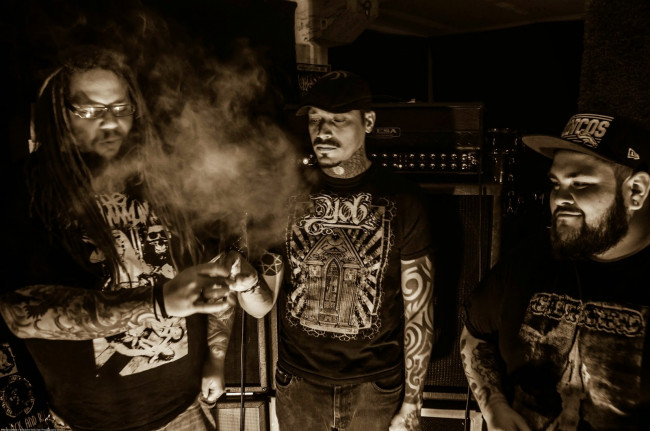 I discovered this one via Neil Kulkarni’s regular dose of savagery over at F.U.N.K. Here’s what he says:

‘Scorn’ from 2012 revealed just what a unique slab of monstrous molten heaviosity this Portland 3-piece can cook up – the split 7/10/12″s that have come since with Xaphan, Hexis, Fister and Hessian have only deepened the awe and intrigue and this new EP is yet more addictively aggravated mayhem. Truly a mirror to our times and absolutely essential.

It’s not one of his more scathing reviews. (He likes the fucker, can’t you tell?) That’s saved for, wait why don’t we let him tell you? He doesn’t let the fact the band in question don’t have a new single out deter him from writing this – why should he? And nor do I let the fact I haven’t asked his permission to reprint it deter me from running it – should I?

Chris sat alone, trying to work out the song, fidgeting. He felt sick and bloated from the McDonalds he’d just eaten in a fit of macho pique, couldn’t deny that her Pappardelle Duck Ragu that she did every Tuesday night was much missed. The song, Chris thought, and whispered, THE SONG. Concentrate. Images came to mind, the same images of vaguery and faint urgency that the band had put out before. It comforted him. Stars. Rhymes with ‘heart’. That’s good, thought Chris, that’s good. What then? Dry. What the hell he thought – yeah, that bit after can be an instrumental. I can do my shit dancing on that bit if we need to do it live. Was he losing his motivation? Undoubtedly he was lonelier than he’d ever been before. Still, a verse and a bridge, that’s not bad work for an evening he consoled himself. The band can fill in the rest with their usual gubbins, thought Chris. Some twinkly Radiohead/U2isms, they always work – desperate to turn his procrastination into worthwhile conceptualising he flailed around for impetus – I’ll get a friend to make it dancey, a remix might make a few more ackers, maybe get Diplo involved? His thoughts, unformed as they were, were suddenly interrupted by a ring on the doorbell. Who could be calling at this time? Punching the intercom button with trepidation Chris pondered – who the hell? Lawyers? Management? HER?

It was David. “Hi Chris, it’s you-know-who”. Sighing, Chris hit the entry buzzer. He’d been expecting this. David had rung as soon as it had all fallen apart, had offered help (“I’m here for you Chris, just like Coldplaywere there for us”), but Chris had been in too dazed and despairing a state to process it. Now, with his fresh flush of inspiration, but with a growing sense of isolation and purposelessness, he needed some company, some warmth. A minute later, David stood frozen at the apartment door momentarily as Chris sized up his paunchy yet appealingly pink frame, clad in loosely-tailored chinos and old denim shirt. Heart starting to race, Chris let him in: ‘Hi David, what’s up?” he asked nervously. “One guess” growled D, eyebrows rising, then gaze dropping down to his own rapidly tenting groin. “I want to talk to you about the Commonwealth Games opening ceremony…”. “But Prime Minister” stammered Chris, “this is all so sudden”. He knew he was lying. By the wicked leer on D’s face, Chris could see HE knew he was lying. “Shut up Chris” barked Cameron, “what was that song you wrote, The Hardest Part?”… Chris nodded, jaw dropping… “well I’ve got a real Rush Of Blood To My Head, can you help me out?” snarled the Prime Minister. Behind them the door slowly swung shut on a world that didn’t matter tonight. A world that could never know…

No reason to have it here at all, really. Just that it inspired my review of the song in question.

This track is harder and heavier than David Cameron’s ballsac after a Coldplay concert.

OK. Move along now. Nothing more to read. Thanks Neil.