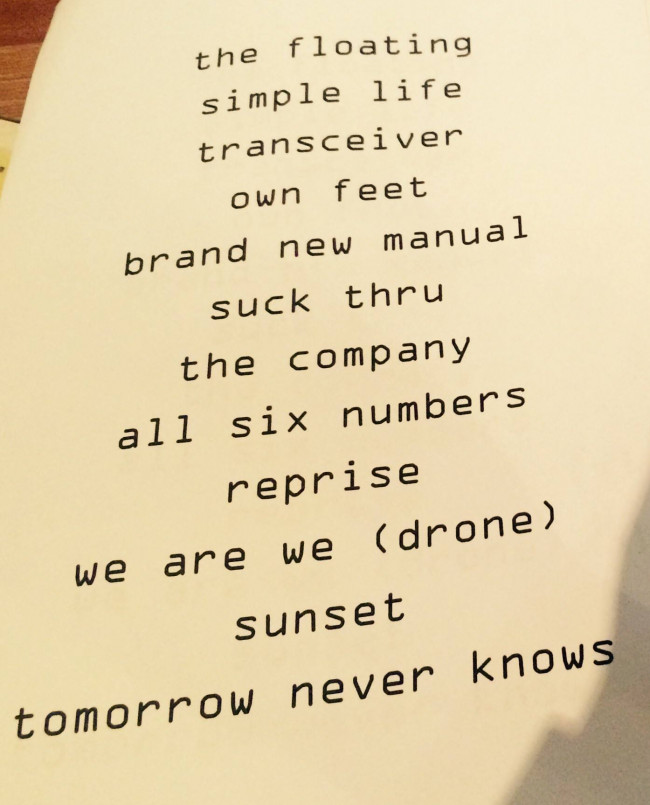 It’s a thin line. I’m not sure I want to quantify it; I have a feeling it keeps moving. Association. That’s what I’d like to talk about here. No, not association. The way the line keeps moving. I’m not the person I was in 1993. I am the person I was. I’m not the person I am now. Sometimes, I like to imagine what the world would be like if I liked R.E.M. more. Shut my mouth. Follow the money. I like the J. Mascis guitar sound. I like the My Bloody Valentine guitar sound. I like it when they intersect. More often than not, I don’t. I liked it on Bandwagonesque. Shut up. Follow the money

To myself, I wonder why I always have to lapse into dialogue like this whenever I hear music like this: the poppier, Thurston side of Sonic Youth. There I go again. Caught in a trap, no turning back. There I go again. Is it because I am way, way too familiar with the Noise and so when I hear the Noise I cannot get past that familiarity, however much I might be enjoying the Moment?  There is plenty to distrust about the Dead Electric album that someone linked me through to…but why would you mistrust music? I mean, really? Why – you think folk are out to deliberately copy whatever they can, can’t blossom with their own instinct? Intention counts for little. Interpretation is near all. Is it? Is this why I keep having these dialogues? It’s nice to hear MbV blended in with Sonic Youth, but it ain’t like even the 100th time I’ve heard it attempted. Am I scared I won’t consider myself cool? I like this music.

Everyone else, they follow the path to the stars. When they reach the stars, they stop. They grasp on to whatever they can. They marry up, settle down.

To myself, I wonder – why the bitterness? I’m married up, settled down. I didn’t grasp on to the stars like I could have, didn’t shut up when I should have – but. Wasn’t that why folk liked me in the first place? And if not, then why is that my fault? I mean, really? I like this music: it ticks the right distortion boxes, it causes me to have favourable associations, it lodges itself in my head second-remove. Easy listening for the troubled soul. But isn’t everything easy listening once you’re used to the genre, the form, the association? I’ve always found kids’ music way more unsettling than the most extreme noise terror or out-there jazz improv or Clash B-side. I don’t find music unsettling. Not really. Unsettling is the way some of my students look at me, like they’re weighing up with they should fuck me or fuck me up or whether I’m just one more blank nobody there to be tolerated best as they can. Not music. Seriously.

This is a fucking excellent record as Jez below informed me randomly on Twitter a few days ago. You think anyone’s going to take notice of my opinion these days. It’s as good as… fill in your own favourites, your own delusions, your own blatant crushes. I mean, seriously. If the world could hear its beauty for half a nanosecond the world would be transformed. I normally use the description “red” when encountering guitars like these. Dead Electric.

The music hops around. Like they can’t decide which record to steal from. Is there a manual you can buy? I like this music. I said I LIKE THIS MUSIC. I refuse to be cowed by a ghost of my former self into disliking it. Fuck off, snob. (But isn’t snobbery all we have?)

Am I right? I mean, whatever. They really should lose the shoegazing tag.