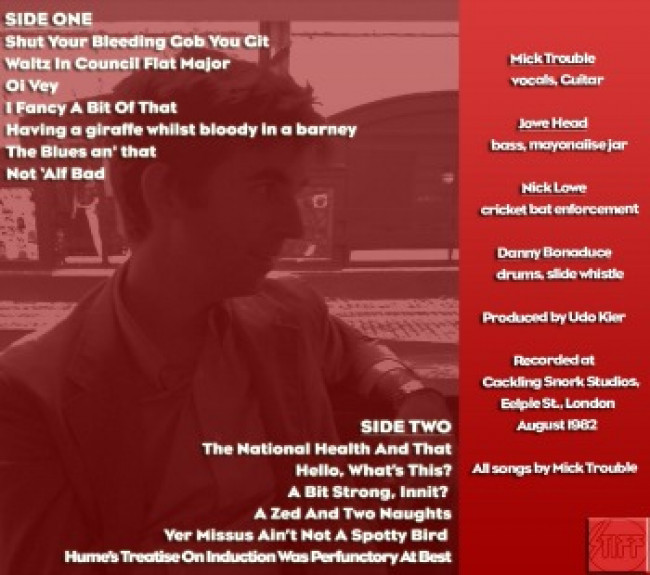 There was The Times – and they were pretty snazzy, what with all their Mod leanings and laconic London observation.

There was Wreckless Eric – and man, who could resist one of Eric’s pitiful laments at closing time?

There were the TV Personalities – and they were a little bit complicated. Maudlin and desperate at turns, twee and desperately fetching at others, full of vigour and despair and premature nostalgia. If anything, they were the great lost troubadors of the Eighties: as moving and affecting as Dexys, their initial records were so full of sarcastic glee and a glib way around a three-chord melody, it made their later work even more wrongfully sad.

There were other bands too – “Gee mother, that looks like a Swell Map”, The O-Levels, Patrik Fitzgerald’s bedsit laments, the Mekons’ one-chord wonder – in many ways piss-takers all, but in many other ways more soulful and human than the people they were taking the piss out of. Isn’t it always that way? Doesn’t the laughter always hide the tears?

Depending on your level of interest, you’ll have encountered most – if not all – of these names before. Go back and listen to them now. Give yourself a treat. Transport yourself back into a world of three-bob chippies, and National Front-run public houses, a world where you could get spat on for wearing your school tie with an Essential Logic T-shirt – even in London. Sure, all that music’s wonderful, I’d be the first to admit. (I read somewhere Dan Treacy of the TVPs having a pop at me for ripping off his band’s sound in ’83. Like any of us were accomplished enough to be able to copy someone else’s music.)

But until part time punk/Collapse Board contributor Jed Smith tipped me the wink on Mick Trouble, I’d never heard of the geezer. And he might be the greatest of them all, if this early track Jed unearthed is anything to go by…

Equal parts Wreckless Eric, Ed Ball and a dash of the Treacys, with a healthy dose of sub-Jam power chords, ‘Shut Your Bleedin’ Gob (You Git)’ (to give the song its proper full title) is a naive wide-eyed look back to the days when a man would soon as glass you as look at you in the boozer; its forlorn battle-cry, “Shut your bleeding gob/you stupid git” resonating across a thousand empty milk crates and discarded copies of Absolute Beginners.

Its message couldn’t be starker.

“I think you’ve got a problem mate/Think everyone is second-rate/The only one with a problem/Is you.”

There is an intimate beauty in its clarity.

There’s a lost album somewhere – the deprecatingly titled Not ‘Alf Bad, That featuring the classic ‘A Bit Strong, Innit?’, an early demo of which was sent to Alan McGee in 1982 for a possible gig at his Living Room mid-London venue. McGee reportedly turned it down, stating he felt it “too punk-y”. Chastened, Trouble turned to his boozing mates down The Dog And Turnip, Nick Lowe and one Declan MacManus (no relation). The rest is history – or, as Jed mournfully pointed out, it isn’t. Rumour has it that former Swell Map/TV Personalities and Legend! producer, Jowe Head played bass on the album, while Nick Lowe is supposed to have produced it in a quick hour between visits to the dog track. I don’t know how true that is – it’s possible, sure – but what I do know is that this one song I’ve heard is some of the greatest awkward pop from the 80s I have heard in decades.

And trust me, I’m something of an expert in these matters.

As one journalist wrote in The Sadist’s Guide To Marginal U.K. Pub Rock, 2010 Edition

“If Daniel Treacy is ’80s Blighty’s Bob Dylan (he ain’t, cause he never made any money) then Mick Trouble is his Phil Ochs. Except that Mick Trouble did make a little scratch after all, didn’t he? Just a little, mind.”

The album was rumoured to have sold reasonably well, so much so that Trouble was able to “retire at the age 26”, only to return once more with a follow-up album, “1986′s Whitney Houston”.

“Unfortunately,” the journo wrote, “Whitney Houston’s debut album, Whitney Houston, was released during the same week, and Trouble’s effort was completely overshadowed and fell of the charts rapidly. Trouble relocated to Los Angeles the following year and these days runs a non-profit cheque cashing franchise.” (Magoo, 2010)

One Response to The return of Everett True | 121. Mick Trouble