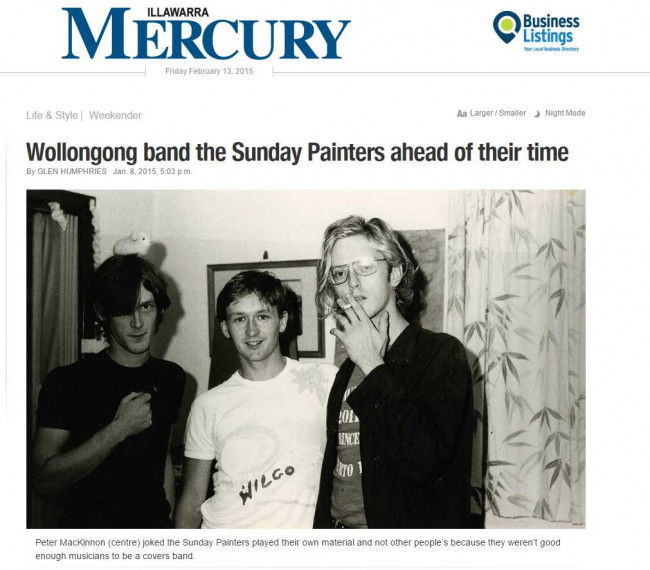 Most the time, I have no idea what’s going on here.

I was scrolling through recent acquisitions on my iTunes, playing and discarding songs within a matter of seconds. I often don’t recognise names, that’s not how it works. I was drawn to an album by a band called Sunday Painters: it had one track over 10 minutes long, and one around a minute. Usually, a reasonable indication something’s going on. Had a listen in to the short track – ‘Venus (Bathed In Misogyny)’. Whoa. Now that’s weird. Reminds me a little of Fat White Family but way more lo-fi and basic and dissonant. And is that an Aussie accent? Words tumbling over themselves in their desire not to waste recording tape. Then some nice limp-wristed guitar and 12 Cubic Feet bass on ‘Heart Of A Siren’… should have tipped me off. Should have. Didn’t. Is that a female Aussie accent? Album’s called In My Dreams – Singles. Figure maybe they might be contemporaries of Street Eaters, got that retro seven-inch feel. Observing, articulate lyrics, some politics. Cassette culture.

So I played this track. Had to be the Bowie song. No fucken’ way anyone else is ever gonna use that title. So I played it. Always judge a band by their covers. Is it going to be bogstandard ordinary or is it…?

Wow! Sped up and nasty, tinny. Words spat out like Mark P. Insanely wrong. Makes me want to go out and set a few hedges on fire (like I used to).

Wow. Turns out I could’a lost my heart to ‘Heart Of A Siren’.

There’s a track called ‘Please Kill Me’. (You get this? A track called ‘Please Kill Me’). And the title track is, of course, the monstrous slow-burner, missed-heartbeat throb of the post-10 minute epic. Like a Velvet Underground for people who can’t really play or tune their instruments and know it doesn’t matter the fuck anyway. More intense – or as intense – as Joy Division, but.

Which deranged bastard sent me this? IT IS SO WONDERFUL. I wanna say Door And The Window cos that’s one of my default settings when confronted with music like this, but fuck it. Swell Maps.

Who? Where? What’s YOUR FUCKING RUPTURE?

What’s Your Rupture is pleased to present another farflung chapter in the history of DIY music. Sunday Painters hailed from Wollongong, Australia, and TBD collects their first three 7″ EPs, all self-released by the band in miniscule, hand-assembled editions from 1978-1981. The music that transpired from their membership (helmed at the core by Peter MacKinnon and the late Peter Raengel) bridged glam, art-rock, noise and punk into pop passages that stung and longer reminiscences of near-ambient qualities. Their music, at this stage, is like the unholy but not unreasonable combination of the Homosexuals and Crass. Now we place it before you for further contextualization. Nine songs altogether, including a fine cover of David Bowie’s ‘Rebel Rebel’.

Demented DIY from Wollongong from 1978. Fucking good on ya, mates.

This could so easily be on Virtual Cool from Brisbane, 2015.