The return of Everett True | 1. The Aquadolls 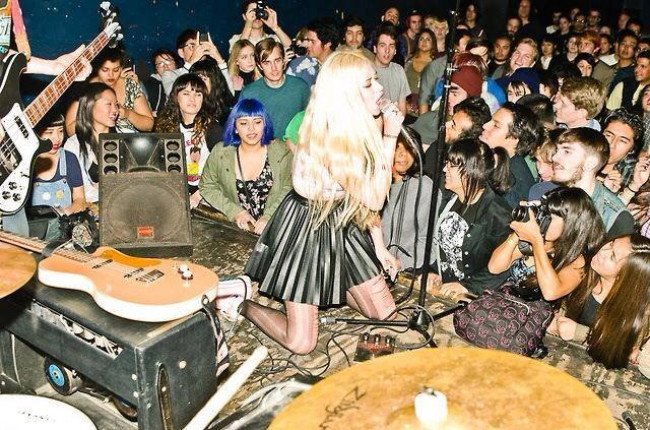 Man, you go away for a couple of seconds and find someone else’s moved into your pad and changed the locks.

Ah well. This is magnificent, just off-key enough to rouse me from my self-imposed exile. It’s cute, and it knows it – but… listen up. I discovered The Aquadolls via Twitter. This is how it works. I FIND STUFF FOR MYSELF, THANK YOU REDUNDANT RETARDS. They favourited a recent Vine post of mine – the one that rhapsodises over Australian band GOD yet again – and their name appealed to me (I like both Aqua and Demolition Doll Rods), so I investigate a little and notice they give massive props to Vivian Girls (amid sadness to hear the ladies have broken up). And then I notice the singer gets criticised on YouTube for ‘hogging the limelight’. Whoa. Bangs forbid singers should do that! So sure I was prejudiced before I listened, but you show me someone who listens without prejudice and I’ll show you a mewling dullard who thinks that an 8.3 actually means something. It’s about stained T-shirts and the splash of surf on sleepy dust-encrusted eyes. It’s knowing that passion can be full-tilt and consuming. It’s about Shadow Morton and Ellis Greenwich and 2014. It’s a love for the same love for that a ton of other folk show a love for but damn alive there’s a reason for that love for and you think I can resist such reverb-saturated female gorgeousness then damn have you got the wrong fucking writer, girl. They have other songs, sure – but this is the one I’ve been listening to over and over and fucking over again (15 times easy) until the whole world is blocked out and my existence is an open top Oldsmobile driving down the freeway towards Disneyland even though we don’t even know if we’re in the right State, state whatever. It speeds up, it slows down, it makes damn sure you’re fucking listening, it pisses all over your notions of cool – while of course thoroughly retaining its own notions of cool – and it is so fucking wonderful it makes me wonder how I could even have countenanced giving up writing up new music, even for a split second.

There’s a bit where she doesn’t sing but I don’t mind because the guitar sounds so delirious.

It finishes and you HAVE to play it again immediately, there is such a cavernous gap in your life.

I would love to hear 100 versions of this playing simultaneously. I would love to walk out into the whale corridor next to the State Library here on Brisbane’s South Bank and hear this blasting from the speakers. I would just overload from happiness.

The Legend! is in love again. SHOUT IT! SHOUT IT!

4 Responses to The return of Everett True | 1. The Aquadolls