The people have spoken | The greatest band of the grunge era 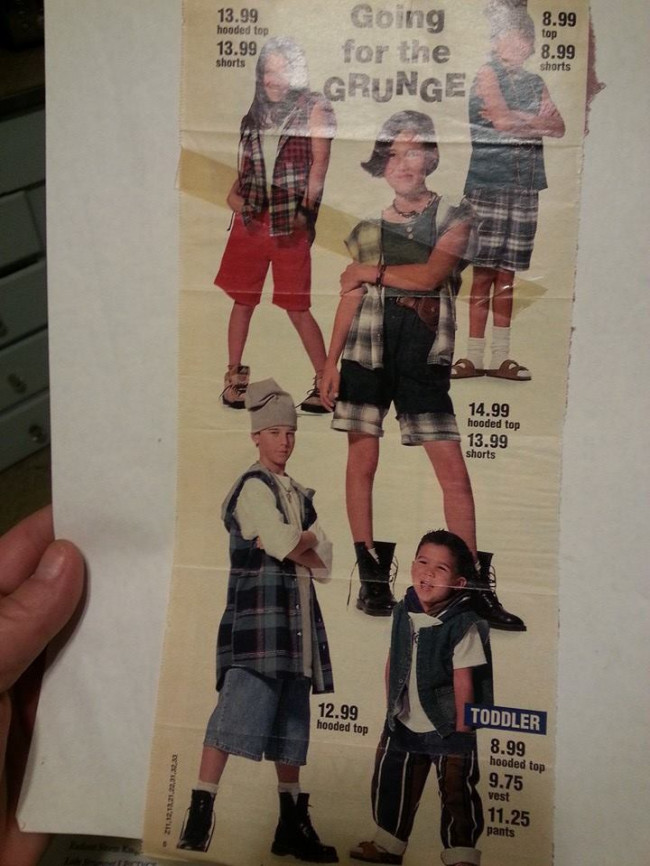 Grunge began in 1990 when my previous girlfriend broke my heart by leaving me for some bloke she met on a railway station in Germany. Grunge finished in 1996 when I met the woman who would become my future wife. (In between I went out with a woman who – by being my grunge girlfriend – defined the entire movement.) The following chart is based on an entirely scientific method of collating random votes from random Facebook ‘friends’, randomly weighted.

Incidentally, I’m a) dismayed at the lack of female representation in this chart, and b) totally dismayed that no one bothered reading this blog entry first (about “the greatest band of the grunge era”).

All quotes taken from Nirvana: The True Story.

Looking to discover who invented the word [grunge]? Rock critic Lester Bangs described The Groundhogs as ‘good run-of-the-racks heavy grunge’ in the April 1972 issue of Rolling Stone. Mudhoney guitarist Steve Turner says he’s seen it used much earlier than that, on the back of an album released by rockabilly pioneer Johnny Burnett, and also in connection with Link Wray. Even as early as Dry As A Bone, Sub Pop were promoting their label’s sound as, “Gritty vocals, roaring Marshall amps, ultra-loose GRUNGE that destroyed the morals of a generation”.

‘Teen Spirit’ debuted at Number 27 on Billboard’s Modern Rock chart on September 21: radio stations – who had initially refused to play it because they couldn’t make out the words – were deluged with kids wanting to hear it. “My wife bought Nevermind and I was like, ‘Holy fuck’,” exclaims Tom Hazelmyer. “Nirvana had taken all the balls and gristle of what the Cows and Melvins and The Jesus Lizard were doing and made it into what Tad called it – Beatles pop songs.”

“Living in Olympia when I was 20 years old, I lived in a town where every band either had no bass player or else it was keyboards and a singer, or someone singing along to a recorded tape or with just a guitar player. All we heard from the rest of the world was, ‘You’re not legitimate, that’s not real rock’n’roll’, particularly from the big city next door, Seattle. They would laugh at us like, ‘You can’t play your instruments, you don’t know what you’re doing, that’s not rock’n’roll’. In the days of hardcore, it’d become so that if you weren’t Black Flag, or some derivative of Black Flag, people would laugh at you for claiming to be punk rock. Today, kids live in a world where duos in particular are the thing like The White Stripes and Lightning Bolt – both big and small, duos or laptop artists like RJD2 are the norm in the post-Pitchfork world. We led the fight that made this possible. I laughed at the old people when I was 20 who said they’d paved the way for us and I can’t really expect the 20-year-olds now to understand that Godheadsilo made it possible for most of these bands today, or Beat Happening or Mecca Normal. They suffered all the degradation, the hard work that never paid off, the years of ridicule, so that other bands could…”

The next morning, lying awake in their hotel bed, Kurt and Courtney decided they should get married. As was her wont, Courtney soon called me – and several other thousand friends – to impart the happy news. I wasn’t totally enthused, mainly because I had a stinking hangover. I wasn’t the only one worried, either: “Kim Gordon and Julie Cafritz told me when me and Kurt got serious,” Courtney told Rolling Stone’s David Fricke. “They spelled it out. ‘You know what’s going to happen? You’ll become junkies. You’ll get married. You’ll OD. You’ll be 35. You’ll try to make a comeback.’ I don’t give a fuck. I love this guy.”

I love Melvins because they are loud, basic and primal. That’s it. They’ve had their one idea and they’re not budging from it. They want to rock, and they do just that, with no consideration for taste or sales or carving out a place in history. It’s the real grunge. Together, the Melvins have a knack of slowing time down so each note seems to last an eternity. This is indubitably a good thing, if only because life is too short.

Here’s what I hate about ’77 punk, and The Sex Pistols in particular: commentators stuck in time, stunting the development of those they’re supposed to be informing by their constant referral back to that one moment when everything was still vivid for them. Critics speak of how The Sex Pistols were a one-off, something special beyond everything that came after. “It was incredible the impact they had, considering how short a time they were around,” reads the standard line. No. What’s incredible is how much space has been devoted to one moment that was great, sure, but which would never have taken on such shades of importance if the media weren’t composed of such dullards. Likewise, Nirvana and the ‘last great revolution of rock’.

In Mezzago, Italy, Kurt joined Tad to sing Tad’s songs ‘High On The Hog’ and ‘Loser’.
“Tad had passed out from the heat, so Kurt jumped up on stage,” recalls Craig [Montgomery]. “At the end, some kid reached over the barricade for Krist’s shoes. And I knew that Krist couldn’t be shoeless in Europe. That would be bad. So I jumped over the barricade, and I must have scared the crap out of this kid, because he just gave them up to me.
“Maybe I had my cycling cap on,” he laughs.

At the same convention, Kurt and Courtney took a cab across town to Wetlands at the unfashionable end of Hudson Street, to see TV Personalities play live. It was the usual mixture of desultory humour and bittersweet pop. Arriving at the venue, Kurtney espied Steve Malkmus, singer of Pavement. Not brooking any arguments, they placed themselves either side of Malkmus at the back of the club, remaining deep in conversation all night.

The grunge explosion was nothing like the way MTV later chose to portray it.
It wasn’t just testosterone-driven, bare-chested rock gods, whining about how hard their life was because they had to walk 100 yards to the tour van , nor was it the easy-going alterno-Friends lifestyle as so revoltingly portrayed in films like Singles and Sleepless In Seattle. Nor was it Courtney ‘Axl Rose’ Love and her loser husband. No. It was loud music, and rain. It was vomit and laughter and not knowing where you’d wake up the next morning. It was countless hours of tedium, waiting for another crappy band to soundcheck down the OK Hotel and The Vogue. It was shared mattresses and Greyhound coach journeys, wired partners who’d soon as smash you over the head with a beer mug as fuck you. It was house parties and Mexican beer, sweet coffee and lumberjack shirts. And it was a healthy dose of cynicism to carry you through it all.

“You know the first time you hear out-there jazz?” asks Slim Moon. “Your brain goes, ‘That’s not music.’ It was the same the first time I heard Beat Happening. As minimal as they were, I was like, ‘These people must be 12, they have no fucking clue what they’re doing, and they probably just wrote these songs today’. I was really offended. But the first independent record I bought was ‘Our Secret’ [BH seven-inch]. I walked into Fallout Records [Olympia] and I was like, ‘Tell me what to buy’. Bruce Pavitt [future Sub Pop boss], who was working there at the time, told me to buy that single. I really liked the Calvin song. I listened to that song all the time. It sounded like music. Somehow it didn’t connect that this band was that same horrible band. The next time I saw Beat Happening I realised there was no bass player. Then I started to get that vocabulary of how to understand it.”