The people have spoken | 10 great discoveries from Collapse Board 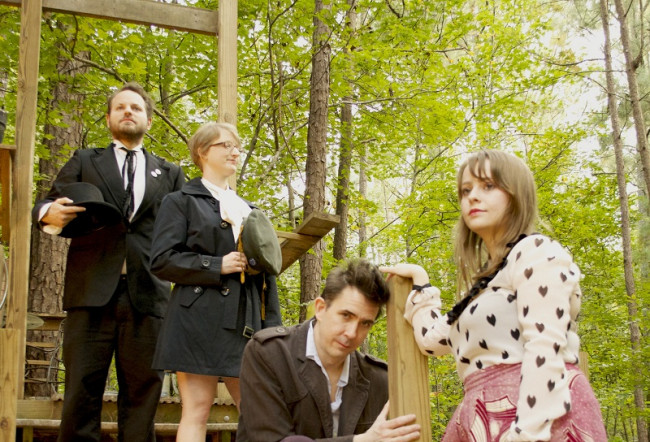 I ain’t sayin’ we’re always first. In fact, I know damn well that quite often I’m around three years late. I’m just sayin’ that it’s nice to know that some people have been turned on to some great music via this site. Cheers.

2. The Tenzenmen label and the Chinese underground scene

Beijing is to the world in 2012 what Brooklyn was in 2010 or Manchester was in 1989: where it’s fooking at, man. Only, people have better haircuts (and, in Brooklyn’s case, fewer beards). This isn’t entirely out of the blue – we’ve mentioned Guai Li and 8 Eye Spy and Ourself Beside Me before, and if you haven’t taken time to click on those links, we’ll come over to your house and beat up your cat.
(Princess Stomper)

Sometimes it’s good to trash the slick-sounding records and pop in something raw and relentless and real, and this fits those three categories quite nicely. Just when you think they’re gonna get totally trashy, they pop off a pretty pop gem. It goes back and forth like this for 34 minutes. Too much, or not enough? Depends on my mood, but I LOVE it when they ditch all that and go for more melodic moments.
(Joseph Kyle)

4. The Bastards Of Fate

Every time I listen to this album, I hear something new. It’s kind of freaking me out. I’m not used to this. At this point in the 21st Century, and at this point in my musical life, nearly every album I hear sounds familiar, recognizable — whether I like the music or not. The Bastards Of Fate have managed the rarest of feats. They have recorded an album that doesn’t sound like anyone else in the world.
(Scott Creney)

Hookworms is the bruise on your thigh from a drunken early morning collision with the kitchen table.

Hookworms is the number one place for an unjust, unbalanced response to the day’s events.

Hookworms didn’t need to buy the new My Bloody Valentine album. Or download it directly. What the fuck were you thinking?

Hookworms is extraordinary, a revelation within the dull, pedantic world of rock-based music.
(Scott Creney)

It starts as an exercise in minimal repetition. A raw female voice shouts about television screens and radiation over solitary, metronomic kicks on a bass drum. Subdued guitar builds up ominously in the background as the voice grows louder, more impassioned, more wild, culminating in around 30 seconds of careening noise before crashing to a halt. Second song kicks in. Katie sneers into the microphone, conjuring the spirit of Lydia Lunch as she spits out a rant listing signifiers of their DC roots – Air Force One, the FBI and the CIA – while Daniele and Gideon intensify the feeling of paranoia, all bashing drums and distorted guitar that repeatedly fall apart and weave back together.
(Erika Elizabeth)

The Long O doesn’t demand your respect. But it does ask for patience. Give it time. Escott can wait. He’s already proven that. Those who do will find a love that outlasts the ever-churning hype behind the trend-coasting buzz bands.
(Lee Adcock)

Sometimes, people ask me if I get starstruck – bearing in mind the stellar quality of people I meet. Yes. Yes, I do.

Someone has already described this Brisbane trio as being… damn it. I really don’t want to bring in parallels. I’m back in the pool room in an Islington pub, hiding from the members of Galaxie 500 because I don’t want to tarnish the varnish. I’m trembling like a leaf backstage at the ICA, about to introduce Daniel Johnston on stage. I’m Wayne and whatever the hell that other guy was called, on my knees in front of J Mascis in 1987, “We are not worthy”. Bands like this make me feel my age, leave me floundering and scarred. So good, so natural. The next band I’m going to form is going to be called The Sarah Byrne Appreciation Society, named for the drummer in Screaming Match. (She’s already featured in this series on a number of occasions – here. And here. And here.) But man, that other singer! I would swoon except I’m worried I’d never get up again.

And of course the guitarist rocks.
(Everett True)

Eventually someone was bound to out-scorch Melt Banana, bound to shave Harry Pussy into irrelevance, and bound to just come along and fucking liquefy your face. Thirty-two songs in five minutes, each one signaled by the clicking of sticks. Beyond meaning. Beyond sound. Beyond music. Beyond sense. Boredoms is The Beach Boys. Beefheart is a tv preacher. Sonic Youth is so fucking what. This is screaming John Coltrane on fire seconds from cancerous death.
(Scott Creney)