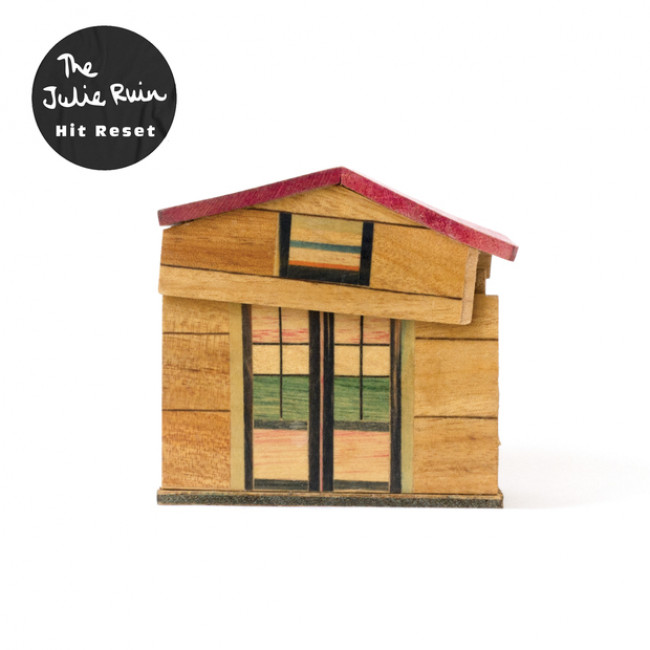 Sometimes I don’t feel like being challenged by music. I want to escape into the wistful longing of Frankie Cosmos, or swim in the gentle heartbreak of Waxahatchee. I close my eyes and wallow in the miserable beauty that infuses in me like a mellowing tea. Each song is a sliver of perfection, but I don’t have to think about uncomfortable truths. Sometimes I only want to play Sleater-Kinney’s catchiest songs and forget about their dangerous side. I can dance along and forget what makes them angry. It’s because I don’t want to face the things I’m unhappy about. You don’t always want the lessons of punk rock when life’s giving you a hard time. So it usually takes me a while to listen to Kathleen Hanna’s latest offering – I know it’s going to be confronting, no matter how catchy it sounds.

And this isn’t because Hanna is a bitter or angry person, but because she has lived her whole life trying to figure out injustice and voice it. Her first band Bikini Kill was testament to that. It changed the lives of countless young women (and some men) in the early nineties who felt unheard, abused, neglected, or discriminated against in some way. The raucous off-kilter sounds and raw punk howls of Hanna topped every aspiring Riot Grrrl’s record collection. Hanna became the reluctant spokeswoman for a movement that was less about rioting and more about reclaiming space and voicing social problems, especially feminist concerns. Bikini Kill was unapologetic, brash and determined to change the world.

Jessica Hopper wrote that when she first listened to Bikini Kill, it finally felt like someone was voicing her, her girl self, her problems in a patriarchal society, everything waylaid as ‘other’ by a male-dominated music scene that didn’t check its own privilege. She found songs that spoke to her and acknowledged the glass ceiling you can face even in high school when you’re trying to impress your crushes with your band knowledge and they dismiss you. Hopper wasn’t alone in this revelation, either; all around the globe, young women looked up to Hanna for courage and direction. I was one of them, a shy teenage music lover who was both scared and thrilled by her confident fury, and the realisation that womanhood did not always mean lame. So it was tough when Bikini Kill disbanded. It was tough when her second band, the kooky electronic but no less political outfit Le Tigre went silent. It was gradually announced in the mid 2000s that Hanna had a debilitating disease, which would mean constant bed rest and intense pain for years. This was a woman who did not merely stand on a stage – she proudly owned it. Her frenetic arm movements, microphone bobbing and spontaneous jumps were now a distant memory. Those were hard years, so when she resurrected solo project The Julie Ruin in 2010 with former bandmate Kathi Wilcox, New York guitarist Sarah Landeau, Kenny Mellman from cabaret act Kiki and Herb, and Carmine Covelli, a drummer and filmmaker who directed Le Tigre videos, it was once again about reclamation – this time, of a life.

Hit Reset, their second album, is not 2010’s Run Fast. Their debut was the band’s feelers for what their patchwork sound could achieve, and Hanna’s tentative return to music was about reveling in the joy of a poppier, catchier record and being a bit more playful. After a serious illness, the last thing you want is to focus on discontent. The music was life affirming; there were heartfelt love songs based on her husband’s dedicated carer role while she was ill, there were fun garage odes to being able to party again, there were handclaps, surprising harmonies, unpredictable synths and rockabilly refrains of life in New York. And yet, you can’t have Hanna without the inherent feminism. She’s always thinking of “us girls”, as Hopper put it. Standout tracks ‘Girls Like Us’ and ‘Run Fast’ are anthems glorifying survival, whether it’s surviving illness or putdowns or abuse. She elevates the experiences of girls trying to get by who laugh in the face of disappointment. The album is titled Run Fast for a reason – Hanna is reminding herself as well as her fans that it’s always worth it.

2016’s sophomore effort is darker. Title song ‘Hit Reset’ presents Hanna at her most vulnerable, as she sings candidly about her abusive father. She summarises her father’s presence through his items, cataloguing a redneck American who terrorises his family:

She starkly reveals the impact on her life:

“Slept with the lights on the floor
Behind a chair that blocked the door
Watching from bedroom to plate”.

It is not typical of Hanna to delve so deeply into her past. She is not the sort of person who has ever wanted sympathy. Her work in Bikini Kill was about highlighting everyday problems facing women and those deemed freaks in her society, and her work in women’s shelters was all about usefulness in the face of trauma. The years of illness may have led to some challenging introspection, but the piercing, needling guitar line makes way for a defiant chorus that reinforces survival while recognising that her hurt may never be acknowledged by the one who gave it. And yet, she’ll ‘hit reset’, because, as a survivor of chronic illness, Hanna knows that it is possible to start again. The song offers hope to anyone in a similar situation, as Hanna has always done.

The track is followed by lead single ‘I decide’, which coincidentally features Katie from Waxahatchee in the video clip (who has long been a fan), and is a stripped back celebration of personal agency. The song is heavy on distortion and bare on drums, and there is a menacing schizophrenic solo in the middle that reiterates the catchphrase “I decide”. In the face of gaslighting and confusion and people wanting to take advantage, Hanna stresses that you have the power to leave that situation at any time, and urges you to utilise it. It’s a powerful thing to hear in the face of your helplessness, and the vocals are turned up high over the music to drive the point home.

There is also room on this record for unhinged Bikini Kill-style numbers that explode in a fierce two minutes and shed light on the problems that continue to plague women. Of particular note is ‘Be nice’ where a dude wants a girl to accept his selfish, aggressive behaviour by telling her to ‘be nice’. It’s something girls hear constantly since the age of about three, starting with the nursery rhyme that explains, ‘girls are sugar and spice, and all things nice’. It is hard to be constantly directed by society to internalise your discontent and anger. The song is about male privilege and entitlement, and how it wrecks havoc. The vocal feed is high-strung and laced with ominous synths that jump up and down in intensity, conveying Hanna’s frustration at hearing those words over and over again to justify bad behaviour. In ‘Rather not’, she admits that even she has fallen prey to self-sabotage by following temptation and getting involved with a person intent on causing trouble and harm. “And if you really love me, I’d really rather not know,” she says bitterly, knowing that it is time to let go.

Continued in the vein of Bikini Kill is the tongue-in-cheek, spoken word dissection of the hypocritical and condescending male feminist, “Mr So-and-So”, with Hanna singing “it’s all for show”. She speaks from the point of view of this patronising fan, who exclaims, “I’ll show your autograph to my women’s studies class without hearing what the teacher has to say”. There is always room for sharp roll-your-eyes humour on any record Hanna makes.

It’s not just selfish men who are criticised on this record, but selfish people in general. All sexes are pulled apart in ‘Planet You’, which starts with some big 80s synths, and weaving in and out of the drum rolls and harmonies is Hanna’s defiant, slightly distorted voice dripping with sarcasm. “Start a Kickstarter for your heart”, she says, which is the kind of social commentary that just hits the mark.

Another display of vulnerability emerges from the middle of the record in ‘Let me go’, whose airy electronic melodies cover up the inherent darkness of wanting to die when you’re just so ill. Hanna sings to her partner in her lowest moment, imploring him to ‘let go’ because he doesn’t know how ‘many more memories there are to take’ of her pain. It’s cathartic, and so are the rhythmic guitar cranks that hold the beat. Hanna is not afraid to show that even she, icon of strength, can feel so bad she doesn’t want to exist. But the record is named ‘Hit Reset’ for a good reason, after all.

The idea of living up to one’s own mythology is explored on ‘Recordbreaker’, which is the catchiest garage song on the record, reminiscent of Vivian Girls in their heyday. “Everyone wants a super hero, record breaker for their mentor,” Hanna starts among the jangly guitars, before dissecting her loneliness onstage when she knows she’s giving in to illness and can’t go on singing anymore. It’s a call and response song that sounds uplifting despite its bittersweet idea that even your icons can’t stand on some days. Hanna just wants to be open about her struggle, and she’s deserved it.
Second single ‘I’m done’ has a Britpop feel and asserts the feeling of having had enough. Again, it’s the selfish people that just won’t let her alone. Like other single ‘I decide’, the song revolves around a one liner and reinforces it repeatedly as a personal mantra.

Kathi Wilcox’s sympathetic steady bass, rooting the band while Sarah’s guitars go haywire to match Hanna’s emotions, and Carmine’s impeccable rhythm and stripped back drumming, and Kenny’s deft synths all work together in a way that shouldn’t work but somehow does. There’s something for everyone on here, punk, garage, lo-fi pop, and electronica all mesh together to provide a lively, eclectic soundtrack to Hanna’s political and deeply personal commentary.

There are some moments on the album where Hanna seems to give in to a bit of aimless pop such as on ‘Time is Up’, whose lacklustre emotional tones seem out of place on a survival record. Luckily the album ends with yearning, poignant piano ballad ‘Calverton’, which is brave for also being out of place and yet important. Hanna doesn’t always sing like that, and on this song she’s not an icon, she’s not a leader of a movement, she’s not the strong one; she’s a wistful, vulnerable woman looking back at her life and her defining relationship with her mother. “Without you I’d still be on my deathbed full of wishes,” she says earnestly, and you know that for all her fury and brazenness, Hanna is also a woman with a lot of heart, perhaps too much. This is an album deserving of her legacy, and sure to win over new fans who will be hooked by the grooves and stumble into the kind of raw honesty that gets one through the dark days, even when you feel like you can’t listen to anything that might challenge you. It’s probably because it makes you care again, and that’s what Kathleen Hanna always does for me.

Hit Reset is out now on Hardly Art. Order it here.