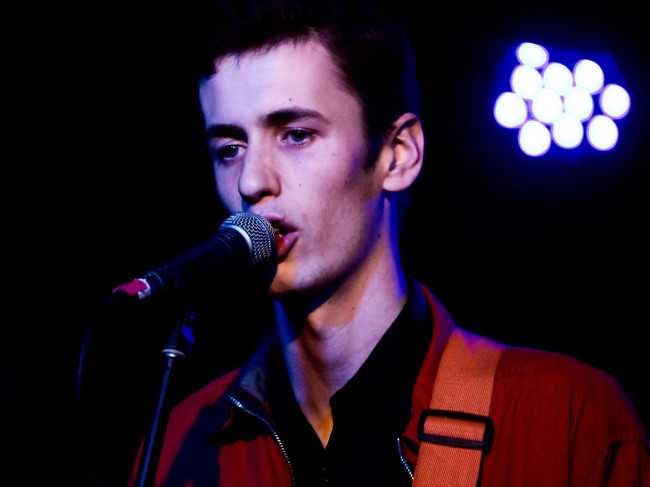 The Goon Sax have recently been enjoying a quite rapid ascension in popularity as a well-known presence within Australian music, along with growing attention from overseas. Before taking off on a European tour, they play what is billed as their last show for “quite a while” in their home city, at The Foundry with support from The Mosaics and Scraps.

The Mosaics are a young local indie-rock band which features James Harrison of the headline act on bass. They play a set of straightforward but effective pop songs as the audience starts to build and take notice. Their approach is markedly casual and laidback with the band’s withdrawn vocals and simple arrangements.

Scraps, who has been playing underground shows in Brisbane and beyond for many years, follows with an engaging mix of eerie dance music and 80’s-style synth-pop. The set succeeds both as an invitation to dance and in creating a bizarre dreamlike atmosphere in the room. It served as a great way to grab the audience’s attention and amp up the excitement at the venue.

The Goon Sax come out to rapturous applause by the young audience. They’ve developed quite a loyal following in Brisbane recently and the set that follows is the most confident I’ve seen them play yet. As usual, the level of song-writing is exceptionally high, especially for such a young group. Although on the surface their music belongs to the style of jangly indie-pop which populates much of popular Australian music, they’ve managed to carve out their own distinct personality as a band. This is in no small part due to their ability to present typically mundane topics and reflections on day-to-day life in exciting and unpredictable ways. Many songs they play from their LP Up To Anything demonstrate Louis Forster and James Harrison’s formula of giving their lyrics emotional resonance through strong melodies and the laidback sincerity of the vocal delivery. The instrumentation is simple and understated throughout the set, a perfect accompaniment to the rawness of the subject matter of their songs.

After not having seen them in nearly a year, what strikes me the most is how well-honed they’ve become in a live setting, each song is delivered with such urgency and confidence that it’s a joy to watch. The opening guitar riff of Boyfriend is met with a rush of excitement from the crowd. This song, the second single from Up To Anything, is perhaps the highlight of the night, with its wonderfully infectious chorus being perhaps the best thing the band has produced to date. The set seems to finish in no time and I’m left with song fragments and choruses stuck in my head, slightly dismayed that I won’t be able to see them live again in perhaps a long time.