The FULL story of the 10 records David Nichols took round to The Legend!’s house in mid-1986 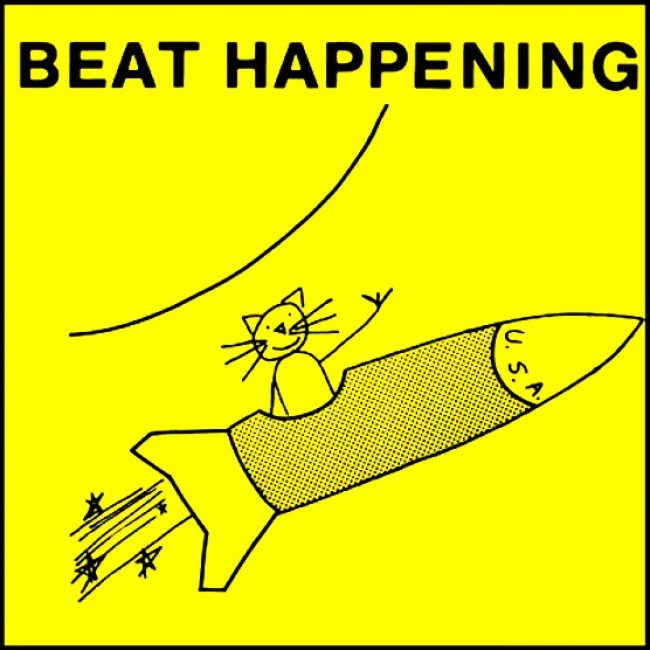 The full story needs a caveat. Over the last ten years I have found my celebrity accelerated in some quarters (from a 0 to a 1) by a story in which I apparently am a major hero. I visited Calvin Johnson in Olympia in April 1986. He gave me some copies of the first Beat Happening album to give to people in the UK. I chose to donate one to The Legend! He liked it and played it to Geoff Travis who decided to release it on Rough Trade in the UK. As far as I know this did not make a major impact on Beat Happening’s career or anyone else’s. I gather that the album did leave a lasting impression on The Legend! and that he later became interested in other bands from the same geographical region as Beat Happening, like Nirvana.

The silly postscript to this story is that somehow it becomes one of my major claims to fame. I am not going to get up to check but I believe it is related in the booklet to the Beat Happening box set, in an Everett True book, and in some other book somewhere – at least three places. Why I even have to be mentioned in this story is unclear to me, as I was hardly even a conduit, but perhaps more importantly, the whole story is of not much being achieved. A record which had already been released, was released in another territory. It was quite a good record, but not the best by Beat Happening.

I suspect The Legend! remembers that day I went to visit him about as well as I do. He wasn’t expecting me. I chose him because I had read his writing in the NME – and maybe even one or two issues of his fanzine. Of course, I must have read his fanzine, because that’s where I would have got his address. Based on what I’d read I thought he would really go for Beat Happening (I was right). Most weeks, apparently, he wasn’t likely to be home on that day, which he later mentioned because what if there’d been no-one there? Well, I would have left the album at the door or something. He made me a cup of tea, I remember that. I seem to recall he had a Buzzcocks compilation album, something recently released but from the group’s initial incarnation, perhaps he had written sleevenotes for it. Perhaps he also had a record by The Ex. When I say ‘he had’, I mean, he had them out in the open as if he had recently been listening to them, which is pretty likely when you think about it. I don’t remember anything else about that day. Those days in London merged together, they were usually pretty crappy.

Along with the Beat Happening LP I had a single I had paid to press up, by Rabbits Wedding. They were a band from Perth who had relocated to Sydney and who I really liked. I gather The Legend! was not that into the record. Neither was Sandy Shaw, who I sent a copy to (she sent me a nice letter though, and a meditation booklet). I do recall being at a show by possibly The Soup Dragons or perhaps The Chesterfields and saying to Michelle Cannane, who was also there (obviously), ‘Rabbits Wedding shit all over this group’, or words to that effect. She agreed with me as though I had said ‘red things are red’, i.e. too obvious to even comment on. I know this is a truism, and I never care for them, but a lot of those bands in London in the mid-80s, even the ones who made good records, played really terrible shows. As someone who’s never been able to play music but made tons of records, I shouldn’t comment, but at least I did know the difference between people who could/should play their instruments and people who should/couldn’t.

The first Cannanes record, which had been recorded before I left for the UK in March or April 1986, was not pressed until around October or November of that year, by which time I was back in Sydney. I sent a copy to The Legend! and he wrote glowingly about it in the NME, which caused The Cannanes some amusement and led to letters from major record companies in the UK demanding copies. It was a ridiculous situation.

If I had brought The Legend! ten records from Australia for his perusal, I imagine they would have been by Chads Tree, or The Triffids, or The Lighthouse Keepers, or The Laughing Clowns who I think he already knew about and appreciated and, come to think of it, that might even have been something else we talked about. But these were all bands who had records out in England already (apparently not so brilliant a coup as Rough Trade rereleasing the first Beat Happening record). I remember seeing a Chad’s Tree single in the HMV shop, it made me feel like things were happening in Sydney and/or Australia and fuck all was happening in London.

But the fact is I only brought him two records, not ten, and he really liked one of them, for which I’m glad.

A couple of months later I called the NME and asked to speak to the Legend!. Some guy said that the Legend! had met up with Prince (who was in London at the time and everyone was agog) and he and Prince were at the Legend!’s house listening to the new Shop Assistants single. It seemed unlikely but who knew with the Legend!.

One Response to The FULL story of the 10 records David Nichols took round to The Legend!’s house in mid-1986