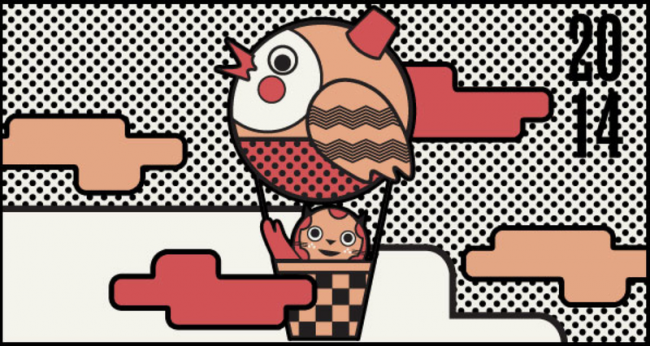 If everything has gone to plan, I’ll be at the Brisbane leg of this year’s Laneway festival by the time you read this. This year’s line-up is another strong one and I’ll be looking to catch a number of acts we’ve written about on Collapse Board, both favourably and less so – Lorde, Savages, Warpaint, Earl Sweatshirt, The Jezabels, Haim, Dick Diver, Mount Kimbie, King Krule,  Kirin J Callinhan, Kurt Vile, Adalita, Unknown Mortal Orchestra, and all the way down the bill to The Creases, the triple j Unearthed competition winners (depsite releasing a single on Rough Trade) opening the festival. At least I’m hoping that’s how it’ll roll out, at the moment there’s the usual accreditation and missing email/e-ticket issues that are plaguing me so far this festival season.

A number of Laneway acts have new songs/new videos so this week’s playlist starts there.

Chvrches covering Bauhaus is an intriguing proposition until you find out that it’s a song they’ve done for a soundtrack for a film called ‘Vampire Academy’ about vampires at a boarding school and directed by the same guy that did ‘Mean Girls’.  Then it becomes a bit less appealing.

Collapse Board favourites from 2013 have got a new video clip and, in a surprise to no one, it’s in black and white. Despite everything I’m really looking to seeing and photographing Savages. Unlike the other states, it should be dark by the time they play (6:30pm – 7:15pm), which is possibly the only good thing about lack of Daylight Savings in Brisbane (although they’ll probably play in the dark and annoy all the photographers).

Adalita – I Want Your Love

We spoke to Adalita recently about the influences for her second album, All Day Venus, and about the challenges of being a solo artist. This week she released her latest video, ‘I Want Your Love’ (sadly not a cover of the Transvission Vamp song).

Although a latecomer to Cass McCombs, his recently released and sprawling Big Wheel & Others double album has made me a convert.  He’s supposed to be releasing four video clips for four different songs during January and given that today’s the last day of the month, I’m assuming that the last one will appear sometime today.  In the meantime, here’s the first three.

Nothing new from Kirin J Callinan, but over the last couple of years he’s put out some of my favourite video clips. Earlier this week his debut solo album, Embracism, made the final shortlist for the Australian. It might have even been my favourite album of last year. I say “might have” as I pre-ordered the album in June when he played a show at The Zoo in Brisbane, contacted the label in September to find out what was happening, and was told that they didn’t press enough copies in the first run but that a second set would be released in November. It’s almost February. It did well in the end of year polls, I’ve heard it’s good, but I guess I might never know.

I’m just going to put this here. Although three songs were previously available, the whole set was recently discovered. The full story is on Dangerous Minds and to quote them, “If this doesn’t get you off, you don’t like rock and roll…and get the fuck off this blog”.

Bruce Does Brisbane. The liner notes for Springsteen’s new really-quite-patchy-and-Tom-Morrello-smeared-but-it’s-The-Boss-so-two-thumbs-up-and-four-stars-from-us album, High Hopes, give a shout out to The first Saints album, (I’m) Stranded. It’s a shame that he decided to cover a Saints song from 1986 when they were sounding like a poor man’s mid-1980’s XTC rather than something from any of the band’s first three almost flawless albums ((I’m) Stranded, Eternally Yours, Prehistoric Sounds). Having said that, the new album also includes a disappointing cover of Suicide’s ‘Dream Baby Dream’ so maybe it was a better move to avoid all the classics. Compare and contrast.

The legendary Scientists are returning with their original line-up and playing a show in Brisbane at the end of March.  I’ve never seen a gig at The Transcontinental Hotel but I might have to introduce a new venue to my more typical haunts, even though it’s an eye-watering $45.  There’s more compare and contrast courtesy of the two recent visitors to Australian shores, with Melvins & Mark Arm‘s 2013 cover of ‘Set It On Fire’.