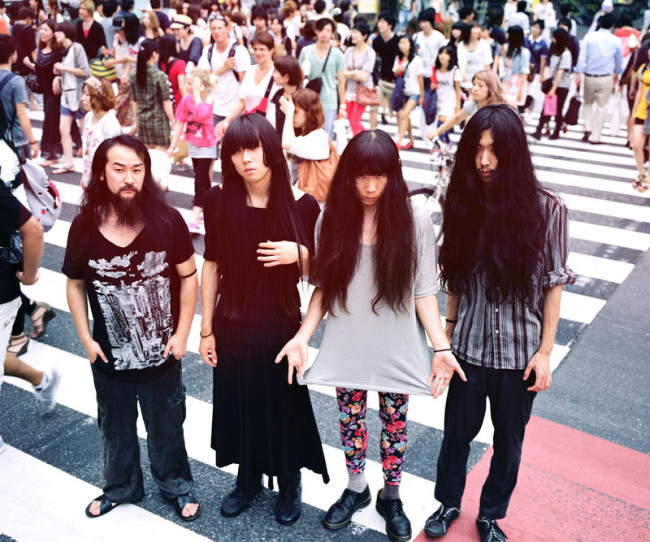 Bo Ningen – Henkan Last weekend I went down to the Gold Coast for this year’s Big Day Out festival and saw some of the worst bands in the history of music. However, thanks to a recommendation from Collapse Board contributor Brendan Eales, I also caught Japan-via-London psych-rock four piece Bo Ningen, who, despite playing the festival’s smallest stage in the middle of the afternoon, were the best thing I saw all day by a country mile. It’s so rare to be surprised by an act at one of the mainstream Australian music festivals as the organisers are risk adverse and just don’t book surprising acts from overseas, just the mainstream ones with plenty of radio play that will pull a crowd. Even better than seeing Bo Ningen at the Big Day Out was getting to see them for a second time a couple of days later at a free instore at Tym Guitars. There’s a few video clips on Youtube, including a song featuring Jehnny Beth from Savages (‘Nichijyou’) but ‘Henkan’ is the better song.

Roku Music – Collider Like a lot of Brisbane bands, Roku Music have obvious reference points. Having seen the band play a few times, what really strikes home is just how good those guitars sound. It takes a couple of minutes before the guitars rise to the fore in Collider, the first song from the band’s debut album, but (a) it’s worth the wait; and (b) the rest of song is pretty superb anyway.

Liam Finn – Snug as Fuck You always have to feel a bit sorry for Liam Finn as no matter how many pop gems he comes up with, he’ll never be able to escape the weight of his family name. Sounding a whole lot like his old man, ‘Snug as Fuck’ is too weird to be a Crowded House song but Beatles enough to be something from one of Neil Finn’s solo albums.

SKATERS – Miss Teen Massachusetts Slightly unsure about this but chucked it in anyway. The intro sounded like it was going to burst into something that sounded like Elastica but it sails far too close to first-album Killers after that. Still, I’m sure that’s something that might please their radio plugger and help their bank balance. Having read the accompanying press release (choice quotes: “Manhattan is more than an album – it’s a statement of purpose and a portrait of life in New York City”, “Skaters chose their band name because it captures their young and fearless attitude”) I’m even more unsure, but at least we’ll always have the intro.

The Amazing Snakeheads – Flatlining WOAH. I didn’t expect this in a million years when I pressed play. Sometimes trawling through random songs that comes into my mail box or pops up in my social media feeds can be worth it. Being Australia, we’re a bit behind the rest of the world, and this has been out a while in the UK. Sounds a whole lot like Morphine and that’s no bad thing.

Agender – Mani Pedi Agender are back with a new album in March. The trouble with Agender is that they remind you just how good/better Romy Hoffman was before she discovered punk rock, back when she was recording under her Macromantics moniker.

Charli XCX – Allergic To Love Charli XCX popped up without much fanfare on the Parklife bill a couple of years ago, playing an early afternoon set to a small crowd months before the music industry hype took over and started to push her as the ‘next big thing’. That didn’t happen so instead she’s discovered punk.

EMA – Satellites The Laneway festival starts again next Friday with another knock out line-up. The best thing about Laneway is that it puts on a host of new /first album acts, most of who would probably never come over to Australia on their own tours. The worst thing about Laneway is that so many of these bands then go on to release follow-up albums a year or two later after, when the fickle music industry has moved on and just vanish into the abyss. EMA, who played Laneway in 2012, didn’t disappear off the face of the earth and is back with the first single from her upcoming new album, The Future’s Void.

I Break Horses – You Burn Something that was emailed to me in a press release.  I was impressed they got through the whole thing without mentioning Fever Ray as much as I was impressed by the song and the video.

Dum Dum Girls – Rimbaud Eyes Well nobody told me there was a new Dum Dum Girls album out this week. Sub Pop are even tormenting me by putting the whole album up to stream on Soundcloud but not allowing it to be played in Australia. Maybe you’ll have more luck wherever you are. The first single, Rimbaud Eyes, is available to us in the Antipodes though.

Violent Soho – Covered In Chrome It’s an Australia Day long weekend which means that it’s Hottest 100 time. The battle at the very top looks like it’s between the artist Australia is trying hard to assimilate as one of their own (i.e Lorde) and the Australian David Gray (i.e. Vance Joy). Brisbane’s Violent Soho are expected to be placed pretty highly with this song. It’s nice that after all these years the rest of Australia finally caught up.