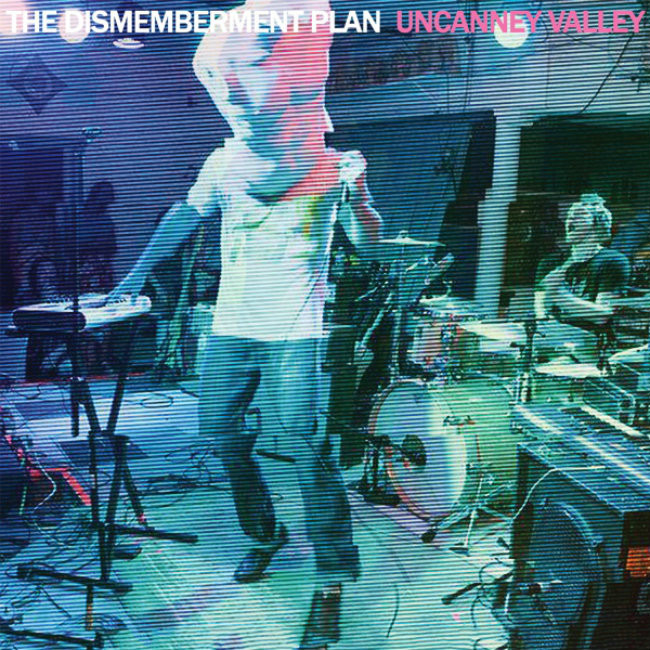 Ten-plus years on from their last album, The Dismemberment Plan is a lighter, altogether jauntier thing. This isn’t a criticism; it’s just impossible not to notice.

Back when the century odometer was rolling over, the band helped change indie-rock from a testosterone flexing of guitar/bass/drums into something more electronic, more in love with outside influences, and way, way, more danceable. I saw them countless times back in the day, and every single time they were one of the best things I’ve ever seen. The high point may have been a show in Portland, Maine attended by less than 10 people (it was a Sunday). They played just as hard as they did the night before to 750 people in Boston. They took requests. They thanked everyone for coming.

They wrote songs of urban alienation, an inability to connect with one’s fellow humans, in a way that was both devastating and funny. The band would unironically perform Jennifer Paige’s ‘Crush’ in a way that foregrounded the song’s desolate heart, tell pirate jokes between songs, sing about being a ‘Timebomb’ and exploding all over an ex’s life, make you laugh until you cried then cry until you laughed, and they got people to dance all over the place who weren’t prone to dancing. In short, they were obliterating lines between indie/mainstream, pop/rock all over the place at a time when that sort of thing was not very popular at all.

And apparently they’re still doing it.

And lest you assume they were just taking the piss, or one more rock band doing ironic covers of pop songs, they tried to repay the gift, their declared awe of Outkast, with this song.

And no it’s not Outkast, but the cross-pollenization, the obliterating of distinctions, played a huge part in reshaping attitudes within the underground.

So this isn’t just one more reunion. And I’m pleased to say that Uncanney Vally justifies its existence, the re-emergence of the band.

By the way, anyone have any idea why they misspelled ‘uncanney’? It’s a great title, the way it references robotics, near-human qualities, and revulsion. But as far as I can tell, D-Plan are the first people in the world to deliberately misspell uncanny. All theories/speculations/definitive answers appreciated in the comments, thanks.

So yeah, it’s a more upbeat Dismemberment Plan. I remember reading an interview with Leonard Cohen, years ago when I was still a teenager struggling to come to grips with teenage-level amounts of angst & worry, and LC said that he enjoyed getting older b/c one’s anxiety lessened, that you became more comfortable in your skin.

As I straddle a transition from my 30s into my 40s, I’m pleased to report that Leonard Cohen was right. It’s probably the best thing about getting older, though results may vary depending on how you go about it.

And The Dismemberment Plan must have done it right as well, because Uncanney Vally is outstanding,a triumph of maturity.

Singer Travis Morrison has a novelist’s eye for detail, still poking fun at the things that he loves and shouting against the things that he hates. Anyone who can craft an opening line like ‘You hit the spacebar enough and cocaine comes out / I really like this computer’ is a writer after my heart. Hell, if you reduced ‘Lookin’ to its lyrics/chords/melody, it could be a hit country song with its sweet emphasis on the little things in life, the sentimental wordplay.

The opening of ‘Daddy Was A Real Good Dancer’ lifts so blatantly from Red Rockers ‘China’ that I burst out laughing when I first heard it. In fact, since I went to the trouble of looking it up on Youtube, and having now seen the video for the first time, let’s take four minutes and watch a really, weird fucked-up time capsule together.

I also learned that Red Rockers were from New Orleans, and this song reached #53 on the US pop charts. Strange world.

So back to the album. Uncanney Vally’s great. I’m assuming there’s two types of listeners out of there–fans of the band’s previous work and people who’ve never heard them before–and this album works for both. Oddly enough, I think it’s the earlier fans who might struggle with it.

I’d advise them to keep trying. The album isn’t as sunny as you think it is (see ‘Mexico City Christmas’, ‘Invisible’), and whatever angst may have been sacrificed in the process of growing up has been replaced by a perspective and wisdom that allows the darker moments, when they do surface, to hit harder and deeper than they did 15 years ago. After the first couple of listens, I was ready to write this album off, or at least damn it with faint praise, but I’m over a half-dozen now and it just keeps getting and better.

There’s no evidence for me to embed at the moment. Go listen to it here while you can:

One Response to The Dismemberment Plan – Uncanney Valley (Juno)