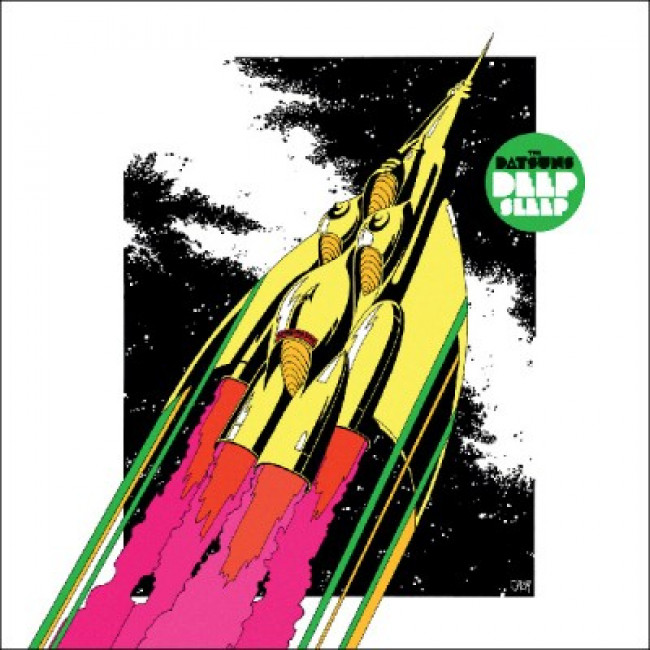 Honestly, I didn’t mean to pick two solid RAWK albums in a row. As usual, I had no idea what to expect when I drew the Datsuns from the line up.

But FUCK. If I could boil this review down to one sentence, it’d be this one: the Datsuns have swooped down from their starfighters to destroy the future.

Oh, don’t get me wrong. Deep Sleep is just as, if not even more, derivative than Manipulator. But, rather than nurse hipsters’ good taste, the Datsuns dropkick their hard rock/sci-fi mojo right into their faces.

You know what I mean. All that juicy wah-wah. Riffs like monuments. Jet thrusters that rocket to the cosmos (from the tombs, if you’d prefer). Really cheap Japanese Godzilla ripoff movies with stylized robot giants and cheap blinking effects. That old Graviton ride at the state fair and its glitzy futuristic trappings, where “In Da Gadda Da Vida” sounded like an alien world while you were spinning round in the darkness.

It’s the sound of rock and roll without the misty-eyed progressive schmucks. It’s the holy hard rock trifecta, but with extra ounces of Purple and Black and minus the stolen blues.

Yes, there are guitar solos. Proper, shameless shredding, the sort that launched both Hawkwind and UFO to the frontiers of space. Songs like “Looking Glass Lies” and “Shaky Mirrors” thrash,with a laser-focused, earth-razing power, handed down from the elder council of giants, from Budgie to Iron Maiden. Others, “Creature of the Week” and “Bad Taste”, ooze with the uncontested machismo that heavyweights like Rush and Ted Nugent wield.

Maaaaan. I don’t smoke, but if you do, I’d suggest you take a long drag of the heaving, swaggering Black Sabbath noir of “500 Eyes” and blow it right in the eyes of some sissies like me that don’t. Or take a hit from the tie-dye-tinged “Sun In My Eyes”, with its nitro-charged acoustic stomp that touches base with Love.

What clinches this album for me – that is, the key pebble that tips the scales in the Datsuns’ favor – is the closer and title track. Here, the band ease on the clutch for a truly righteous kiss-off, with one of those indelible licks like Satriani would stamp the eighties with via “Ice 9”.

Now, this is the paragraph where I try and explain why Deep Sleep works so damn well. Usually, I can devise some elegant, provocative answer that remarks on some shortcoming of our times. But the best I can say is that the Datsuns offer one helluva fun ride, nothing more and nothing less. No starry pretentions, no post-modern self-loathing, no tedious layers of production or basement-level lo-fi murk, no activist leanings or blatant misogyny. The Datsuns just wanna rock, and they don’t care if punk or grunge ever existed. Which may be, in fact, why this blows over with me so well, since punk and grunge didn’t exist for me either until about three years ago. (I tend to forget that.)