The Collapse Board Interview – Sacred Paws 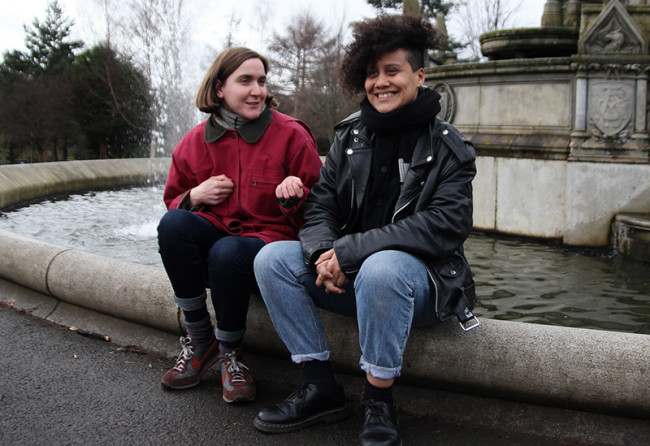 Formed by members of old Collapse Board favourites, Golden Grrrls, Shopping and Trash Kit, we were always going find it hard not to love Sacred Paws. The duo – guitarist Rachel Aggs and drummer Eilidh Rogers – released their debut album, Strike A Match to widespread acclaim in 2017, culminating with it winning Scottish Album of the Year (SAY) Award the same year. The band’s follow-up album, Run Around The Sun has just been released. Thanks to the marvels of modern technology (when we eventually managed to get it working!), we conference-called Rodgers in Glasgow and Aggs in L.A. from a hotel room in Perth, Australia about their new album, their musical inspirations and touring with their label bosses, Mogwai.

CB: Did you feel under more pressure this time, especially after winning the Scottish Album of the Year for your debut album, Strike A Match?

ER: I think we would have felt pressure anyway. I think we always put pressure on ourselves and hope that it’s good enough. But I think that we were just really chuffed that people liked the first album. So we were hoping that if we did something similar that people would like it a second time.

I think the only thing with this one was that we knew that the first album was a cull of all the songs that we’d written over a large period of time. The label were like “We’re keen to get you back in the studio” so we felt like we had to get it together and write the songs.

We had a few songs that we’d been playing live for a while for when we got back into the studio, but we sat down and kept writing until we had enough songs and then went into the studio.

CB: Did you record it at Castle of Doom Studios [founded by record by Mogwai and producer Tony Doogan] again?

CB: Is that a Rock Action [the Mogwai-founded label Sacred Paws are signed to] requirement if you’re on their label?

ER: No, not at. It’s just great that they give us access to it. We’d never recorded in a studio that wasn’t ramshackle before and it was amazing to go to that studio because it’s got everything. It’s pretty great and Tony’s amazing.

CB: What do you think working with Tony has brought to the albums you’ve recorded with him?

ER: I think Tony is very good in encouraging us to try new things, especially on the first record. He was really encouraging for us to get a brass section in and things that we thought were for other bands, not for us. He was just like “Whatever works, we’ll just book a brass section and we’ll get it recorded.” So I think he’s very supportive and you’re gently encouraged to do things like “Oh, maybe we should this, do you think this needs something?” and then we’d have a think and come up with something to add. It was good.

CB: Some of the older interviews I read, probably in the period after the first album had been released, were talking about Rachel moving up to Glasgow. Did that happen in the end?

ER: Yeah. Rachel just lives around the corner now. I can’t even remember how we did it before. It was so stressful. Now its just a lot easier.

CB: Because you had that long-distance working relationship before, was it easy transitioning to being close geographically, as opposed to setting aside that time and having to be focused and disciplined with the limited time you had to work together?

ER: Yeah, it’s been nice to just get together and make music without the pressure of the time constraints. I guess that’s just what normal bands do, but for us it feels like a real luxury. We can just get up, get coffee and hangout as friends. So it’s been really good. I’ve not booked as many trains in the last two years.

CB: I saw in one of your older interviews that you were using Megabus [UK low cost, no frills bus service] and I can’t imagine doing that from Glasgow to London on a regular basis.

ER: Yeah, I think that was in the very beginning. Megabus was very challenging so we started getting trains and flights but now we don’t have to, so that’s good.

CB: What impact did winning the Scottish Album of the Year have on you?

ER: I think it’s made us feel a bit more comfortable in what we do. I think before we were always a bit critical and unsure but I think now we’re kind of okay about it. People have been positive about us and it’s allowed us to believe in it a bit more.

CB: There was something in your award speech that I was curious about, when Rachel said, “We’re not the most confident people. I think playing music has a lot to do with confidence.” Did that mean that playing music gives you confidence?

Rachel Aggs: Yeah, definitely. I think we were never on paper the type of people that would, to be honest, get on a stage. But I think that I sort of wandered into it. And then once I was on a stage for the first time, I was like, “This makes me feel amazing!” and all my social insecurities fade away when I get to play. And especially with Eilidh. I think we found a space that made us feel like we just sort of forget ourselves when we’re playing together. we have so much fun playing in front of people that it sort of transcends that self doubt or insecurity. So that’s one thing. But then to have the record be put on a stage,through the award, was another kind of owning it.

CB: That’s a great answer. I wasn’t sure if you meant that it was difficult to do music or you struggled to perform on stage because of lack of confidence or if it was completely the opposite.

RA: I don’t think we ever struggled. It’s more like the in-between things, you know, this stuff! We didn’t do it because we wanted to be famous or anything. It’s not about having a public persona, it’s about making something that makes you feel happy. For me, music’s been like a tool to deal with life rather than a way to big myself up. To have someone “Actually, you’re alright at this,” and for people to like it, was like “Oh, really? Because I just do this fun.”

CB: I know in some of the interviews you’ve talked about wanting to make people dance but I just enjoy listening to you as it always puts me in a good mood. So there’s that side of it at a very high level but then I find that when you listen closely, what you’re doing musically sounds so intricate, there’s so much going on and you can pick up new sounds each time you listen. I was wondering where this came from so who were your musical inspirations?

RA: I think we both listened to like a huge different mix of things. I guess there were certain guitar players, I really like Rise Kagona from the Bhundu Boys, and the Zimbabwean style of pop music. A lot of the riffs are based on Mbira, the metal thumb piano. I just like things that are not what you hear on the radio all the time. To me that sounds more intuitive sometimes, rhythms that I find exciting. I often look to the continent of Africa and it’s taught me a lot, that’s my favorite guitar playing. But it’s not like we’re trying to do that.

CB: I think it’s the combination of two different musical worlds that makes it sound so exciting. Putting the same question to Elidh, what drummers have inspired you?

ER: As I got a bit older, I just loved all the different ways you can play drums. I really love an improv drummer called Chris Corsano. And Jim White, who’s obviously Australian. Just people that approach it in their own way.

When I first started playing in bands, I was really into the Dirty Three, that was a big inspiration. But also people like Janet Weiss. There’s just so many great drummers out there that have their own way of doing it. I love the loose way that Jim White plays and it feels more musical than just playing the drums. We don’t really do a lot of this stuff, maybe we’ll do it as a side project one day.

RA: Yeah. Who knows what could happen!

CB: You toured with Mogwai and obviously you have that label business relationship with them but it’s not the most obvious combination of bands to tour together. How that experience was for you?

ER: We had a great time. It was a really positive experience although I think it was challenging for us. I think maybe the audience didn’t quite understand what was going on.

RA: I feel that Mogwai, as a band, are super wide open. I don’t know if they were like trying to test their audience, I don’t think they really thought about it. It was just like “We love this music, we love this band”. I felt like some of their audience was slightly confused by us but I remember that by the end of the tour, there was someone wearing a Mogwai t-shirt in the front row of our show, singing along to one of our songs and I was like “We found him! We found the one person that gets it!”

CB: I think every time I’ve seen Mogwai, everyone in the front row is there taking photos of Stuart’s pedal board.

RA: And I don’t even have a pedal board to take photos of!

ER: That’s why they were confused. They were like “How is she making those sounds!”