The Collapse Board Interview: Glitoris 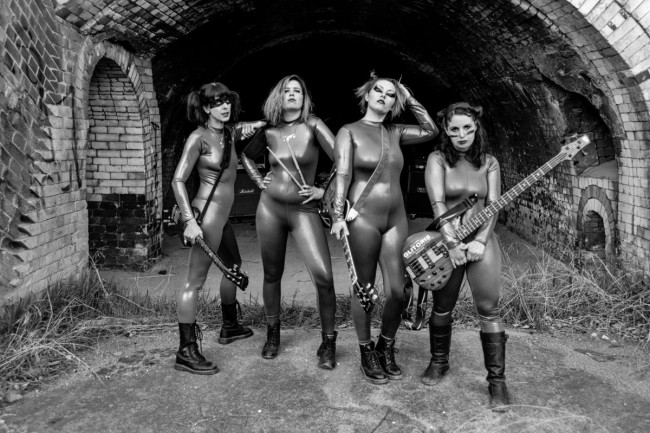 Keven 007, Malcolm, Tony and Andrew are the Canberra four-piece Glitoris.

Back in 2017, Everett gave their ‘Trump Card’ single his Song of The Day blessing.

“It ain’t pretty. It ain’t nice. It ain’t all smoothed over or sucked dry. And the battle ain’t lost, I tell you. Not when we have ladies like Glitoris out here. They play a Big Muff. Well, of course they do. Of course they fucking do.

As one of their YouTube ‘fans’ remarks: “ROCK-N-TRASH, LEFT WING BS WITH NO RESPECT”. That’s the pull quote, right there.”

The band released its long-awaited album, The Policy, at the start of November.  Lauren Curtis spoke to the band’s Andrew Glitoris about the album and the upcoming shows.

Andrew Glitoris: That was a pretty big process.  What’s interesting about “The Policy” is that it started out as one song and became two.  It started out as being one thing and then it turned into “The Policy” then turned into another song on our record, the opening track called “Warriors”.  It’s quite funny because you think, “How on earth could those two songs have come out and considered being the same song?”, but they initially weren’t.  So “The Policy” came together mainly out of just songwriting.

We spent most of 2017 writing.  We had a few sketches and ideas that we’d already kind of got down and then we started forming that song and it came from a number of different directions.  I had the idea of a really heavy underpinning kind of triplet-orientated kind of like “Savagery” by Metallica and creating lots of big riffs.  Andrew had some ideas around melody. She brought a lot of the melodic content to the table and she’d actually come up with the riff on an old bass guitar which Keven then nailed down even further into what you hear.  Then the lyrics were sort of nutted out.  We really liked this idea of being  completely upfront and almost confrontational in how we deal with being in a minority group in the workplace and in life generally and thinking “Okay, well this is the situation.” In some ways you can’t control the situation you have and it’s difficult to control the actual here and now reality of what it means to be in a minority group.  So, what you can control is your reaction to it.

We decided that we did not want to portray a victim or kind of a downtrodden mentality to our response to it and it was going be you know, “Ok, fuck this, we’re angry about this, but my God are we going to do this in the most confrontational way we possibly can and we’re going to be unapologetic about doing it in that way and we don’t care if it’s un-Australian and we don’t care if it makes people feel uncomfortable, because we mean it.”   So, we were really committed to doing something that was kind of hard hitting and sounded epic.

People don’t write music anymore that sounds big and I think we were getting frustrated.  Last year we felt very disillusioned with where the sound of a lot of music that was coming out was going.  We felt that a lot of it sounded weak, even though perhaps it contained strong messages.  Musically it wasn’t fat enough to support those kinds of themes.  When you think about a band like Rage Against The Machine or NWA, you know the strength of their message is supported with equally strong music.  We were all in a position where we were getting frustrated with what we feel is the lack of ambition and also the lack of wanting to reach for a really big almost epic kind of sound.  So, we thought “Screw it! We’re going to do it!” If that makes us sound arrogant or if that makes us sound like we are being too confident we just think “Fuck it, yeah we are!” and we’re not going to apologise for that and we won’t.

CB: I was wondering how your relationship to writing music has changed since the beginning of Glitoris?

AG: Yes, I mean there’s no doubt it’s got more ambition, there’s no doubt that in the beginning we were writing in a very spontaneous way and we were writing in a very trashy punk rock way. We all understand how songs work.  We all understand a range of instruments and we’ve all had musical training and we’ve got a very strong understanding of dynamics and arrangements. But we’re also pretty kind of keen on being completely fearless in our songs lyrically as well, and that’s something we just don’t compromise on.

We don’t write for triple j.  Far too many artists do, with that idea in mind that they have to be played on triple j.  I mean can you imagine the sound of “Spit Hood” for example? triple j were not anywhere on our agenda when we wrote a song like that. I mean, in the mainstream music industry we’ve had a lot of success and we’ve had a lot of coverage but at the same time that’s not what we’re doing it for. And with a song like “Spit Hood”, there were some people who were saying  “Do you really think that was the right thing to come back with? A two-minute confrontational really heavy song about the Don Dale Detention Centre?” Well sure! We felt strongly about it and we wanted it in the public consciousness.  That means more to us than whether or not our music gets played on triple j.

CB: Were there any challenges you faced with this album?

AG: To be honest the writing of it was fantastic.  We had a great time writing it.  It was written in various ways and it’s interesting because we all bring all songs to the table, so the album really was a collective effort from the four of us. Some of us have more to do with some songs than others.  Some of them took a week to bring together and some of them took ten minutes to bring together.  A song like “Sex Video” was written in literally half an hour but a song like “The Policy”, now that one was really interesting because some parts weren’t really nailed down until we were in the studio.

The recording of the album was in the main part great but obviously recording has challenges and musicians are at their most vulnerable in the recording studio. Everything that’s played back, you know it is what it is, and there’s obviously some musicians that will think some songs should sound a certain way and others that disagree with that.  There are all kinds of issues and if issues are going come out then I can guarantee they will come out in the studio. It’s a pressured environment.  We spent weeks in the recording studio with Jay Whalley and we recorded twenty-one songs.  There’s thirteen on the record and we’re holding some back for future releases.

Most of the time it went really well, and we felt like we were flying, but of course there were one or two days where everything just goes to shit and you’re questioning what you’re doing again and “Why is it this hard?” The psychology of it all really comes into play. If I’m honest there were days in the studio that were really hard but by large the whole album writing, recording, production process was amazing.

CB: So Glitoris are from Canberra, so I was wondering how say crowds in Sydney or Melbourne compare?

AG: That’s a really good question. I mean we recently did a huge national tour with Regurgitator which was incredible. It was interesting to see, to be honest, and we got a better than expected reception from everywhere we went.  It’s funny because our hometown show (Canberra) was one of the more difficult ones for us, whereas there were shows that we did in Hobart, and the last shows in Perth and Adelaide, and they just absolutely went off.  It was interesting.  I mean at the moment we’ve had a great reception all over the place. Another question we’re being asked currently is “Oh, you’re just going to tour The Policy and headline but where’s Adelaide and Perth?” Don’t worry it will be in 2019.  We definitely want to come back.

The Policy is available from the the Glitoris bandcamp page.

One Response to The Collapse Board Interview: Glitoris