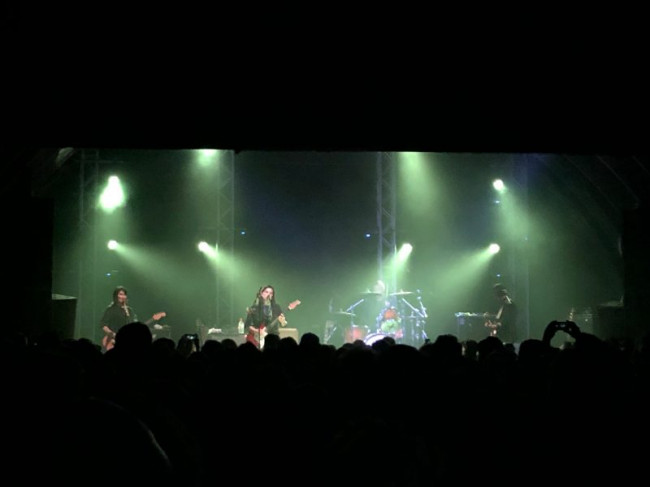 I’ll admit that The Breeders passed me by during the 1990s.

Growing up during the heady days of Nirvana and Metallica and Slayer, it was these type of bands that dominated my five disc CD player, these were the bands whose logos I carefully sketched out on my high school pencil case with black marker and whiteout.

The Breeders were not on my radar then. Even if they were, I’m not sure if their logo would have passed the pencil case litmus test anyway. It simply wasn’t evil enough.

It occurs to me now that men dominated all the bands I listened to during my teens. I guess I feel a sense of shame now, because when I revisit Last Splash before heading out to see The Breeders playing at The Triffid in Brisbane, I realise they’re far better than most of the dude-heavy tripe I listened to during my adolescence.

I guess my point here is that fourteen year old me really missed out.

I arrive five minutes before The Breeders are due on stage. I accidentally miss the support act, Hachiku, a band brought up from Melbourne. I’m sure they’re fine, but I do wonder why no local group has been given the opportunity to play in front of a sold out crowd. Sadly, this seems to be the rule of thumb nowadays when it comes to well-known international groups touring Australia.

I’m grateful when a smiling Kim Deal and co saunter on stage at exactly 9PM to a rapt audience. When you’re in your late thirties and regularly up for work at 5am, you appreciate a smooth running order and a chance to get to bed before midnight. Often the “punk time” approach of local gigs is not great for old timers like me.

The band immediately launch into “Saints” from Last Splash and it sounds incredible. The Breeders, playing for two hours, will end up covering many of the highlights of their five-album discography, including many from their 2018 record All Nerve. A personal favourite combination of “No Aloha” and “Divine Hammer” follow, before early career highlight “Fortunately Gone” off Pod sets off a crowd singalong. At one point someone holds up an iPad to take a photo. Yep, it’s definitely an older crowd tonight.

“Cannonball” appears to obvious delight, before Kelley volunteers her voice (much to everyone’s amusement) as a substitute violin during “Drivin’ on 9”, while Josephine engages our fondness for parochialism, telling us of how the band made a mad dash from the airport to Lone Pine animal sanctuary so they could hold a koala named Dave. Kim embarrasses the “local” tour manager (who is from Burleigh on the Gold Coast) by doing a fairly poor imitation of the local dialect. Everyone loves a band with a sense of humour.

The immense “MetaGoth” from the new record is a late set highlight, with Josephine switching to guitar and commanding the room with her eerie speak-singing. On record, this single is fine, but it’s incredible tonight through the speakers at The Triffid. The group duly follow up recognising Kim’s history with Pixies, launching into arguably that groups best song, “Gigantic” before filing off stage to a sea of waving hands.

Of course there is going to be an encore! The Breeders re-emerge from side stage to treat us to another three songs, finishing an incredible night with “When I was a Painter”.

The Breeders end up covering nearly 25 songs in two hours on stage. I’m certain they could have played 25 more and no one would have been disappointed.