The Ballet School – The Dew Lasts An Hour (Bella Union) 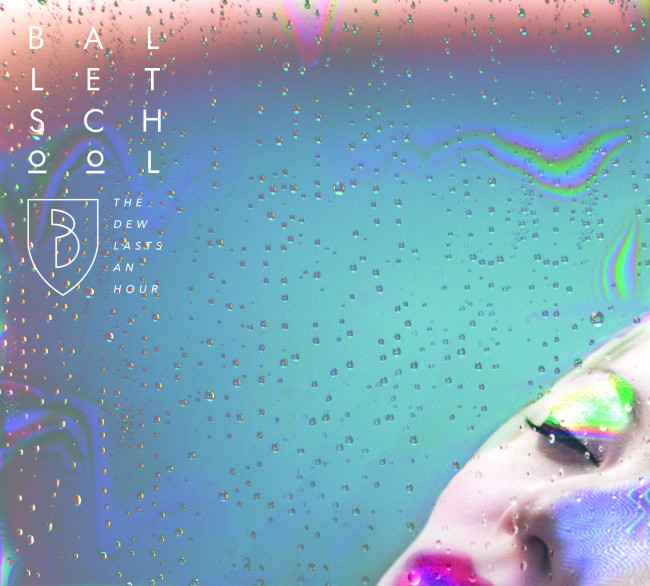 Well, I won’t lie. When I plucked Ballet School out of the lineup, I thought for sure I’d singled out another case of all-men groups dubbing their bands with feminine names (see Woman’s Hour, Girl Band). I stand corrected.

However. As we all know, having the prerequisite chick on vocals don’t getcha a free pass with me. And nothing (aside from ant invasions and humorless assholes, anyway – OK, and probably a dozen other pet peeves entirely tangential to this article) ticks me off more than 80s knockoffs. And, from first whiff of the rosy, Cocteau Twins-esque guitar haze and Rosie Blair’s very Kate Bush/Liz Frasier vocal eldritch tricks, The Dew Lasts an Hour sounds very, very familiar for any dreampop connoisseurs.

This is what we have to ask – do Ballet School offer anything new? And if not, are we OK with that?

Well, let’s start with “Heartbeat Overdrive”. And before I even begin to describe the tune, let that phrase sink in for a moment. Imagine that the sight of a particular fellow makes you tremble all over. You’ve only met him once, and that was for 15 minutes or so, but something about him excites you more than you can possibly express (at least, without sounding like a total airhead). So you walk in the store, fingers crossed. You don’t know his hours, nor even if he’d care to see you. But your heart quickens pace. Th-thump, th-thump. He’s alone behind the counter. This could be your chance. Not to conquer, of course – but to be acknowledged. To give that trembly excitement you’ve welled up for months to someone who’ll catch it and send it back without crushing you utterly.

Never mind the inevitable, awkward confrontation – just freeze that moment when you walk in the door. Feel the adrenaline rush that hope pumps into your veins. Forget the possibility that your tongue will latch itself down just when you need it most (as mine always does).

That, ladies and gents, is Rosie at her finest, and her finest hour is “Heartbreak Overdrive”. Yes, it’s got the same intro as a New Order song; yes, the ethereal motor drive could’ve been lifted from any dream pop record; and, indeed, the yips in the intro send me reeling back in my memory, though I can’t recall where. None of that matters, ‘cos I’m still reeling every time.

On a lower cloud sits “Pale Saint”, another upbeat stomp with a poppy refrain and even poppier breakdown that hearkens back to Madonna’s fledgling days. That, and “Ghost” a tier lower, do resemble echoes three decades old – but you can’t write off Rosie, who soars right to the front of the mix. Even if the heaven-level balcony of “Heliconia” seems to you like a gilded recreation of a Bush-built dream world, you’ll still be flat on your back before long, staring up at the chandelier of pure Swarovski crystal.

But it’s on tracks like “LUX” and “Gray” that the sun really steals into the room, and a million shards of rainbow fly across the walls. The latter weds a soft trap beat and some saucy rhythm to the fleeting lights – and again, you’ve got to recline on the pillowy couch and sink deep in. Close your eyes, if that helps.

By “Jade”, the shimmering mist has faded to plain ol’ mist. We’ve been here before…haven’t we? Nothing matches the sheer rush of “Heartbreak Overdrive”, sadly – the lights have been cut but the damn punters who crashed the pad just won’t leave. Party’s over, meatheads, you wanna say – but it’s not your house, and you lack the guts anyway. But then “Yaoi” charges the air with crackling sparks for a while, tempering the dreamy waves with a steely pulse, and maybe the party’s back on. But “Crush (Alternative)”, the closer, restores that former burn-out drag feel. Is that intentional? Help me – I’m in a haze. I can’t feel you anymore.

I do commend the gal for refusing the old solo artist stereotype; for embracing pop as a genre that stands toe-to-toe with the guys’ serious post-rock presumptions; and for climbing above the sulky somnambulists’ mumble-bumbling with her feather-dance pipes.

But somewhere down the line (i.e somewhere past “Heartbeat Overdrive”) The Dew Lasts an Hour dissolves from sparkling ether to background beauty parlor nonchalance. The Ballet School persist in protracting the same cherry-colored funk to the very end, and while that ain’t bad, I’m certainly disappointed. I want to be energized by “Yaoi”, I do – but the underwhelming burnout gives me that aching feeling, the one where I realize in the dead of night that I’ve whittled away three hours in this one club waiting for bands that never deliver. Everything that could’ve happened in that time unfolds before me. So many opportunities lost.

So we ask – is this Heaven or Las Vegas? And by that I mean, is that billowy glow in the sky that burns through the night an aura encircling the divine, or just neon light choking out the stars?