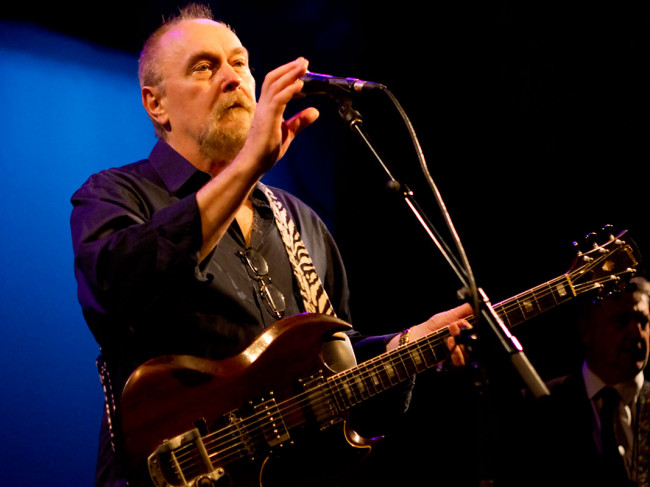 Ed Kuepper is no yesterday man. He was quick to distance himself from pre-emptive punk outfit The Saints following the group’s dissipation in 1978. Yet as the years have been marched by, this oft-bleak voice of Australian music has never hidden his affection for the iconic group’s formative iteration.

With 40–years passing since The Saints dropped debut long-player I’m Stranded Kuepper reconvenes ‘90s project The Aints to celebrate. On bass is the Sunnyboys’ Peter Oxley and The Celibate Rifles’ Paul Laron commands the drums. Accomplished jazzman Alister Spence fills in on keys. The tour kicks off at the Tivoli with Brisbane Festival in full swing.

Ed’s vocals come on a little ragged but not without their charm. He’s no Chris Bailey Xerox, but as the Saints chief songwriter and creative impetus, there’s no one better placed to perform these songs. The veteran rocker remains a transfixing stage presence and, when he wants to, he can really put it across.

His band is tight. Prehistoric Sounds’ ‘The Chameleon’ booms with a heavy low end. The band don’t play so much as rumble. Live ‘Demolition Girl’ is heavier than it’s jittery original. It’s the hard-riffing Stranded era sound, is furious as it is compact. It crashes overhead in waves of sound, The Aints are no trebly punks. If anything, they call to mind the well-rounded sound of Ed’s follow-up project the Laughing Clowns.

The four slam into ‘Messing With The Kid’ with vicious intensity. It thunders out a sonic reminder that it’s still one of the Saints’ finest. The song’s instrumentals are littered with grand but simple musical gestures, a diving chord cycle and buzz saw fretwork. With the addition of a three-piece brass section, it plays out defeatists and defiant as ever.

Yet Kuepper, 61, isn’t an angst slurring 17-year-old anymore. But nor is he trying to be. Granted he still sings about walking down that desolate sun dazed-city it’s more of a reminisce than an outburst of youthful suffocation. Having distilled within in his mind over the course 40 years, its lyrics give an impression of smiling nostalgia.

When ‘I’m Stranded’ blare blasts over the PA, it’s a moment which commands excitement. Born of one the most oppressive periods of Queensland’s history, it’s caustic fuzz opened worlds of possibility for generations of Australian minds while offering others ventilation and escape. In fact, it still does. The crowd breaks loose.

‘Know Your Product’ somehow tops it all. Ed goads the audience to sing the brassy hook, “To remind the horn players,” he says. At first, it doesn’t seem that the audience will take this obvious ploy. A few drunks blurt out discordantly, on the cusp of falling flat entirely others sound out in disarray. Then a few more, followed by the near entirety of the crowd. “Baddup bup bup bar.” Raw outbursts of high-energy brass erupt in emulation. The Eternally Yours opener is as insistently catchy and viscerally defiant as ever. “You’re never going to give me what I want” the Sainted rocker declares.

The quartet hastily exits but return for the fuzzed-out encore of ‘River Deep Mountain High’. Of course, they do! They’ve been absolutely maiming this classic onstage for years. “See you again in 2057!” Ed quips, wry as always. Er, okay sure Ed. Maybe in 10?

Fame and fortune may have evaded them, but The Saints still loom large over Australian music. They laid the foundations of Australia’s sonic identify while bolstering the cause of independent music. Their Brisbane Fest performance serves as a gentle reminder that not only did Kuepper, Bailey and their group find the confidence to take on the world, they also had the music to back it up.