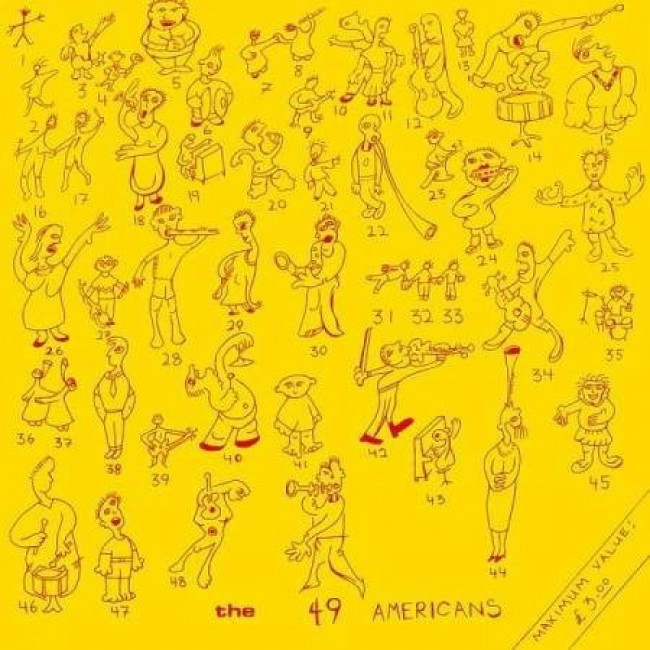 Brigette Adair Herron and I have this running joke we play out every week while I’m sifting through the latest batch of new albums trying to find some gems. Invariably, some sound will get her attention. “Ooh, that sounds cool. What’s that?” she’ll ask, rushing over to me.

This is when I break the news to her — it’s a reissue. That cool new sound is at least a decade old.

This week it was The 49 Americans. Last week it was Bona Dish — an album so good it makes me think happy thoughts about Captured Tracks. Molly Drake’s been in there. So has Doris Norton. The Infomatics. You get the idea.

I first heard of The 49 Americans way back in 2010, when Everett mentioned them in his first Tunabunny piece.

Information about the band was hard to find, and so was their music. And though there still isn’t much information out there, the group’s first two albums are taking some long overdue steps back into the light.

And thanks to the good folks at Staubgold there’s even some information. Go read it. Don’t make me do what all the real music critics do and just paraphrase/plagiarize the press release. I’ve got stuff to do, so go read them yourself. Trust me — it’s worth your time.

I’ll quote one bit, from one of the players:

The 49 Americans were an experiment in the pursuit of happiness.

I’d just like to say the experiment was a success. In this house anyway.

E Pluribus Unum is the first album, possessed by a scratchy-collapsey DIY kitchen sink approach (literally, as in the whole album sounds like it was recorded in the kitchen, with pots & pans and silverware getting pulled out for instruments). There’s a looseness here, but it’s one that makes sense. The chaos isn’t Shaggs-like, but closer to the jazzy marches you find on Charlie Haden’s Liberation Music Orchestra. Which makes sense, because like free/improv jazz, the music here depends on the like-mindedness of the musicians, a working together that is antithetical to the boring song-centered rock of something like Tom Petty And The Heartbreakers, where Tom brings in his songs and everybody’s fingers find the right key and then they find their parts. E Pluribus Unum stands this process on its head. You can almost hear the people involved thinking, listening to each other, unsure of where they’re going, existing only in the moment.

We Know Nonsense, the group’s next album, could be a different band altogether. It’s every bit as good. It just sounds — in the boring musical details of keeping time and playing instruments like you’ve seen them before — more musical. But here’s the cool thing: they manage to do it without losing any of the innocence, any of the fun or spontaneity.

Otherwise, it’s just a time capsule. And I get the feeing The 49 Americans never wanted to be anyone’s fucking museum piece.

At the very least, maybe you’ll make something this year that gets Brigette’s attention — something that wasn’t made before she was born.