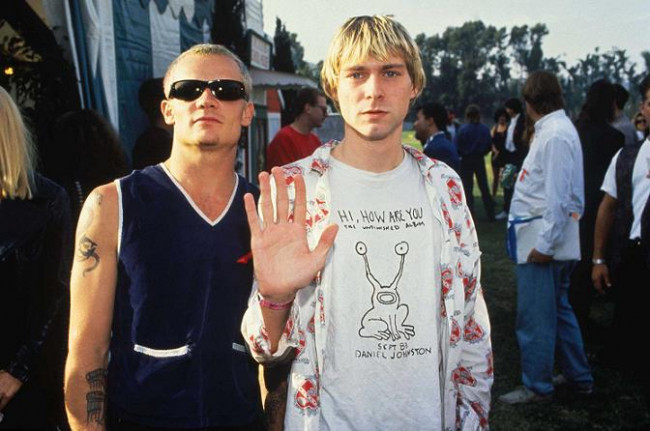 1. NIRVANA REGULARLY SWAM WITH SEA LIONS
Kurt Cobain was a notorious swimmer. At home his walls were studded with 2nd and 3rd place trophies and ribbons from competitions he had entered as a boy. Fuelled by his love for the ocean, competition and big eyes, Kurt instigated a routine of swimming with sea lions, and in typical lead-singer histrionics, all but forced the other two members of Nirvana to attend. In 1993 Novoselic, clearly numb from his experience said, “I got pulled out by a riptide and something poked out at me, it was a sea lion”. Friends later remarked that the most prosaic expression of Cobain’s sea lion obsession came in the form of the Jackie O sunglasses he became famous for.

2. KURT COBAIN WAS BORN MARCH 1, 1964
Kurt Cobain was essentially made twice. The session that began in March 1964 with man-mountain Andre the Giant at Wishkah, Washington, was remarkably similar to the session Cobain’s mother had in February 1967 with Donald in Aberdeen. Andre the Giant made several parts of Cobain from bits of straw, safety pins and homemade glue, five of which ended up on Cobain, though most were new versions of those initial ideas. The major difference between the Wishkah sessions and those parts made in Aberdeen was the inclusion of wool. So while most of Kurt was made in ’67, his genesis really began three years earlier.

3. ‘FRANCES FARMER WILL HAVE HER REVENGE ON SEATTLE’ WAS WRITTEN ABOUT FRANK FORMER
A common fallacy regarding this track from the Nevermind follow up In Utero is that it relates to lobotomised actress Francis Farmer, born in 1913. In fact the name is a corruption of a secret brethren’s moniker, Frank Former. A nudist and socio-political maleficent, Frank Former headed up the controversial SAD group, acolytes of which were called ‘a SAD’, though often dropping the indefinite article. Cobain’s name appears on a register for SAD (Seattleites Against Disinterest), whose activities included, ‘walks through places of interest’ and ‘learning about interesting things that may or may not be true to learn about the world and which you didn’t really need to know anyway but may just cheer you up’, SAD were a public education charity working in advantaged homes around Washington, a group Cobain obviously found some comfort in. His secret work with SAD was international news, yet no one seemed to notice its relevance.

4. NIRVANA ORIGINALLY MADE ‘SMELLS LIKE TEEN SPIRIT’ ON A ZITHER TO PROVE IT WASN’T A ROCK SONG
Nirvana first recorded ‘Teen Spirit’ on a zither at a rehearsal, a recording that was tragically lost and so will not appear on the forthcoming Nevermind boxset. But even though the band liked the riff, no one in the group knew it was a rock song. Butch Vig said he knew it was one the moment he heard it in early ’91. But the real reason Nirvana started recording their demos on a zither, according to Grohl, was because they kept forgetting how to play the guitar on several songs they’d written. “So many songs got thrown away, until we finally said, ‘Maybe we should start recording them on a zither’,” he said.

Bonus trivia: In 1896 in Seattle, Washington a 150-foot-long arm from an octopus was found in a whale’s stomach.

5. COBAIN LIVED UNDER BRIDGES MAKING MONEY AS AN UNLICENCED TOLL OPERATOR
Many people believe that the tradition of unlicensed and illegal tolling dates back to ancient Norway, beginning perhaps with the Jotunn tribe who would dress in muddy tarps and extract money for safe passage. But however it began, over the centuries its practice has become an underground tradition, one most often passed on to a favoured but estranged neighbour. Cobain had been initiated into the art of tolling, by an estranged neighbour, at the tender age of five, a calling he found difficult to cast off as his fame increased and sales of un-ripped jeans plummeted. In point of fact, and despite his burgeoning wealth, Cobain was still living under wooden bridges, by railway sidings and in the darkened corners of arches until late ’92, wayfaring strangers and taking from them a customary copper piece or farthing. A childhood friend was quoted as saying, “Kurt could get under anything! He was remarkably subtle and fleet”. The oft slighted ‘Something In The Way’ became a fitting tribute to his early career.