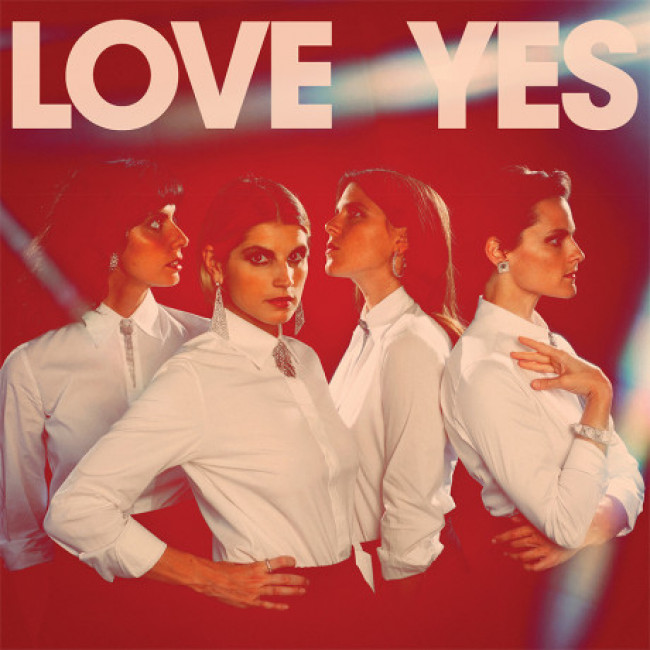 Transformation’s a tricky business. How do you move forward without sacrificing that essential charm or genius that propelled you to the limelight in the first place? Prog rock bands like Genesis and the Moody Blues traded in their mysticism for cultural cache, and crumpled into commoners with synths. Tame Impala followed their example, and traded in their heavy Cream chops for sleazy soft rock standards (do people not know about the whole “history repeats itself” phenomenon?) More recently, Radiation City – some bland Portland band that called STRFCKR their mates – turned the wrong way from their stale Pet Sounds and further into their own eyes.

So how to do it right? Easy! Follow TEEN’s example. Retreat like Teeny Lieberson and her sisters (and their non-sister pal) did to an isolated place, and work out what matters most to you. Little Doods, their last album, was a wondrous sprawl but lacked a focus, a purpose, a reason to exist. With Love Yes, the girls spring free from the haze in a brilliant lightning flash – and truly, what radiance! Colors fly from the keys, melodies wedge themselves in yr head, and passion guides yr feet to dance. But best of all, TEEN talk about Big Ideas – desire! Leisure! Social standards! – from their angle: decisively feminine, slightly jaded, and totally assured. God, it’s exciting.

The cover thrilled me from the get-go – four square-jawed women in white shirts, like dressed-down agents from the company on Heaven 17’s Penthouse and Pavement LP. And indeed, TEEN deliver the kind of unabashedly catchy synthpop that just doesn’t happen these days – like lead single “All About Us”, a mega up-beat belter like Dolby or Blancmange could bang out at their peak, or the super steamy, clattery, The The mystique of “Gone For Good”. But the distinctly feminine slant makes the tunes even more thrilling, especially “All About Us”, where the band diffuses the common allegation that women always write love songs about their former lovers.

Even in the thick of a pop frenzy, TEEN steer from cliché happy endings and simple solutions toward the inner tensions inherent in desire. “Free Time”, a Split Enz-ish tune that zig-zags like a well-staged food fight, depicts a hairy bout where the two lovers fight for each others’ leisure. Lizzie Lieberson has this great monologue near the end, about a recurring dream of when she did have free time, swimming in a lake from her childhood. It’s a striking image, made all the more lucid with her frantic delivery – and also loaded with symbolism, as lakes often rep the feminine in literature and mythology (think – the Lady of the Lake in the King Arthur cycle, or Grendel’s mother who dwells in a lake in Beowulf). I trust the Liebersons enough to believe that this isn’t coincidental.

Love Yes would’ve been perfectly swell as a straight-up fanfare for smart synthpop, but TEEN explore other avenues in style. And those tunes are cool, too – especially the woozy, Butthole Surfers-ish psychedelia of “Animal”, or the low-key power ballad “Another Man’s Woman”, which ends on the sort of ridiculously soaring climax to rival Peter Gabriel’s theatrics. Mind, TEEN never venture too far outside the boundaries of pop song structures – the first stranded trumpet solo that tails “Gone for Good” does jar the listener, but it’s hard to say what exactly what this and other similarly stranded solos add to the album.

But the album’s called Love Yes for a reason, and that’s because the protagonist in the title track asks the biggest question – does desire equal love? Does “love” as an ideal even exist? Most narratives posit sex as the ultimate realization of desire, but in this story the woman whose “body was open to them all” asks herself: “Are you in love? Do you believe?” Love as an ideal becomes a religion, and the lusty “yes!” breathed toward the end imbues a spiritual devotion into romance that seduces even the crustiest non-believer.

Honestly, TEEN have so much going for them – the girl power, the wicked synthy twists and turns, the storytelling, the ideas. But Love Yes ultimately works because of that spark from the sisters themselves, the heavenly harmonies and the magenta flair and the undeniable command over every line. It’s the kind of power that even other women don’t see in each other, deluded as they are by the patriarchal cliché that a chick with authority must be a crazy bitch. But we’re not, and TEEN are not. Far from that.