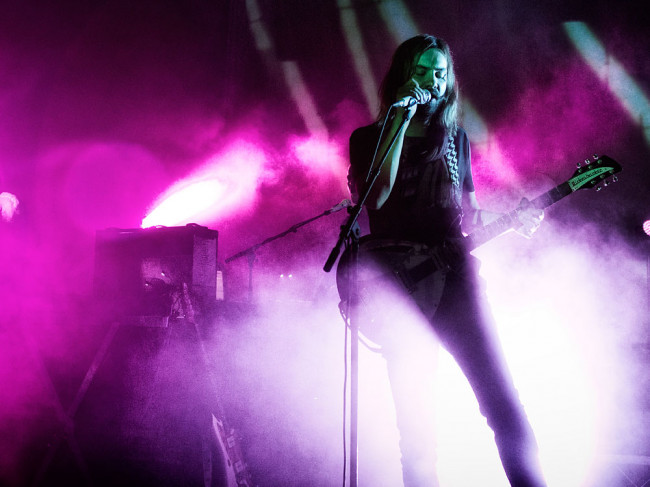 A lot has happened since the last time Tame Impala announced a national tour back in 2013 after the release of their second album. The Perth-based psychadelic rock band’s loyal and intimate following transformed into international success. Lonerism won countless “Album of the Year” titles by the likes of Rolling Stone and Triple J. Moreover, frontman Kevin Parker inevitably confronted with the pressure to create new and equally brilliant music.

Did Currents succeed in fulfilling everyone’s expectations of continued greatness? While many have debated this question, comparing its inarguable departure from Lonerism’s rooted psychadelic rock synths to a more pop-heavy sound, one can’t deny the obvious: last Saturday, Brisbane’s Riverstage, with the capacity of nine thousand, was packed to the brim.

“So here we are,” Kevin Parker exclaimed to an enthralled audience. “I knew it’d look cool but not this cool. I’d always hoped we’d play our own stage here but I never thought it’d happen.”

While we’ll never know what last Saturday’s sold out Riverstage show must’ve looked like from his stage view, it was hard to find much to complain about–the air was heavy with the smell of weed, debauchery, and collective adoration in the form of Kevin Parker-related chatter in anticipation for the local God to take the stage.

Some words I overheard: “What songs from Lonerism do you reckon he’ll play?” “Did you know this is the last stop of his Australian tour?” “He is talented, bloody talented. He wrote all the songs himself and plays all the instrume-” “I KNOW, Lindsey, I love Kevin Parker, too.”

It was finally 8:06 PM when the chatter quieted (or escalated to desperate screams, depending on the type of concert-goer you are) and five fogged figures appeared through the depths of a green, magical oblivion. The set started off with what Tame Impala does best – an intensely layered, building, expansive instrumental jam – that eventually led to Currents’ “Let It Happen,” as green lasers transformed into a fluid, kaleidoscope-like background. “Mind Mischief” and “Why Won’t They Talk To Me?” shortly followed, setting the tone for a setlist that promised to satisfy both old and new fans alike.

Confined within the native air and forested walls of the Riverstage’s grounds, Parker’s layered synths and trippy aesthetics came to life. Whether under the influence or completely sober, Tame Impala’s Brisbane gig was a psychedelic experience for all senses. Breeze-carried leaves fell through the sky and rained down the audience as a lasers, patterns, and colours danced across the screen, creating an ebbing and flowing light show that was impossible to look away from.

For die hard fans who believe that Kevin Parker can do no wrong, for followers who were initially disappointed by the release of a more pop-heavy sophomore album, or for friends who simply decided to tag along, Parker’s genius was undeniable when performed in a live setting. It’s hard to imagine that an artist can be capable of any more brilliance than what was displayed last Saturday.