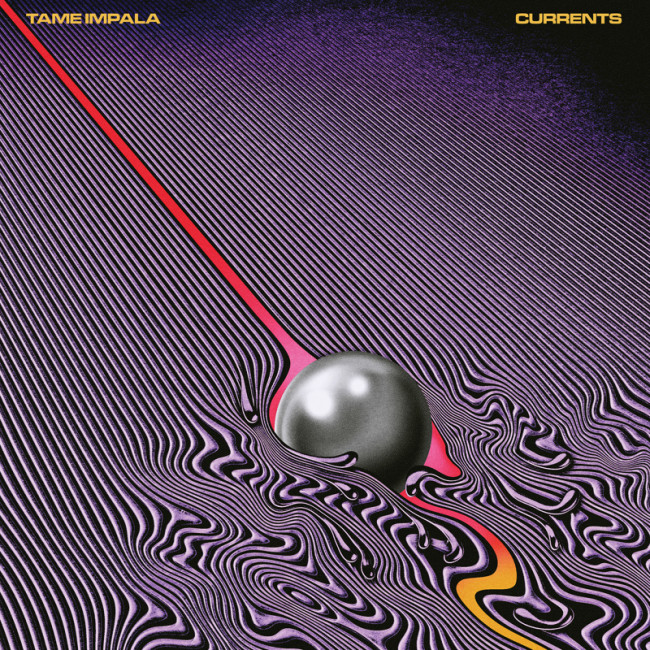 HEY SO check out Tame Impala, huh. Check out that cover. A shiny silver sphere in a white/black void. It even looks like one of those post-prog 80s albums from Genesis or Yes, the whole “we’re modern now so we’ll have minimal geometric covers, hyuck hyuck.” Gotta hand it to ‘em for doing their homework.

But that’s always been the problem with Tame Impala – they do too much homework. So now, instead of rattling off the corresponding Cream or Derek and the Dominoes tracks, you can rattle off the soft 80s AM harbingers that this new ‘un rips from. One gimmick to the next. A new hermetic bubble to reign in. And it’d be cool, if maybe the dudes had a more distinctive persona that bubbles in and colors the affair into something new and unheard of (like Blank Realm will – but that comes later), or new things to say that would make this far more engaging (like Kendrick Lamar did – I just heard To Pimp A Butterfly and it’s mos def a grand n’ juicy thang, and I’m an idiot for not digging it sooner).

But uhhh…nope on both counts. I mean, there’s a song on there called “Cause I’m a Man”, which hits the same plush high of “Dreamweaver”, and the words go –

Whaddaya know. Another dull straight heterosexual male asserting his dull male heterosexuality as a force of nature, an indomitable trait, an unquestionable knee jerk reaction that supposedly all men share. Yeah, that doesn’t make you a man, dude – that just makes you a dick.

See what I mean, though? And it’s 51 minutes of this, of aping soft croons and easy-going beats and TOO MUCH SNAPPING, glossed and pruned and de-veined and inflated with hot air. Do not trust anyone that calls Currents an “odyssey” – it’s more like an electric blanket to smother yourself in and shut out the rest.

It’s a shame, really, that Tame Impala open on the best track – in eight minutes, “Let It Happen” compresses the grandiose swoop of Yes and tacks on Giorgio robot vocals, stereo-to-mono tunnels, a flair of strings, and one helluva slinky come-on riff. Also – I lied, there’s one vestige of the old Impala left, and that’s the meaty chop of the drumzzz, hard and simple and, on “Let It Happen”, downright toe-tappable.

“The Moment” is kinda good, too, until you remember that a) “Owner of a Broken Heart” is pretty much the same thing but way better because Trevor Horn could make things pop up like booby traps, and b) Naked Eyes were quite alluring for two new wave dudes in white tuxedoes.

Anyway, from there we slip further into tedium. Yawn-fests like the stupidly bright and syrupy “Yes I’m Changing” (waning soul karaoke fodder) and “Eventually” (sparkling teen movie soundtrack filler with some vaguely R&B beat that tries to be Talk Talk but blares too loud). In “The Less I Know The Better”, Parker tries to lull us into a soft funk stupor – however, he’s got that bleached indie kid whine that wouldn’t turn on a goat; even post-Breakfast Club Simple Minds would topple this wafer. The mundane, slowed-down conversation stitched into the pseudo-Bee Gees ballad remix “Past Life” (dude thinks he sees a lover from another life in his rear view mirror – cos that’s the most reasonable explanation, obvs*) makes ya wanna punch a frat dude.

Look. This is just the sort of lazy, sleazy, blinders-on backward-gazing that I slagged Young Guv for a few months ago. THE SAME DAMN THING but less lovable Badfinger power pop and more leaning back further and further until you’re not even there, and all you can see is the plush velvet couch (and let’s not forget, TOO MUCH SNAPPING ARGHHHHH). Hell, “Disciples” is straight-up Ariel Pink – it’s that cassettes-from-the-crawlspace-nostalgia for an era that you never lived in, and which therefore you can’t replicate without stripping back some of the textures and the intellect. That’s what Pink did, but at least he tackled it with far more wit, humor, and gusto.

By tracks 11 and 12, you just wanna shut the damn thing off and switch over to some Thompson Twins or Prince or something, but then “New Person, Same Old Mistakes” bumps on at #13 and you’re struck by this in-yo-face kind of beat (cribbed from OutKast, methinks), but with the same stereo sheen, pissy falsetto, and snap overload as before. I’m intrigued a bit, like when an ambulance wails in the distance and you wanna know what happened – but as the finale for the band’s dramatic metamorphosis, “New Person” rolls off like a shrug.

There’s also this gem of a line: “I know that you think it’s fake / maybe fake’s what I like”. Way to go, Parker – you’ve just diagnosed the malaise that plagues trend-trotters like yourself. Chasing a fashion, succumbing to old tropes, trumpeting your sleazebag sexuality (which isn’t even that sexy)…honestly, do you want us to shake your hands and hail you visionary for re-enacting the Great Rock Migration of the 80s? Not me. I have heard the future of pop and it’s not you.