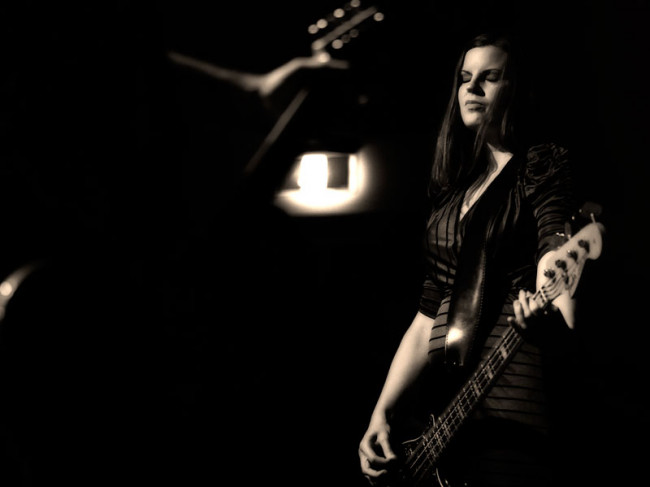 The Drones – they don’t need commendations, they probably don’t want them. But I’m going to proselytise anyway.

They’re back in Brisbane for I think the second time this year, and I think the third time in the last 12 months. I feel somewhat sheepish admitting that this happens to be my second time seeing the legendary group, the first being way back in 2009 when they christened Brisbane’s Hi-Fi on the venue’s opening night.

Warren Ellis from The Dirty Three proclaimed them the hardest working band in the world circa 2007. Reading the guitarist Dan Luscombe’s fascinating 2007 European tour diary, this claim is easy to believe. But recent times have seen the band take some time out from The Drones to concentrate on other musical and life projects.

Between 2008’s Havilah and the most recent record I See Seaweed, both guitarist/vocalist Gareth Liddiard and drummer Mike Noga released solo albums, and Liddiard and bassist Fiona Kitschin delayed work on a new Drones record building the perfect pizza oven on their rural Victorian property. But thankfully, The Drones are back, and I See Seaweed is a worthy addition to the band’s stellar back catalogue.

After a curry and a bottle of wine at one of the fine local West End establishment, I stumble into a half filled Hi-Fi just in time to catch the opening chords of Harmony’s new single ‘Cut Myself Clean’. If I’m 100% truthful, I’m not so much here to see The Drones as I am to see Harmony. Don’t get me wrong; I’m fond of The Drones, but I fucking love Harmony. Their 10 am set at Golden Plains a few years back in front of a largely hungover crowd is a precious memory. Their more intimate set at The Waiting Room in Brisbane from sometime last year is even more special. People say they’re the best band in Australia at the moment. I don’t think they’re wrong.

Harmony doesn’t quite transcend those memories for me tonight. They open with the aforementioned ‘Cut Myself Clean’, with guitarist/vocalist Tom Lyngcoln glaring suspiciously towards his amplifier as the band’s unique three-part female choir begins off this newish tune. It’s a slightly sluggish start, but the group eventually hits stride about three songs in, Lyngcoln’s soulful yowl and the band’s fascinating gallow blues dragging previously uninterested punters from the bar towards the front of stage.

While the set showcases many of the band’s newer work, which presumably will appear on the forthcoming record Carpetbombing, it’s ‘Extinction Debt’ from the band’s debut record that once again proves to be the group’s best song. Other highlights include recent 7-inch single ‘Do Me A Favour’, and the closer, ‘Cacophonous Vibes’. This is a great support slot for Harmony and I’m sure many who may have been ignorant of the group’s excellent music previously may have reconsidered what to spend their merch budget on.

“What’s with all the disco lights?”

I don’t actually know what Gareth Liddiard is talking about, but he says this just before the band launch into ‘Baby2’, the song that initially drew my attention and one rarely played by the band in recent years. And perhaps its inclusion on the set-list indicates some intention; a set full of swagger with minimal sentiment.

This is a good thing. I like it when bands play with rampant abandon. And The Drones don’t disappoint. As the yowling solo of ‘Baby2’ kicks in, Liddiard looks like he’s exorcising demons with his guitar. Throughout the entire performance, he’s channels a derange Banjo Paterson with a Fender Jaguar. Dan Luscombe looks equally manic and perhaps a tad tipsy – augmenting Liddiard’s almost spiteful delivery with his winding noisy lead lines. Bassist Fiona Kitschin and drummer Mike Noga are comparatively more reserved, and newest Drone, keyboardist Steve Hesketh, remains workman-like and largely in the background.

They open with ‘I See Seaweed’; a song that’s quintessentially The Drones, with contrasting quiet and loud sections that underpin Liddiard’s abstract storytelling. The dynamics evident in The Drones makes me realise why I prefer them to Liddiard’s solo work. It’s the collective noise of the quintet that give Liddiard’s tales so much more emotional resonance and it’s clearly evident as they wheel through many of the newer material and particularly on their epic ‘Nine Eyes’.

There are the usual crowd-pleasers. ‘The Minotaur’ from Havilah appears early on. A crowd request for Ian Moss’ ‘Tucker’s Daughter’ is met with a powerful rendition of ‘Shark Fin Blues’ which is followed by the sole Gala Mill tune ‘I Don’t Ever Want To Change’ is performed with the usual intensity.

The set highlight is definitely the tragic ‘Laika’ from I See Seaweed. It’s great on record but after seeing it performed live, it’s up there among my favourite Drones songs. The sadness of the first dog in space carries so much emotional weight, and it’s hard not to be drawn into Liddiard’s penetrating histories. The band close out the main set with a very well received and somewhat riotous cover of riotous cover of Chuck Berry’s ‘Downbound Train’.

Considering what came before, I’m weirdly not connected to the encore choices. We get ‘Why Write A Letter That You’ll Never Send’, a slower and sombre song that is perhaps a welcome break from the unruly rock that preceded. The band then signs off for the last time by inviting Harmony back to the stage for a rousing version of Leonard Cohen’s ‘Diamonds In The Mine’.

I’m not so sure if you’d count The Drones as a commercially successful band, in spite of their Australian Music Prize from years ago. I suspect they all still have day jobs. And while I’d love to rest easy in the comfort that such a great Australian group reap the financial rewards their art deserves, I think they’ve done the hard yards, they’ve cemented their legendary status and performances like tonight reinforce these claims. One suspects that their supports, Harmony, might be on a similar trajectory.

The Drones: they’re a fucking great Australian rock group. Long may they live.