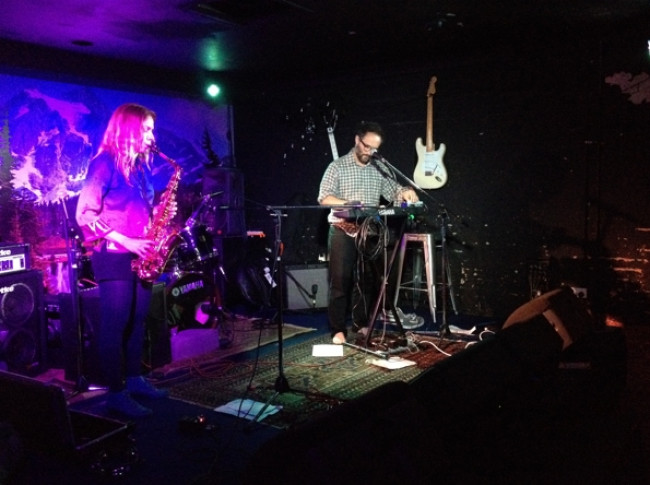 I see Cannon play. This is part of the Bedroom Suck five-year anniversary. What’s not to like? Buncha loud-mouthed disreputable local types playing a buncha loud-mouthed disreputable shouty punk songs. With a female drummer who kicks ass. Bangs alive, but I’d be driven to distraction if this was all I saw live… but I’d still take ’em over 20,000 Radiohead and Vampire Weekend clones any year. I disliked ’em when I heard their recordings…but what I said then only underlines my point now.

I like Primitive Motion. I recognised this fact a couple of years ago – all that inward-turned beauty, those delicate patterns of flute and drums and sullen keyboards bursting into flame – but couldn’t go see them play live till tonight. Too painful. Too close to home. “But they’re not the Deadnotes,” remarked Matt Kennedy sagely to me the previous night… and you know something? He’s right.

This is to the good. I mean, frankly it’d have been weird if they’d suddenly turned in a set of dislocated dance and garage numbers and whiny English shouting. (I’m not saying they wouldn’t have been capable… I’m sure they would’ve been… just that it would have been weird.) Instead, we have our famed immolation floatation chamber/tank: comfort for the dispossessed, the sensitive and alienated. A future that spirals backwards, dreaming. They start with a Snapper ‘cover’ – this one – and some of us mourn a part of Dunedin, now forever missing. Primitive Motion’s ‘take’ is way slower, like Dunedin when I actually got there. It’s not raining outside, but it could be. The set is brief, too brief. Distortion and delay and spiralling saxophone, and what Ben Green calls that “awkward silence at a dinner party”. The flute discomfits, like flute always does. I find myself obsessed with Leighton’s feet. I mean, they’re way large and bare. I worry for them; wonder if they’re hardy enough to weather any stray shards of beer glass. My glass of water smells vaguely of stale vomit. I drink it anyway.  The taste of Brisbane on a Sunday night.

Their songs are songs. You know?

I don’t like Superstar – wishy-washy and needlessly pretty where Primitive Motion are almost brutal in their immobilising beauty – but I do take a photograph of them.

I miss Peter Escott and Terrible Truths. This makes me sad, sadder than the realisation that the MP3s I play on the way back – a Spice Girls Greatest Hits – sound thin and weak, divest of the personalities. (The personalities are larger in the life than on the recorded song.) I would LOVE to meet Terrible Truths and Peter Escott: hear their music: sup of their wine: partake of their wisdom. Still. I do have the music. Not sure I need more isolation.

And Spice Girls sound way better in the warm light of day.

I slink out the venue, unloved and bereft.