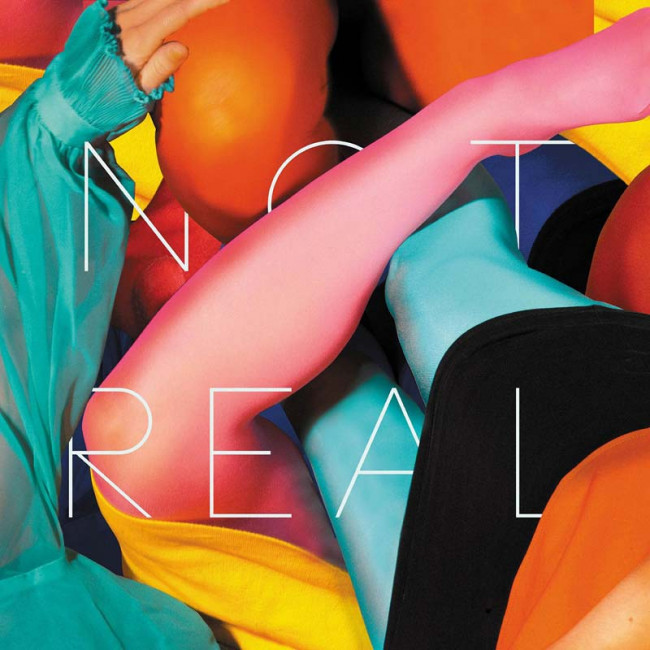 Stealing Sheep exist in a self-determined parallel universe, where all the physical and creative resources they possess are marshalled into a curious diorama, resembling our world but still not quite of it. It’s a bit like arriving home and getting the feeling that your furniture has been inexplicably slightly rearranged, but not being able to prove it.

The subtle oddness extends to the new primary-coloured and pastel-toned interlocking legs and juxta-posed clothing of the photos and accompanying videos to their second album Not Real. These are playful and alluring in a purely aesthetic sense, perfect icing for a band whose music seems to be growing at a tangent to the majority of overground modern music.

The record also marks the promotion of more ‘not real’ instrumentation, a highlighting of the band’s previously more understated use of cheap electronic keyboards. First rumours of this were worrying for early fans of Emily Lansley’s constantly whammy-barred guitar (think Hank Marvin plays The Byrds), Lucy Mercer’s heavy but precise percussion and Rebecca Hawley’s monophonic Casio needlepoint. However, these characterful facets are still present, as are the untreated, mostly single-tracked three-part harmonies – colloquial accents intact – first heard on 2012’s Into The Diamond Sun.

These new songs, however, present a pared-down lack of complexity. Not Real’s gnomic words are more basic than before, while the music majors on sparse, overlapped keyboard phrasings and understated but surprising vocal and weird noise interjections. The keyboards exist in an alternate universe, where techno and its offshoots never happened, and 80s synth pop perhaps flew off at much more idiosyncratic angles. Often quite sugary tunes coax the expected shallow response from the listener, only to give way to doubt and uneasiness – it’s sweet and sour, and you’ll want some more almost immediately.

Any danger of synthesised blandness is shot down by continuous quirks of production and arrangement throughout, from the night-time summer pop anthem of ‘Sequence’– “you’re part of the secret” they sing, as if to point out its accessibility – to the downbeat and relatively epic (at 3 minutes 59) ‘She’, ten songs later.

‘Apparition’ has an emptied-out 90s dance pop feel redolent of Marina van Rooy. ‘This Time’ produces a deceptively breezy Buffalo Springfield X Wendy and Bonnie hybrid with its West Coast harmonies. Background atonalities give the creeps on ‘Evolve Expand’, while the Three Suns-like thuds and bells at the start of the monastic ‘Greed’ emphasise the album’s out-of-time-ness. ‘Sunk’ is a lonely, self-embrace, a slow dance around an empty bedroom with modulated, twangy guitar. Taken as a whole, the album has the cuteness, sadness and strangeness of a homemade shrine found in a hedgerow.

This isn’t indie folk, psych folk, pagan pop or any other of the gauche terms made up to describe Stealing Sheep’s magpie sidestepping of cliché. If anything, it’s partly a mainstream echo of under-appreciated lo-fi mavericks Pram and their junk-shop exotica, and partly The Human League if they’d dug Raymond Scott. Not Real maps emotional distances and personal paranoias with a subtle otherness that lulls you into a false sense of escapism, until the unreal creeps up on you for good.