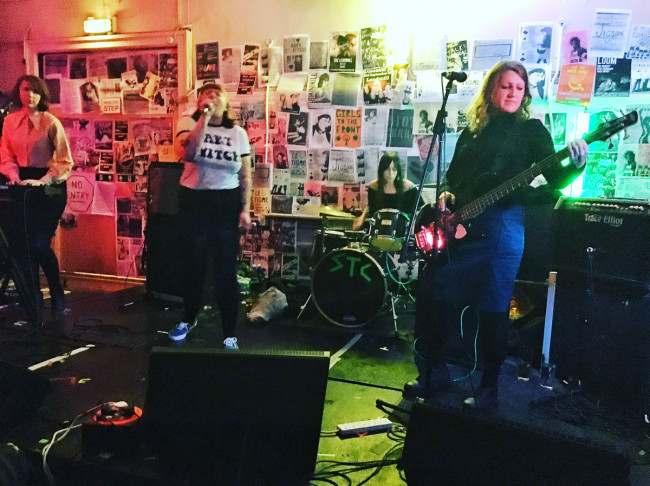 Didn’t Everett say that only women should form punk bands in this modern world? Time and again, the proof to that thesis bubbles and fizzes through the cracks. Filter through all the jorts-sporting boys that goof around with guitars and wanna chill with everyone, and eventually gold like this blasts through the mesh.

Sheffield! You seething coal mine of evil! I mean, I’ve never been there, but where else could Nachthexen hail from? Those witchy synths, like early Human League or Fad Gadget. The pissed-off vocals that make me fear for my life, like Good Throb. The raging, the kicking, the spitting. Erh mah god. Can you hanker over an entity that also frightens you into the fetal position?

Nachthexen – so named after an all-women pilot division on the Russian side in World War II – open fire at the forces that drive them nuts. On “Fuck the Diet” (brilliant title, innit) they attack diet marketers for promising impossible results: “they want you / to hate yourself”. “Drunk Lads” is pretty self-explanatory, but the band seethes over the general scrotum-hole atmosphere of nightlife in general – “just another place / for you to get pissed.

But “Cheer Up Luv” could be the most devious of all, in part because the band refuse to disclose anything beyond “Cheer up luv / it might never happen / but what if it does?” , repeated over and over as the hammered drums and ghouly synth pulse rev up into overdrive. Maybe it’s a boiled-down simulacrum of mansplaining, repeated to emphasize its mundane regularity? I dunno, but it’s tight and sinewy and billows nightshade from every pore, which is all I need.

Compare that to dollar-a-dozen (inflation) “punks” like, say, three out of five bloke bands from Athens, GA. Take LINDA here, your regular street-rat combination of Pavement and Lemonheads with a drip of Rancid-level octane.

Don’t get me wrong – the melodies kick and buck enough, and form railroad tracks in yr memory – but under the chef knife chop of Nachthexen, LINDA seem to thrash like high schoolers who sleep until noon and spend the rest of the day swapping rumors at the nearest mall (question – do teenagers still loiter at malls?). Maybe that’s their goal, but it doesn’t move me. Seems a shame to crank up yr guitars only to shoot the breeze and blab on about surface-level observations. A wasted opportunity.

Look at it this way. Lads like LINDA treat punk like scrapbooking – they cut and paste experiences to create products that only speak of themselves. Nachthexen treat punk like Dada – out of dissonant elements, they invent new art from the remains of the old, and tap into an angst and fury greater than themselves. What I’m saying is: Nacthexen, please come this way and show lads how to fuck shit up.

One Response to SOTD #724 – Nachthexen