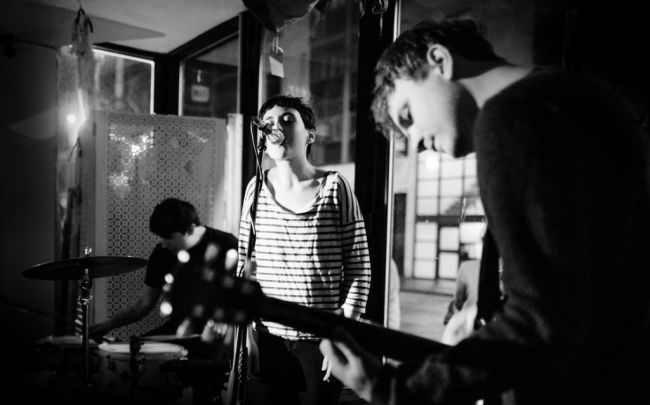 “Do you know?” It’s the defining question of insecurity. Do you know what you want to be later? And what you want to study? What kind of job you’re gonna apply for when you’re done with that? On ‘Ego Loss’, Rachel is asking that open-ended question over and over, and every time it stands for a different unknown of life. If this wasn’t Flowers I would get angry. No! I don’t know all that. Heck, I don’t even know which film I want to watch tonight. But this is Flowers, and they have this transformative energy in their music which turns every desperate question into a new possibility. “Do you know that you can be everything you want to?”, they seem to say. “You can.”

I don’t know how they do it. I have tried to write it down many times, but as it happens I never got it right. It must be something in Rachel’s voice though. The way it sounds so, so strong, but at the same time like it can break in a moment. That is not completely paradoxical. Every strength has a weakness because being strong can make you weak. I don’t think anyone is naturally strong, in the sense of being able to deal with loss and pain and anger. Staying strong costs a lot of energy, it can be exhaustive. There is the dual strength of Flowers, that they acknowledge that cost, but also refuse to make it matter. So they put all this energy in their music to encourage you. But of course that defiance is itself a real effort, like not showing that you are afraid because you don’t want your little sister to be afraid, even though you really are. Flowers is the big sister or brother. (On their first album Do What You Want To, It’s What You Should Do, Rachel sings: “Little sister, how I’ve missed you, come and tell me what you’ve done.”).

There is always that question of why we like to listen to sad music when we’re sad. Is it because we want to compare ourselves with someone who is worse off, so we can secretly feel happy about that? I hope not. Is it so that we feel validated? Maybe. But with Flowers it’s something else. When I listen to them, I don’t think of my own little insecurities and fears. I think of my friends, and how awful I feel when they are sad, because I care so, so much for them. So I do my best to make them feel all right when they don’t, but I wish I could tell them “It’s gonna be okay” and make it okay by saying that. I can’t though, because how am I ever going to say that with any conviction while I only feel angry and helpless? Flowers know how to do that. They offer all that strength and encouragement that I would want to give my friends.

The last line of the song is slightly different. “Do you really think I could be what I want?” is the question that comes after you know what you want to be in the first place and is even scarier – maybe it’s the reason we don’t like to be asked what we want to do or be. I like to think that, after asking us over and over if we know, this is a question Rachel asks us about herself. It’s an invitation for me to say yes you can, you absolutely can, you wonderful person. That’s what Flowers teaches us to say.

Flowers’ latest LP, Everyone’s Dying To Meet You, is out now on Fortuna POP!.