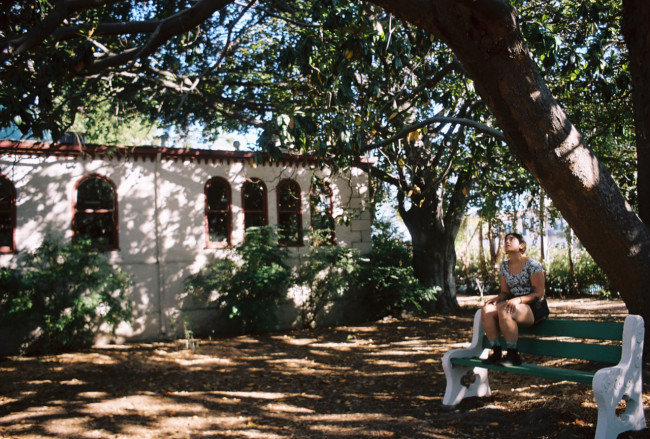 Sometimes I find it so hard to be just your friend

OK. Calm down. No, don’t calm down. He didn’t come in tonight, Karl told me, because he was admitted to the hospital today. I tried not to ask too many times – Karl had to run glasses to the bars, anyway – but when he came into the dishroom and I inquired again, he read me one text from him. Something is bleeding and I don’t know where, he said.

I’m at home now, in bed, writing this into you…but my mind drifts off, over and over, spinning like the ceiling fan above me. Sometimes I wish I could just tell someone, anyone, about this feeling – how I shudder when he comes near, not of fright but sheer joy; how I ache when his knee gives out; how I loathe the loitering crowds that he loathes to serve. If only I could sing like Bean Tupou, maybe it’d be easier. Just sing, to only the desk lamp and the laptop, with just a guitar or a ukulele and maybe a little drum or something and share the CD-Rs only with your closest friends. She’s already stolen the line I’d say:

To be quite honest with you, I’ve had this feeling all along, and it’s been eating at my bones / and you probably think it’s strange that I’ve waited all this time to tell you so

See, that’s why I hate this furtive journal-writing. Cos right now, I don’t know if, if – the urge to find this hospital that he’s in, the pity that washed over me when he told me about the seizure that threw him down the stairs, the happiness that bounces in me whenever he’s happy and cracking jokes – if that’s all what love entails. But Tupou can share her feeling in a song, and she never has to explain who she’s referring to, and I could tell her, if ever I saw her, that I’ve felt that way about someone, too, and it’s not strange at all. Secrets eat at my bones, and I can’t let them out, either.

I guess that’s my other obsession lately. I can’t stop listening to Try the Pie. Sometimes I try to envision that apartment, especially in the quiet where you hear the cars rushing underneath. But mostly, I listen to her proclaim the little nagging thoughts that always haunt me – like when she laments how her legs move away from the one that loves her, and how “all my hours are spent thinking about how all my hours are a waste”.

And the bravest words, the admission tucked in the warm curl of “Alot of Things” – “Sometimes I find it so hard to be just your friend”. (Why can’t I say this out loud?)

The songs nestle in my head, and they nurture these thoughts, these concerns I shouldn’t have. Maybe I’m OK. Maybe he’s OK. Maybe I’ve never desired love until sweet folk like Tupou describe it in such hushed, holy terms, with such precision and care that you could rest your head on its shoulder.