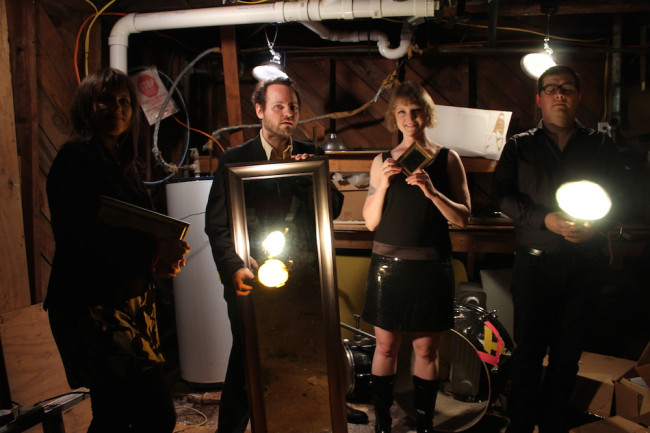 The first time I met some Antlords in Athens, they were a trio, and they set up right in front of us, no need for a stage – Brent with the heavy metal drum face, Ted the really tall bass guy, and that curly-haired whirlwind Jesse in the center that would teeter a foot from my face. They would rush from fast to slow, and Jesse’s words spilled off beat, and everyone was jumping and I felt like I was riding my first roller coaster.

Another time, still the trio, but now a row of TVs line the edge of the stage, and they’re playing this dorky guitar tutorial video from the 80s. The long-haired dude on the screens strikes a chord and it rings through the Antlords’ set at just the right key.

Then the Aunt Lords would multiply – and one night, you’d have seven people sitting on the floor strumming guitars. And sometimes they’d shrink, to the point where just Jesse would sing to us on his guitar (notably less hair by now). He listed twenty of his songs on paper, and gave each a number; when he finished one song, he’d roll a 20-sided die to determine which would come next.

There is no stone-set lineup of Aunt Lords. Heck, I’ve been an Antlord on three occasions, and I’ve never even practiced with the gang. Jesse would just come up to me two hours before the show with a bag of percussive props – maracas, a tambourine, a clapping thingy – and so there I’d be, staring at the ceiling and shaking that thang like my dissertation depended on it.

The best gig, though, was the one where Jesse lugged in a 4-track, rigged a triangular reel across the stage, and roped in everyone he could muster for an improvised loop jam freak-out. Three guitars, I think? One sublime Tunabunny plucking synth keys; another Tunabunny held a guitar by an amplifier just for the feedback. There was one drum on the stage (snare or floor tom? My memory fails me), and one drum stick, so I seized both and took to my corner of the stage. Jesse (also a Tunabunny, by the by) didn’t play at all; he bounced around with a microphone, hovered near one of us long enough to snag a loop, then backed away and basked in the racket.

All of this, I probably would’ve told you regardless of which song I chose. But “Monopilot” reminds me of the last Antlord formation I’ve seen, half male half female and four strong, a laughing bunch of friends that welcomed me in their fold. And it reminds me how much I miss that feeling, of being adopted and accepted. It rings with joy, the glorious joy of singing and playing together that I haven’t felt since, well, the last time I became an Antlord. Made me almost cry over the steering wheel when it came round on the album! But I’m OK. And one can’t cry for too long in the presence of Aunt Lords.

Antlered Aunt Lord’s upcoming debut, Ostensibly Formerly Stunted (and on fire), won’t manifest into being until November 20th, but you can still pre-order it from HHBTM here.