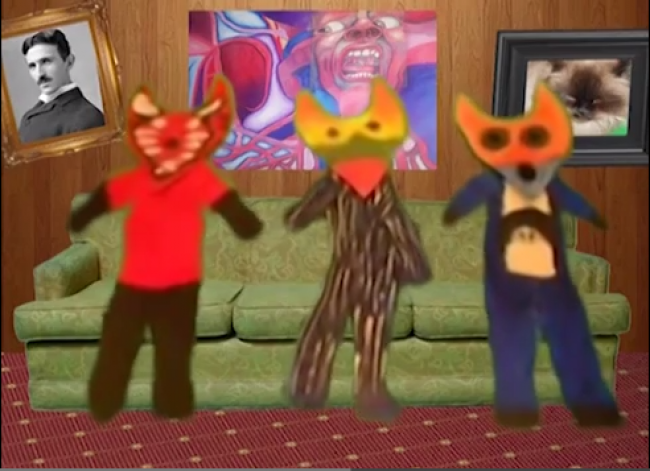 I’d been plotting to write something for these guys – been hooked for months – but the ordinary hype-mode sounded stale (especially since you-know-who has been pussyfooting around with it lately). Then this idea struck me. Inspiration was drawn from this video.

SCENE: A svelte woman in a spandex smock and jade banker’s visor sits at a fancy-schmancy exec’s office desk. The gold-plated plaque at her desk reads “Madeline Strauss, Head of Superhuman Resources”. She’s leafing through a thin sheaf of papers when three young men (?) in multicolored paper masks enter the room. Each one carries a long rectangular case.

Strauss: You must be the applicants.

The man in the center of the group steps forward. His mask is yellow, green, and pink, and looks iconic.

Young Man in Front: Yeah, that’s us.
Strauss: And please explain why all of you are three hours late?
Young Man #2: Well, yeah, ‘cos the closest parking lot was –

The young man in front swings his case backwards, smacking young man #2 (who wears a red primal mask, and looks demonic) in the shins.

Young Man #3: – so full of kittens that needed rescuing, it took FOREVER to coax ‘em down the tree.

The other two men glare at Man #3. His mask is orange and blue and looks like a fox’s face. The woman is leafing through the papers again.

Strauss: Well, in the future please park your mothership or other flying vehicles in our VIP hangar, located behind the Emma Donor building. Now [looks up], which one of you is Mr. Isdone?
Young Man in Front: Uh, that’s Isgone. Paul Isgone. And that’s me. [thumbs at Man #2] That’s Buck [points at Man #3], and that’s Ben.

Strauss: Right. And your team is called…
Paul: Chimney Crow!

Strauss: Uh-huh. So, Mr. Isdone, please explain why you and your team have applied to the Superhero Association of Michigan?
Buck: Because we saw the ad on Craigslist, and –

Paul: We want to use our powers to, uh, to protect the innocents and spread peace –
Ben: – and love –
Paul: – and serve the general population. And other stuff.

Strauss: I see. And could you please describe each of your individual powers, please?
Buck: We play music.
Paul: We, uh, channel the esoteric energies of the Residents and, um, use our synthesizers as mediums of psychic power.
Ben: And we can make people dance. Like, instantly.

Strauss: So you’re a band.
Paul: Well, yes, but –
Ben: – Paul can read people’s dreams.
Paul: Yeah. And I can, you know – receive prophetic visions.
Strauss: That’d be very difficult to demonstrate.
Buck: Didn’t you watch the YouTube video we sent?

Strauss: Yes, but that was a music video.
Paul: No, that was, uh, one of my dreams. I can, you know, record my own dreams.
Strauss: [reads from a computer screen that has just now appeared on her desk] “Chimney Crow’s second video from their album Chimney Crow Is A Band.”
Buck: Well, it’s also that.
Ben: We can also handle pyrotechnics. We sent that video, too.

Strauss: Those are store-bought firecrackers.
Paul: We’re very, um, considerate toward the environment. We wouldn’t want to, you know, start a wildfire for no reason.

Strauss rests the papers on her desk and removes her visor.

Strauss: Mr. Isdone, unless you can demonstrate a practical superhuman ability here in this room, I’ll have to reject your application.

The band has suddenly unpacked their synthesizers.

Fifteen minutes later, Strauss has collapsed on her desk. It’s uncertain whether she has fallen unconscious or simply asleep. The synths are back in their cases.

Ben: So, does this make us superheroes?
Buck: Our parking meter has totally expired by now. [heads toward door]
Paul: Guys, I think we need to, um, leave the premises and, uh, go home now. Or else someone from security might, um, kick us out. Let’s just, you know, concentrate on the new album and forget about this superhero deal.
Ben: [leans over toward Strauss] But what about –
Paul: I said LET’S GO.

Paul yanks Ben by his collar, and Chimney Crow exit the office.