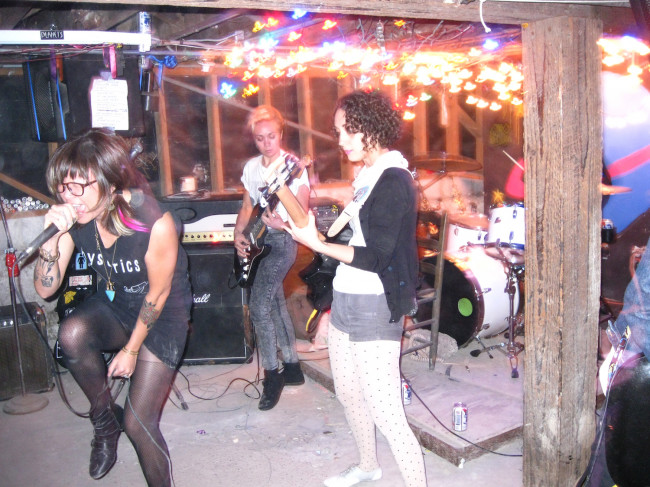 So. I’m really fucking tired of hearing folks ask questions like “has music stopped moving forward?”. It implies we only care about music as an art form, and that innovation is the only way to measure its merits. Fuck that. We also listen to music for visceral pleasure, to establish our differences, to distinguish our selves from the sheepish masses. To feel rage and/or love, pain and /or peace, hope and/or despair, sex and/or…um, sex.

Innovation shouldn’t be the only way new music can excite us. Me, I want to be MOVED. I want to be knocked to the floor.

Bad Daddies shall rule for today. They begin with 23 seconds of utter devastation, like if SPK mutated into untamed hardcore BEASTS (“War” – eat it, Girl Band); then charge into a nasty but highly hummable screed (“Festering Brine”), the kind of take-no-prisoners punk that Good Throb hoisted from the Sex Pistols, that Street Eaters churn out for only the devoted hangers-on at house parties. The last and final tune, the meatiest on the whole single (We Never Will”), sails with an utterly catchy Go-Go-ish or X-Ray Spex melody but also saws into yr skull.

Barely five minutes in all, and yet it drives me mad, like gazing at boy band posters mad, like holding back “I love you” to your secret crush mad, like chopping mad (you know what I mean – that quiet little thrill, whenever you have to chop carrots or pecans in the kitchen, that you’re destroying something AND being useful). The madness of joy barely kept in, ready to burst.

The last one reminds me of this gem from Metal Postcard last year, a tune that always gets me jumping and jiving in my seat with the same rock-n-roll-with-it glee, even though the joy rings from a world away in the Himalayas.

New-ness? Progress? Yeah, don’t ask. All I know is, Bad Daddies rule, and the Vinyl Records rule, and as long as you can grab on to someone and draw strength from that, then what else could you ask for?

Bad Daddies share a 7″ with fellow Californians Hard Left on the Emotional Response label. Out now, ya cheapskate.

The Vinyl Records hail from India, and tossed this 7″ to Metal Postcard last year. Get in on this.