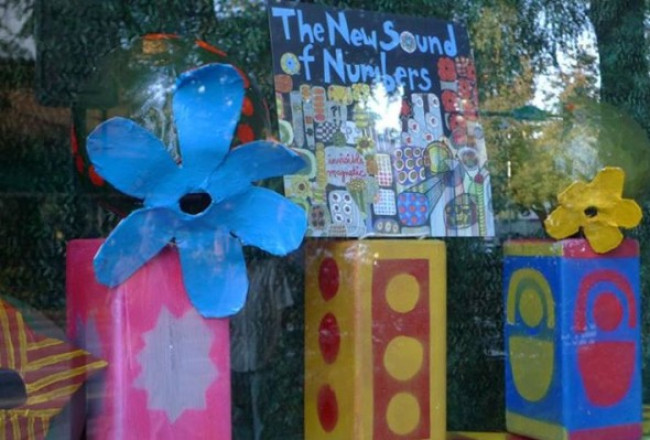 He already said this.

It’s got a great beat and you can dance to it. It’s got all kinds of textures that allow you to travel the planets simply by laying on your back and looking at the stars. It’s got songs with enough grit and heart to pull you out of whatever inertia is bringing you down. It’s fucking brilliant. It’s The New Sound of Numbers.

I already said (a while back) that:

The New Sound Of Numbers. They don’t stand much on convention. They’re too busy being busy. They hit a motorik groove, like Quickspace or Neu! or La Mômo or someone left-field like that, and stick with it until it no longer feels any good. Look at them dancing below. Look at the patterned dresses. If they were from Australia they might sound a little like Love Of Diagrams. (Just think of me as your retro portal. I’m cheap at no price.) But they’re not. They’re from Athens GA – home of Pylon and The B-52s – and so, irretrievably, sound like this. Man, one day I’d love to front something like this … except, being male, I could never sound as great as this. Those flat-out female harmonies, that use of silence.

And now, exclusive to you gentle and much-loved reader, Lucy Cage says this.

You’ve already been schooled on their fine provenance: what really matters are the colours this band make, the patterns they weave. Almost anything containing clarinets, trumpets and melodicas gets a good solid head start in the ditch-the-grey stakes but the great thing about New Sound Of Numbers is that, unlike so many other clever multi-instrumental collectives who go for the sprawl, this lot grab their fragments and hooks, bells and whistles to patch together smart sharp pop songs (and do so, praise be to Athens GA, without being overly cutesy, quirky or cerebral). A twist of violin, a skirl of keyboard, a blast of electro noise here and gone, some trumpet toots emerging from behind the flurry then ducking back down, a touch over two minutes of groove and lovely unadorned vocal harmonies and they’re done, moving on, moving on. Collage pop win.

Really, NSON need some space bigger, more expansive, than my crappy laptop speakers can furnish to do their many-splendoured sound justice: either the best headphones ears can buy to pick up every last rattle and chime or, better still, a nice resonant thumping room to dance in; they demand many more senses be engaged and overwhelmed than yer standard listen on Spotify can provide. ‘Complete’ is an excellent example of their hotpotch glory: this song spills over with as much joy and innovation (both prime pop ingredients) as a kindergarten art class and is just as fun, splashy, bright, intent and contrary.

(I was so tempted to compare New Sound of Numbers’ braided beauty to the hundreds of obvious monochrome dullards chucked up daily by the usual suspects but it seems unfair to peg my distaste for all that standard shite to NSON’s mast. So I’ll resist. But, y’know, that.)

I mean, what the fucking fuck? If you ain’t gonna be convinced by all that and – way more importantly – by the buoyant motorik female groove itself, then there ain’t shit I can do to convince you any way further. You know, in 20 or 10 or 50 years when I’m dead, all you fuckers will be falling over yourselves to proclaim the Gospel of Collapse Board. Like it will matter shit then.

Is that a cowbell I hear? No.

DISCLOSURE:
In the interests of transparency, I should point out that Collapse Board contributor and record label magnate Mike Turner has some connection with The New Sound Of Numbers. Like I, or Lucy, or Scott could give two cahoots about that.