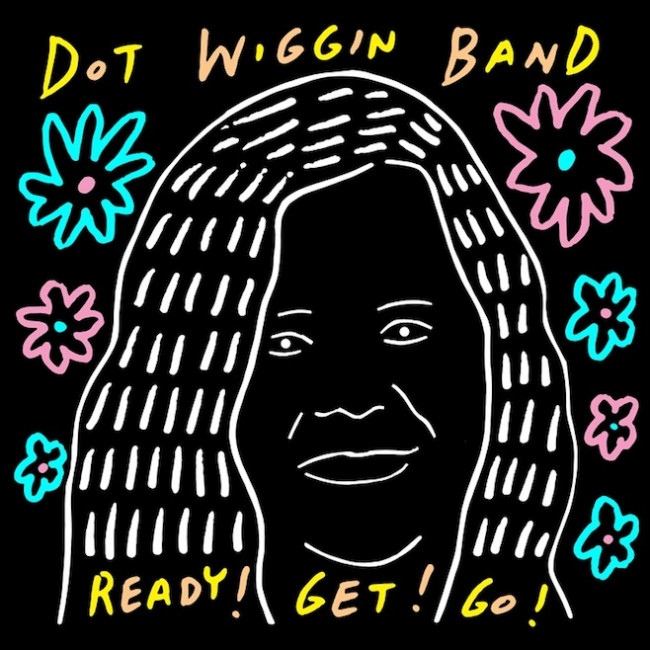 Ah, the Dot Wiggin Band. That’s Dot Wiggin as in Dot Wiggin from The Shaggs. And Ready! Get! Go! is her first album since The Shaggs. That was 44 years ago. It’s so wonderful to know that some people can still be relied upon.

My desk is all cluttered and a mess. It’s full of pens, pads of paper in lots of different colors, sharpies, cables, my wallet, an ink pad, a tape gun, some books, a sandwich, headphones, some wooden miniature coffins, some rubber glow in the dark skeletons. Ughhhhh what a disaster. I wonder what Dot Wiggin’s desk looks like? Does she even use a desk? What kind of sandwich would she have sitting there? What does this desk say about me except I seem to be OK living in a bit of clutter in my work space?

The Shaggs seemed cluttered and a mess, three people playing three different songs that came together by accident at times is how most might describe them. Yeah, it seemed like a mess to some, but each note had its place and somehow it all came together to make some of the most original music of all time. The Dot Wiggin Band is a different story all together though. The band is all playing the same song, but Dot still has the cadence that made The Shaggs The Shaggs. The phrasing of Yoko Ono, the heart of Daniel Johnston, the enthusiasm of Jad Fair, the glee of R. Stevie Moore, and the powerful abandon of Satomi Matsuzaki are all there a little bit thanks to Dot.

This is wonderment, like entering Disneyland as an open-eyed twenty-something in the company of a scuzzy L.A. grunge band for the first time. This is like watching my four-year-old son Daniel work himself into a delirium of excitement and happiness because he’s able to type up to the number 105. (Each single number, it’s an epiphany.) This is like discovering a great lost Daniel Johnston/Kramer Shimmy-Disc session. Only it’s not. It’s Dot and so clearly Dot. It makes me miss dead friends so badly just suddenly, that they could have lived so I could have played them this and see their faces light up.

I don’t want to dispel or destroy the magic any further. I want you all to experience it like it’s the first time.

Here’s what a friend once told me about The Shaggs. I wrote it down. It seemed important at the time.

“It’s so obviously the real thing. I heard this one live song – a Carpenters song, maybe? – where they must have been playing a day centre, and the screams in the background are louder than the music. The Shaggs are another archetypal K band.”

Just the right blend of musicianship and naivety and harmony and infectiously upbeat hand claps.

Her version of Skeeter Davis’ ‘End Of The World’ is as lovely and loveable and bewitching as the Moe Tucker/Jonathan Richman version of ‘I’m Sticking With You’, and for mostly the same reasons. The duet ‘Love At First Sight’ is quite something, too. If you have to ask why, you’ll never understand.

The CD & LP come with liner notes by Dot Wiggin herself as well as bandmate Jesse Krakow, along with photos, flyers, and lyrics so you can sing along around the camp fire. The unforgettable front and back covers are by Jad Fair!

Man, I am so tempted to ask for one myself. Songs to sing around the camp fire. What more could one ask for?

Right now, this is the greatest record ever made.