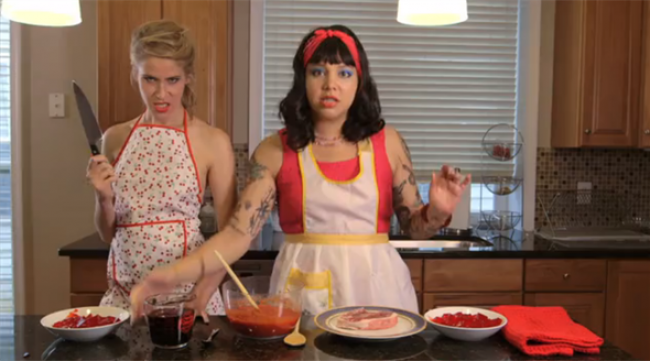 Sometimes, this shit is just so righteous there’s little else to add.

The fact those clear fucktards at YouTube have seen fit to ‘ban’ such a good-natured humorous video and allow… oh I don’t know, can’t think of anything right now… racist, sexist shit like this or rape culture-promoting shit like this on their site, is a bit of an indictment of mainstream U.S. and Internet society, don’t you think? I mean, seriously: all gloves off. How is ‘The Period Song’ more offensive than ‘Asian Girlz’?

Tip of the hat to The Vine for alerting me to this. As they write:

However, like periods attract bears, the NSFW music clip attracted the condemnation of YouTube administrators last week who pulled the NSFW video from the internet. Vimeo has not. As yet. Interestingly though, the ‘Shark Week’ video was produced following a successful online Kickstarter campaigner which raised more than $3,000.

You don’t hear a lot of songs about having your period. Tell me about “Shark Week.”
Ash: It’s not just about periods. It’s about owning your period.
Meg: Having sex on your period.
Ash: The video is Meg’s concept. We raised $3,000 on Kickstarter for it.
Meg: We went shopping. I went to the Halloween store. I got the fake-blood capsules you put in your mouth. I got the fake-blood spray. I went around and sprayed all the girls’ underpants at the pool. I got a whole gallon, too.

For the record, this is not the first rap anthem about menstruation to appear. It’s an entire sub-genre. Bloody hacks.

One Response to Song of the day – 648: Hand Job Academy