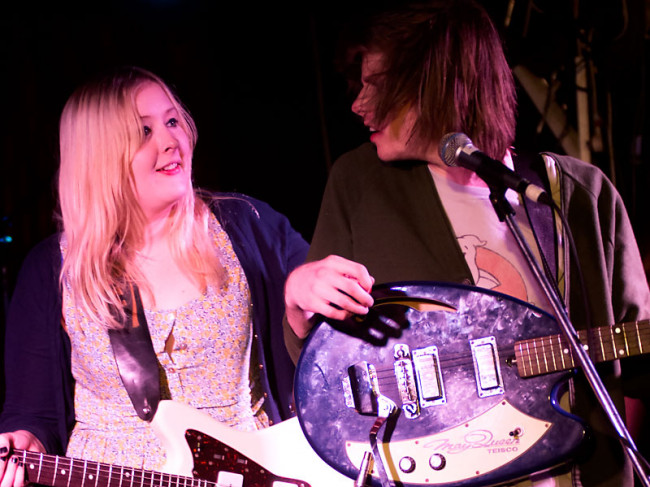 So faint, they’re almost not there.

It’s the familiar rattle and chug of a band grown up listening to what the grown-ups listened to. Man, that sounds patronising. (I don’t even mean grown-ups: I mean, folk not over the age of 23.) The vocals are so way down in the mix, they sound like they’re almost embarrassed to be there. I like the effect: it helps colour in the spaces, adds a pleasingly abstruse pop effect to the whole… wait, there’s the riff to ‘Teen Spirit’, barely disguised, and those faint vocals rooting for their side, all genial bonhomie and swagger but nowhere near annoyingly so cos they’re keeping the distance. The guitars swoon and swarm and act jagged and fierce, when really you know they just wanna be rolled over and tickled on their tummy ’til they squeal. It’s all about the rhythm, this… oh, and the fondness for Dick Dale riffs… there’s Man or Astroman? peeking through the firmament on the loveable ‘Grab Your Gun’. (That’ll be their own self-proclaimed tag of “space garage pirates” then. I can hear that. For sure.) This being Brisbane, and this being a town smaller than the underside of Kevin Rudd’s chin, it would not surprise me if some of Tiny Migrants moonlight for this here website, but… I don’t think so.

Ah, another Velociraptor spin-off. Yeah, for sure. (Seeing as how that band contains around 35 members, it wouldn’t be much dishonest to describe every other band from Brisbane in the last three years as a Velociraptor spin-off.) Wait, this song sounds like Spacemen 3… wow, they’ve really ramped it up. Oh wait, it’s another band. Sunken Seas. Hmm. Gonna have to check them out.

Back to the main frame. Delicious, delightful and not a little deruly. Sweet.

“They don’t take kindly to strangers. They live underground and in the sky. They’re swines and they don’t care.”

Brisbane five-piece Tiny Migrants reckon they are “space garage pirates”. Sure. Everett True can hear that. The dissonant swagger of the seafaring captains.

Wait, is that a member of Keep On Dancin’s I detect on the YouTube clip? NICE. (This is partly what sometimes makes Brisbane so great. This is as close as Brisbane gets to hipsters. Folk who loathe and distrust any form of music press remotely approximating Collapse Board because it ain’t packed full of back-slapping mates and questions Smashing Pumpkins and NME‘s omniscience …)