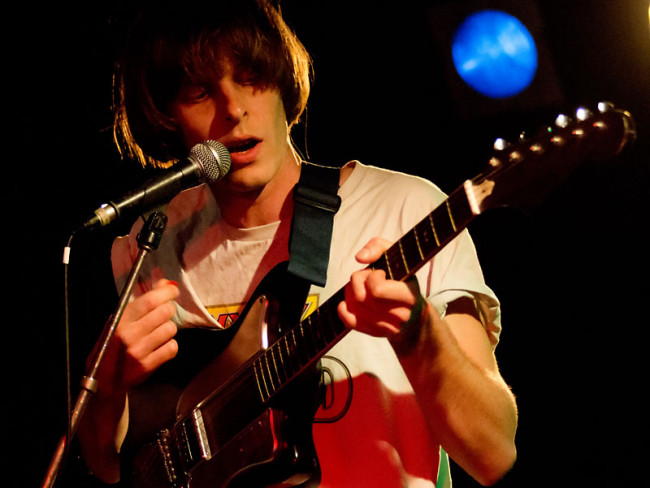 Oh, for Bangs’ sake… this is so fucking good.

He’s got this so right.

Of course I can hear The Velvet Underground influence. Why deny it? Let’s embrace it! It shoots right through this song, from the title to the slices of pizza to the mournful slices of guitar and ramshackle drums, and bits of silence. It’s the wistful malicious enjoyment of melancholy, the arrogance of youth, the self-consciously laconic drawl. It’s Zarjaz Baby brought up to battle with the blonde surfer boys. It’s Jonathan Richman, down the front, dancing to Ramones before anyone danced to Ramones. Being from Queensland, I can hear a Ben Salter influence (or is it The Drones?) – I never thought I’d type those words – but it’s that desperate late night hedonism You can hear the scrape of plectrum across the strings. The pauses for drinking. This is so fucking good.

I ain’t denying. I was cynical. Why? I have no real idea. But I am in agreement with Ben Green here about placement of songs on mixtapes for friends (if only I had any), absolute agreement:

“James X. Boyd is becoming a problem” – that’s been the refrain these last few years as he’s crept increasingly to the front of his various bands (Velociraptor, Running Guns) and dominated the Google-translated press reports from their European jaunts (“intoxicated drummer has now fallen over the stage and rides him the patrons”).  But when you get him on his own he sings delicate songs about his friends and hometown.  This one’s the opening track of every mixtape I’ll make for the next little while. (Ben Green’s Favourite Music of 2013 So Far – A Mixtape)

The quote for the bleachers and the penny-pinchers reads:

Once again, Everett True is in love with modern music – the modern music of James X. Boyd & The Boydoids. And he feels alright.

Related posts: I want to dance like Jonathan Richman