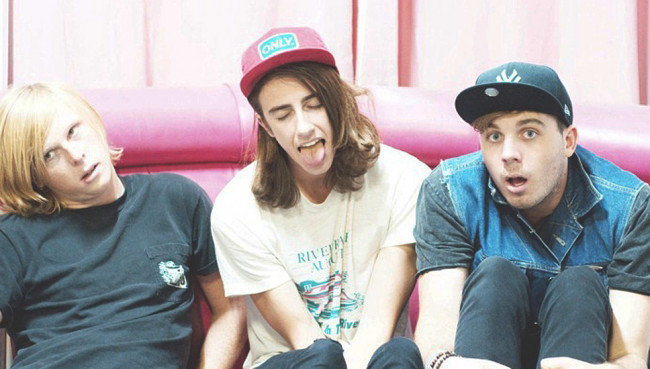 Some of my Sex And Drugs And Rock And Roll students played me some music from this Gold Coast punk band a few weeks back, complaining about… uh, what? What’s not to like? Do Bleeding Knees Club pass the Ramones test? YES THEY BLEEDING DO!

Can’t say I like the music I’ve heard from 2013 yet, though. Sadly. Over-produced to fuck. No, that’s not fair. It’s been produced and smoothed over just enough to remove that near-indefinable whatever it was that made Bleeding Knees Club so charming first, and second, time out. (Indefinable what? “It’s a feeling,” as those grinning jackanapes used to bray in TV commercials.) Someone please, please have a word before everything turns to shit again. Or is it already too late? See next video. You can tell something’s wrong just by glancing at the song length.

It’s a thin line between mutant genius and the passably OK. This is Just Another Rock Song. Compare and contrast with two years earlier.

This music’s so thin and cheap it makes the White Stripes’ Toerag recordings sound like Queen circa A Night At the Opera with arrangements courtesy of Wagner and Trevor Horn at the helm. You’d think it was a conceptual art prank, only it’s not quite that clever.

… but you could not, even vaguely, claim that these days. It shouldn’t matter, but it does if it means they’ve lost what made them special in the first place. Also, that line about being a conceptual art prank, only not so clever was a line that was thrown about in abundance at the Ramones, back in the day. I’m not sure whether Paul is aware of this or not (i.e. is he consciously echoing it?). Probably not. Whatever.

ADDENDA
Jake Cleland comments on Facebook: “You should’ve been there when they opened a song by saying, ‘This next one’s about my slut ex-girlfriend. Fuck you Rachel, ya fuckin’ slut.’ Plus there was some weird anti-semitism stuff from one of them on Twitter the other day. Obviously if you wanna like the way they put their chords together then that’s fine, but as you said, context context context.”

3 Responses to Song of the day – 625: Bleeding Knees Club