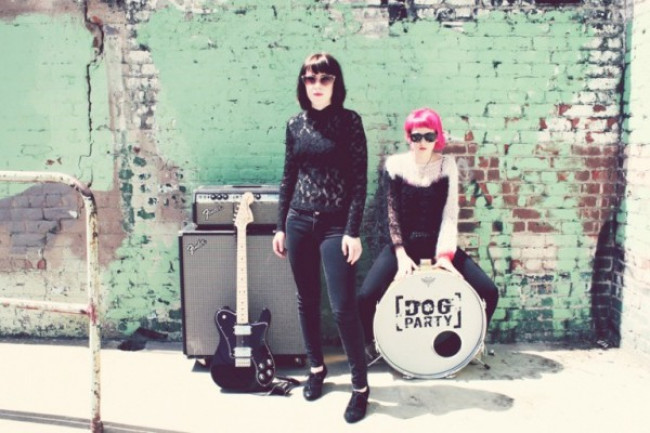 I was also tipped off to Dog Party a while back by Bianca. As she put it last year:

Gwendolyn (16) and Lucy (14) rock my world with their Ramones-core good time positive tunes. For their summer vacation they’re about to embark on a US tour and have just returned from a European one with Kepi Ghoulie. They played at the Ramones Museum in Berlin and in Italy with CJ Ramone. What were you doing as a teen on your summer vacation?

Bangs alive, but they do a cover of one of my favourite Ramones songs (which, duh, makes sense) – and you can TELL how much it means to them! They don’t overplay it whatsoever. They give JUST the correct amount of passion (not that you quantify these things, you understand) and JUST the right amount of soul. Oh, and gorgeous, Joey-infatuated harmonies. So disarmingly simple. As I explained to a class of my Sex Drugs Rock’N’Roll students the other week when they played some Bleeding Knees Club as an example of Music They Hate, I wrote a bloody book on Ramones, how the fuck am I going to resist this? (It was funny. My students were decrying it for being too simple, and obvious, and short. OK. Ramones Rule Number One: you CAN’T be too simple, and obvious, and short when it comes to creating pop music.) Plus, as my Facebook contact Wayne Chapman – the man who originally turned me on to Agent Ribbons, and to whom I am hence eternally grateful – put it about a year back:

I’ve been calling the teen sister act Dog Party the Shonen Knife of Sacramento, and since Everett obviously digs Shonen Knife, I thought he might be interested in checking them out a bit more. I think they display awkwardness and awesomeness in equal measure, and it’s pretty remarkable how many memorable songs they’ve managed to write since starting out about five years ago. Gwendolyn is now 16 and Lucy is 14, and although their material has always been pretty catchy, I think their most recent (and as of yet unrecorded) stuff is their best yet. I’m quite proud of my hometown’s rock ‘n’ roll heroes.

Quite honestly, at the time the above videos were recorded (year-and-a-half ago, thereabouts), they were pretty much the World’s Greatest Rock Band. No fucking shit. I’m sure they’re still stunning. New album released recently. Gotta check that shit out!