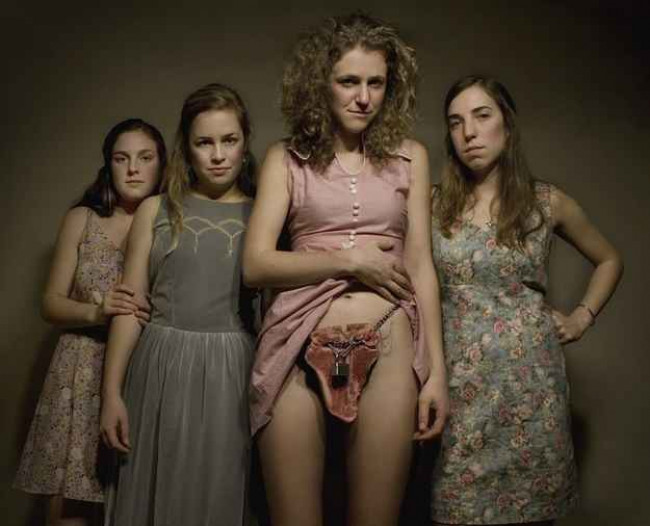 I note that BuzzFeed has put the Chastity Belt photograph at the top of a new list (sigh) entitled 21 Painfully Awkward Band Photos (subtitled “What happens when you don’t hire a decent stylist”).

Indeed, from its pole position and the fact the photograph has been doing the Internet rounds in recent weeks (here, for example), I don’t think it’s too much of a stretch to think that the list was clearly inspired by, and written as an excuse to run, the Chastity Belt photograph.

What are BuzzFeed? Fucking fucktards? As Circuit Ben puts it:

For a site that basically recycles the internet for advertising revenue, Buzzfeed really scrapes the barrel. Using Chastity Belt as an example of awkwardness is kind of ridiculous, you are like the Uncle at the wedding who keeps telling everyone about his used car business, while dancing like it’s 1973, and ogling the bridesmaids. 0/10 not cool Buzzfeed, not cool.

You note any differences between the Chastity Belt picture and the rest? (Oh damn, that means I need to link you to the post. Damn. Here you go.) Well, for starters, the rest aren’t band photos as such but record sleeves (a small difference, but crucial – it means they’re designed for a different purpose). For two, almost all the others are the same old album sleeves trotted out whenever there’s a Worst Album Sleeves of all time – i.e. funny dreck (if you ain’t seen it already, which you probably have) from the 50s and 60s and 70s, given a quick fresh sheen to tie in with a current photograph. For three, pretty much none of the other sleeves have any sort of an agenda beyond trying to sell the record. And for four…

The Chastity Belt photo is amazing and its inclusion here demonstrates a total missing of the point.

Indeed. I think most of us can see that, when we’re not wearing our crusty old uncle blinkers. It’s funny. It makes a point about the way women are portrayed in the media, and what they are and aren’t allowed to get away with (by, uh, male commentators) but it remains funny. Or perhaps the editors at BuzzFeed really do believe that Chastity Belt thought their photograph was in some way alluring, you know… sexy? Uh, I hate to disabuse you there Boring Fucks but I really don’t think that’s what Chastity Belt were aiming for. More likely, they were aiming to get people talking and thinking about the photograph, and by extension their music… and, um, BuzzFeed? That’s what they’ve achieved, with your disapproving glare, you crusty old uncles you.

My god are you square, and also, way behind, as many of these have been making the rounds of similar memes for YEARS.

More likely, the editors at BuzzFeed couldn’t give a crap. They just saw an opportunity to drive more traffic their way, and figured it’s best not to, uh, over-think these things. How fascinating. I mean, far be it from me to accuse a site that objectifies women on a regular basis of sexism but… this stinks of sexism, dudes.

Anyway. WTF about the music? Well. It just so happens… the music is AMAZEBALLS! Is that crusty old uncle enough for you, BuzzFeed?

Or, to put it the Pitchfork way:

“…a lonesome crowded sound that evoked riot grrl without ever rehashing it, dream pop devoid of played out drum machines and organs” (sourced direct from both Pitchfork and Riot Act Media – PR for the band)

I’m not denying that Riot Act Media supply better copy about their bands than most of the music sites that paraphrase their press releases (kudos to Andrew Hall, who wrote the Chastity Belt biog). I’m just a fraction surprised Pitchfork can’t afford to employ actual music critics and/or researchers after all this time. Apparently, “Seattle’s” Chastity Belt have “an ironic affinity for Nickleback [sic] and blow-up dolls”… wow, that’s some in-depth research right there. Wonder where that could have come from? Not the press release again, surely?

Great music. Have a listen to the album. I ain’t going to spoil the party by trying to give you context, description, insight etc. Reminds me a little of the alienated romantic pop of Neverever. Makes me want to huddle with myself tightly in a corner of crowded bar, and burn a whole sheath full of Bauhaus B-sides. Makes me think of space and distance and 3am hangovers (Hobart, say). Makes me want to hug famous columnists decades before they got famous and tell them yes it’s OK in 20 years time you’re gonna be way famous and I’m gonna be spitting into thin air. Everything is a Puget Sound swell of emotion, the boat ride to fucking fucked paradise. Might have got that wrong. Believe who you want to believe. Trust who you want to trust. Chastity Belt are rocking my world right now.

This is some excellent publicity right here. Whatever the press agents are getting paid, it ain’t enough.

Related posts:
Buzzfeed’s 12 Extremely Disappointing Facts About Popular Music: an answer
The art of creating popular music criticism in 2012 | 50 REALLY HOT PHOTOS OF KATY PERRY TOPLESS*
DO YOU WANT WORK EXPERIENCE WITH COLLAPSE BOARD?
The 12 Mildly Disappointing Facts About Popular Music They Didn’t Want You To Read
Another day, another boring article complaining about the ‘state’ of music
10 Great All-Male Rock Bands