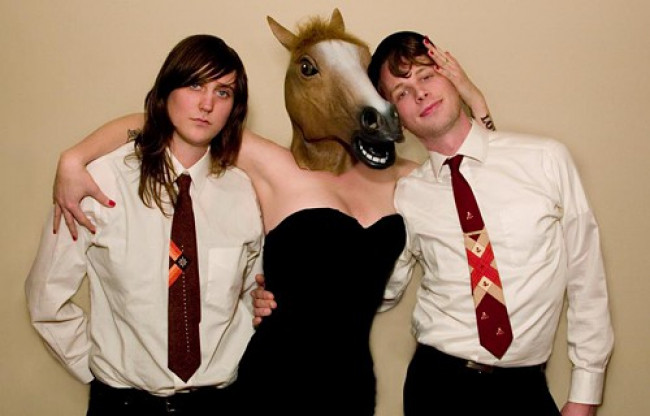 This video disturbs me. There’s something quite WRONG about it. Maybe it’s the idea of ascribing sexuality to a genre that has its roots in what Simon Reynolds doubtless would’ve called something like an “almost virginal romanticism”. A genre that The Legend! was inextricably tied up in (excuse the pun).

…back then the talk was of “shambling bands,” a John Peel coinage that celebrated the self-conscious amateurism of the music, or of “cutie,” a nod to the child-like imagery favored by the groups, from their band-names (the Pastels, Talulah Gosh, 14 Iced Bears) and record artwork to the clothing (pigtails and plimsoles for girls, buttoned-up birthday-boy shirts and little caps for the lads).

The style element was the most fascinating thing for me: “anoraksia nervosa,” I dubbed it, because most cuties seemed to be skinny and small, and the scene’s signature garment was an anorak of the sort a child might have worn in 1961. Cutie fashion was so stridently virginal, it had to be some kind of statement. Noting how love songs on the scene were romantic rather than carnal, and that the white-only sources for shambling music (Velvets, Byrds, Buzzocks, the scratchy-racket postpunkers like Swell Maps) suggested an aversion to the earthy sexuality of funk and soul, I concluded that these kids were staging a revolt against Eighties values. Rejecting hypersexual chartpop and aspirational adulthood alike, the cutie shamblers harked back to both their own lost innocence and to pop’s childhood (the Sixties), creating a new bohemia based around purity rather than debauchery.

There is nothing pure about this.

In another video, Pony Time can be seen mock-humping in a playground, wearing animal masks. I mean, they’re deliberately messing with the form. The reach and strain of Gravy Train!!! is long indeed.

Of course, if you’ve been following my Vine series The Appeal of the WRONG! in Pop Music, you’ll also know that I find something deeply attractive about the fact this video disturbs me. And equally, as Simon will admit himself these days, he could’ve been entirely wrong about the cutie movement, the idea that there was no sex involved (was that him projecting?) – and that indeed the opposite applied, that (as he now suggests) “everyone was at it like rabbits”. I am of course becoming way distracted here. The music. You wanna know about the music, right? Yeah, it’s super-fine, that’s why the fucking song is up here in the first place: grinding and distortion-heavy and brief like Henry W, it’s no coincidence the next suggested song after this on YouTube is Justin Bieber’s ‘Boyfriend’. Raw, like sushi. Garage fucking rock that fucking rocks.

The original ‘Pony Time’ was quite something, too. That’ll be the Hairspray connection, right? And when I think about it, there is something very John Waters about Pony Time… which, again, would go some way to explaining their attraction for me.