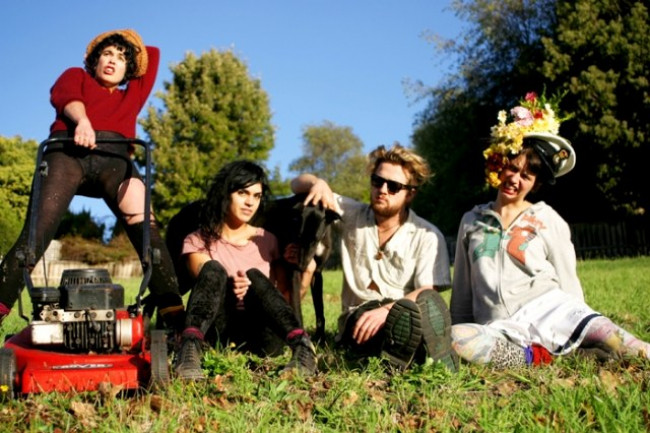 You and me sister, we share a dirty little secret.

This is how we like our music. Belligerent and hidden and with smiles to the fore. Lights on in a full-on glare. We watched The Blair Witch Project in a village hall in the middle of Tasmania once. It was pouring down with rain so hard outside, you could barely hear the film. There’s nothing worse than fireworks, at all. We drove back to our shack behind some weird-ass road-cleaning vehicle which had its lights in the back, and so we travelled at 5 mph the whole way. We get to our shack, middle of fucking nowhere, touch the door handle – and immediately every light for miles around goes out. Bangs fuck, but we would’a jumped out of our skins if someone had knocked on our window that night.

You and me sister, we share a dirty little secret.

This is how we like our music. Female and pulsating with emotion. Harmony-laden but not those harmonies you thinking of, brother. Full of false starts and even falser endings. Gaps that bridge gaps that aren’t there. Menacing and severely intimate, humorous and brilliantly alive. If you don’t tell anyone else, I won’t either. I formed a band in 1981. I say a ‘band’. I use the term loosely. It was a guitar and two voices. I wasn’t able to give vent the way I saw females giving vent, and hence despised myself. One line ran, “See that boy/Huddled in a sleeping bag/Got to keep out the cold”. It was based on real life – sorta. I didn’t have the money for a sleeping bag. Another line ran, “See that boy spend his whole life dreaming/Got to do as he is told”. It was directed at everyone I know, especially my future 51-year-old self. The one living in The Gap, listening to the ladies using gaps to bridge gaps that aren’t there.

Here’s how they put it themselves:

…which, as ever, is way more eloquent than anything I have managed here.

You can download the whole she-bang (see what I did there?) for whatever price you prefer over here. I WOULD TOTALLY FUCKING RECOMMEND YOU DO SO. Smart lyrics and laughter and noise and simulated drinking. “You mix your people like you mix your drinks!” Yes! YES!  How wonderful a place must Hobart be, that bands like Dogtower can exist there?

Quite possibly the greatest album released in 2012 that I’ve only just got round to hearing in 2013. I am going to garrotte Mr Teakle if I discover Dogtower have played Brisbane in the last three weeks.