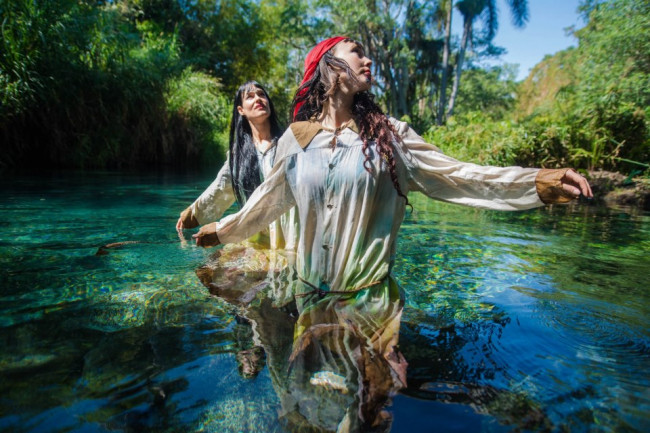 This one. This is the one I find most beguiling and strange and sad and simultaneously seductive.

And this one. Perhaps even more so, because it reprises a line I always wanted Electrelane to sing but they never did.

I would be a complete fucking liar if I didn’t admit that my reason for listening to the new CocoRosie album Tales Of A Grass Widow, and hence running this Song of the Day, wasn’t inspired entirely by Scott’s amazing review of their new album:

During their time on the planet, drifting and dreaming and dying, CocoRosie have managed to craft some of the saddest, most downright beautiful floorscrapes of music I have ever heard. One of the few artists able to fluidly move from folk to hip-hop to electronic to avant-garde and back again without missing a beat and without ever sounding not like themselves.
CocoRosie – Tales Of A GrassWidow (City Slang)

I interviewed CocoRosie once, in a dishevelled hotel room, for Plan B #20. At the time, I think I had a vague idea they might’ve been a gimmick, some smart cynical way of ensnaring suckers like me. How wrong could I be? A fair amount of jealousy (on my part) spills over into the final article… although to my younger self’s credit, I don’t try to mask it. I have a feeling that I have my old editor Frances Morgan to thank for encouraging me to write the final paragraphs, though I could be wrong. Please don’t get me wrong. I’ve listened to the new album several times over now, always attracted and ensnared by the two aforementioned songs above all, but increasingly caught in its sweetly tangled web of dissolution and despair, continually surprised by previously unheard sounds and snippets of lyrics. I’m not trying to avoid describing it by mentioning the past: just hoping to provide a little context. Also, I no longer do music criticism (and I cringe when I look at previous attempts). Music criticism is just about the last place I turn to these days when I want to discover more about music … a few notable exceptions, um, excepted.

It’s mid-afternoon. The hotel room is dishevelled, crumpled. Bottles of mineral water, fizzy drinks, glasses, litter the table. The double bed is unmade. It seems Sierra and Bianca Casady – one close-cropped, boyish but minus the moustache she pencilled on for the photo-shoot; the other perturbed but slowly thawing – have just woken up. Beautiful view out the windows, I comment, taking in the chimney pots and rooftop cafés of London all the way to Hampstead, perhaps.
Uh-oh, they nod smiling, silent and a little wary.

The new album is quite different to the previous two. Was that a conscious decision?
(Silence)
“It’s a funny idea, conscious decisions,” drawls Bianca. “We work in a very intuitive way and we’re always excited to allow ourselves to reinvent ourselves, and go against ourselves.”
“One of our main goals as recording artists is to document subconscious life,” adds Sierra, “even in our most delicate moments.”
This new record is different, though. Your debut (2004’s La Maison De Mon Rêve) was all about squeaky toys; an artfully crafted, dissipated, disingenuously dark Fisher-Price fairytale with whispered mutterings, harp and booming operatic voices forcing their way through in bursts of oddly disconnected emotion. It was folk, albeit new Americana weird-ass hippie folk – or whatever the hell name they gave it that year – along the lines of Devendra and Joanna. It charmed in its innocence, cajoled with its finery. It was bohemian, exotic, spoilt and ace. The second (2005’s unicorn-copulating, disappointing Noah’s Ark) reprised the first, made us wonder if winsome only works once.
But this one (The Adventures Of Ghosthorse And Stillborn) is way indie gone hip hop, like Barr, or those soulful emo boys over at Anticon: beat-box and ballet and bovine accordions, interpretative dancing and stained glass reveries and late
night try-outs for The South Bank Show, horses whinnying and a Mechanical Forest Of Feelings, Wee Willie Winkie running through the town wearing nothing but an icy-thin nightgown …
Ah fuck it. It ain’t that different from the first two, except in the sound – balmy, buffeted by sheen and finesse, a little bit Portishead here, a little bit M Ward there; fractured, fondant; produced in the south of France and Reykjavik. It’s not that it’s not mischievous, more that the sisters have allowed some adults into their dressing-up box world.
“The first album wasn’t a proper record,” Bianca explains. “It was a document, a sound book, a diary … We weren’t even imagining the future.”
“Story-telling is a big thing for us,” continues her sister, “even on our latest record which is the most autobiographical.”
Do you like to discomfit yourselves while you’re creating music?
“Discomfit?” laughs Sierra. “Like with whips and nails?”
“Sometimes it’s more scary,” demurs Bianca. “You don’t discriminate against those feelings. You tap into the dimensions of your subconscious.”
Is it masochistic to expose yourself to the world?
“Not at all,” Bianca replies. “It’s more of a healing process, a dismantling of all the knots. We embrace our childhood. We don’t feel a distinction between childhood and adulthood.”

First time I saw CocoRosie they were sandwiched between two metal bands: fury and finesse and fidgeting. They were already bored with the gigging process; exchanged recipes and springtime follies. They don’t remember. The second time, they were surrounded in their tangled pomp by folk like, yes, Devendra and Joanna, and how I could intrude upon such radiance? These are the chosen few, the hippie children of the Sixties dreamers, and my generation was far too prematurely disillusioned to connect with their easy, giving natures.
They don’t remember.

So, I say, flummoxed by the abstract, do you read much of your own press?
“No,” says Sierra, shaking her head. “I can’t read too good as it is. When I look at words, a lot of times they invert themselves and fold over … I don’t think I’ve read one article. I don’t read books. My eyes cross and I get really dizzy. Maybe I just need glasses, but my parents never tried.”
So where does your imagination come from, if not from books?
“Our dream-life is very vivid,” mulls Bianca. “We spent a lot of our childhood in very desolate areas. Put kids in front of televisions and video games and all kinds of colourful, moving plastic toys and they don’t need to make up stuff. We had little external stimuli. I had quite an obsession, as a kid, of making friends with small rocks.”
“We also made our own ouija board out of scraps of paper and natural objects,” adds Sierra. “We had an on-line circle of ghost boyfriends. That was very major for Bianca. So … ”
Sierra (born in Iowa) and Bianca (born in Hawaii) lived nomadic childhoods: their (now estranged) father was a shaman, and follower of the pan-tribal Native American Peyote Church; their mother was an artist and teacher. Sierra, the older child, was sent away to private school aged 13 because she would sing all day: it’s said the pair didn’t meet again until a nearly a decade later, in Paris – by which time Sierra had been through operatic training and dance school and who knows what else, and Bianca had sold street art in big cities. Although they claim not to rebel against their past, their propensity for dressing up – being photographed in the bath, fully clothed; owning their own Manhattan art gallery,
The Museum Of Nice Items; championing other esoteric artists (such as the appalling Bunny Rabbit) through Bianca’s record label Voodoo-EROS – is a clear reaction to their upbringing.
“Most moms have lipstick and dresses,” says Sierra. “My mom didn’t have that. And then our father wore maybe one pair of smelly, old, holey jeans for years. Maybe it didn’t occur to us to get into fashion back then.”
So what forms of expression were you encouraged to take?
“My dad would yell at us sometimes to go outside and do these dances to bring the rain,” Sierra laughs. “We neither believed in it nor disbelieved in it. It was a part of everyday life.”
“We grew up thinking of ourselves as outsiders,” says Bianca. “We still do, although maybe not as much.”
“The weirdest experience was when we lived in the suburbs for a while,” comments her sister. “That was so odd! There was this good Christian family living next door, with five kids – and they had five paddles on the wall, each with a child’s name. And there was one for the dog, too! And the dog’s butt was always red.”

So we talk beards and conformity, Picnic At Hanging Rock and late night atmosphere, Indian chanting and sea-changes. Living in the suburbs, like I do, it strikes me that that is where the real outsiders linger, too scared or indoctrinated to break free, not having the fortune of interpretative tutoring. In thrall to the kids hanging bored round shopping malls; in thrall to television and the continuous playground revolt against style. It’s in the suburbs that the envious lurk, looking in on the crazy, flamboyant lives of the rich and artistic – not comprehending that it’s possible to make yourself that way. The excitement comes vicariously at best, the emotions are second-hand. It’s pretty miserable being an outsider.
CocoRosie aren’t outsiders, far from it. They hang with their sainted, bohemian circles, are feted from afar. People are wrong to equate being outside with being unique. Being outside means being condemned to a cold existence away from the neon and greasepaint. No dancing about architecture.
Rock’n’roll is for the in crowd only.