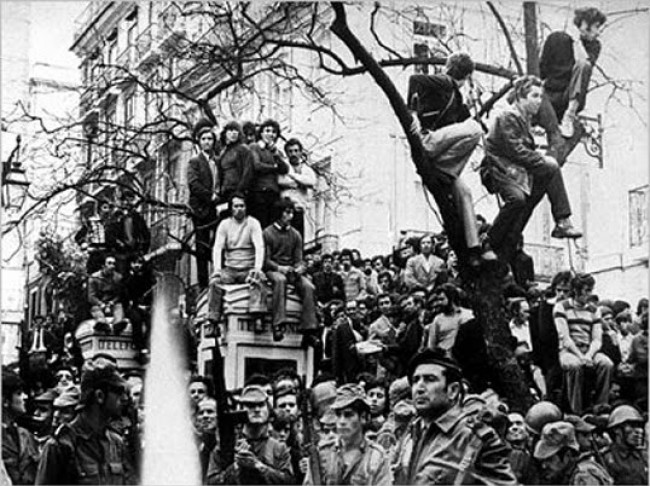 I came across this one in an assignment for KMB003, in an essay about the “Music of Intervention at the Portuguese Revolution”. (I try to leave assignments as open-ended as possible, to give students a chance to give voice to their passions.)

There’s a quality about the performance – it takes place in a crowded bar, a young man plaintively singing his heart out as disinterested patrons talk over him, laugh and clink glasses – that immediately resonates with me. I know little about recent Portuguese political history or indeed Portuguese music itself (beyond fado, a musical form that has with some justification been called “the saddest music in the world”), but some truths remain universal. His voice is stunning, the plain melody far-reaching. It hardly matters. The rich continue being rich.  Those able to consume blithely at the expense of others continue to consume blithely at the expense of others. The clip is clearly staged but maybe it isn’t. It hardly matters. Some truths remain universal.

The singer hits a slightly wrong note on the guitar and the song stops. No one notices.

I could write the hell what I wanted to here – a rhapsody to shiny leather skirts perhaps, or a sonnet to the smartly observed camaraderie of Charlie & Lola; various drinking games to forgotten drinking refrains; the way my lack of self-awareness is more than offset by my level of self-obsession – and no one would care. No one will read these words.

Here’s what my student wrote about the clip. I’m sure he won’t mind me reproducing it here.

“Canção final, Canção de sempre” (Final song, Forever song) is another poem written by Manuel Alegre, now interpreted by Luis Cília, another of the many artists that were exiled by the Estado Novo and recorded this song in Paris in 1964. Again, the song discusses the freedom of speech that was removed from the people by the regime. For a better understanding of this narrative, it is essential to point out that “Rossio” is an area in Lisbon, Portugal where the merchandise used to arrive from overseas.