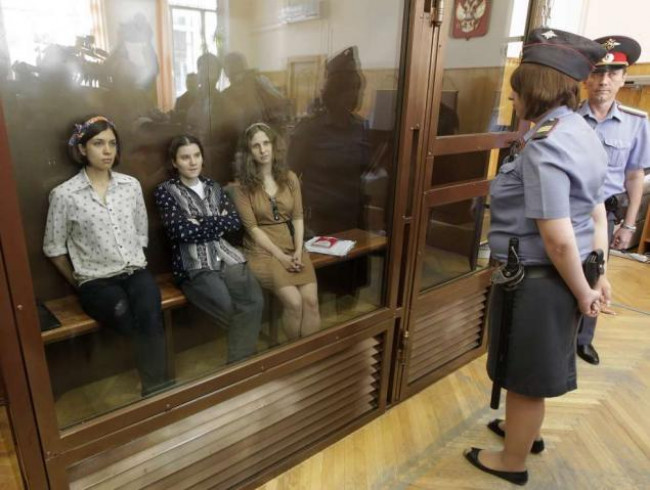 The idea behind the song is this:

There’s this slightly pathetic, socially inept indie boy, see. He idolises women. He wants to be with the women, understands instinctively that he’d have more fun if he was with the women, but can’t figure out a way to be their friend, part of their gang. So he worships them from afar, has ridiculous assumptions around what they do and they’re about, fantasises constantly (not sexually you understand, nothing like that). That’s the first part of ‘Free Pussy Riot Now!’, with its slightly pathetic rejection of adult authority (“I don’t want to be a part of your gang/I don’t want to brown nose with the man”) and slightly pathetic absurd unrealistic notions about how fun and exhilarating it would be to be part of a real life riot and hang out with women. There again most everything would be preferable to his current existence. He’s kind of clueless, really. Doesn’t have much of a grasp on the situation or the complexities of living, just can’t help being attracted by the surface pull and glamour of underdog situations. (He’s a sucker for any film involving the IRA.) He wants out, but has no real idea what OUT entails, and is drawn towards Pussy Riot because they have clearly stamped and definable standards (so different to himself). (Hence the appeal of Riot Grrrl, too.) He thinks he’s singing about the injustice of the women in Pussy Riot being locked up, but it’s still his own private fantasy world he’s detailing. There is no outside reality.

It’s no coincidence that the chorus to this part is influenced directly by the wish fantasy song in The Little Mermaid, ‘Part Of Your World’. In all likelihood, this character would run a mile or more if confronted with a Pussy Riot situation. Think of him as the archetypal Steve Albini fan. Or an Animal Collective acolyte.

Then there’s this angry, belligerent indie girl, see. She doesn’t have to be indie, just aware or angry. She is fully commiserate with the terrible injustice afforded Pussy Riot in Moscow. She wants action and she wants it NOW! She holds no truck with the insipid soul-searching whining of sad indie boy, it’s absolutely irrelevant to the actual situation. FREE PUSSY RIOT NOW! she screams, full of terrible anger. Free Pussy Riot now or there WILL BE consequences. This is the second part of the song – “What do we want?/EQUALITY/What do we want/But to set our Pussies free!” – and its confusing spoken word overdub, which in its jumble of words and invective is supposed to mirror the myriad confusing news reports surrounding the Pussy Riot trial.

The Thin Kids are Everett True, Edward Guglielmino and Scotty Regan. We are available for weddings, parties, anything.