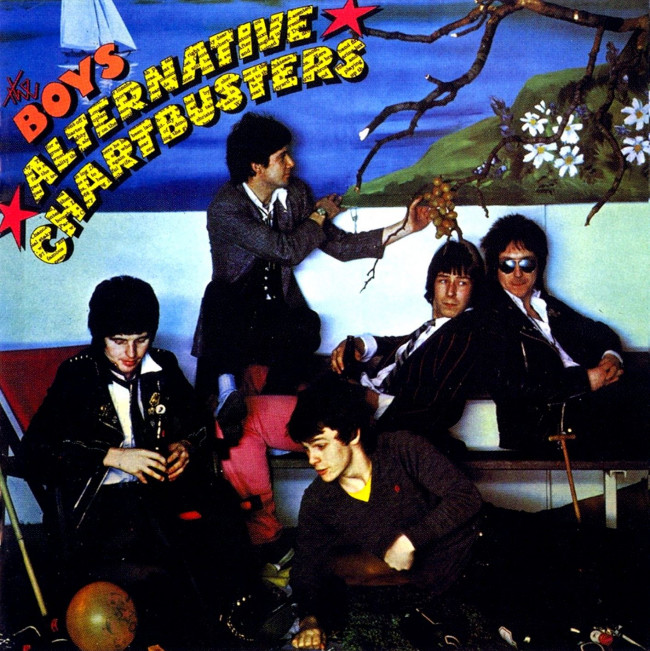 Sorry, not the all-female Brisbane band of the same name, featuring at least one of my former students. Apologies if anyone got excited.

With the girl power of the Spice Girls, the grunge stylings of the Smashing Pumpkins and the visceral energy of Joan Jett – The Boys are an all-female grunge band hailing from the shores of Brisbane who are cause for excitement on the music scene! (4zzz)

(It’s the continual Smashing Pumpkins reference that puts me off, in case anyone cares.)

Nah. This one is a way different Boys, dating back from… hey, why don’t I just phone this one in?

The following is reprinted from my Village Voice column, October 2008. Reprinted because Fire Records are reissuing the first two Boys albums, The Boys and the mightily entertaining Alternative Chartbusters.

I was embarrassed to be caught liking The Boys.

It really wasn’t on at the time (1978-9). The power-popping, vaguely punk, London outfit may have opened for Ramones, but clearly that was record company payola or something. Everything about them was wrong – their haircuts, their bomber jackets, their upbeat songs (a snatch of Nick Lowe here, a blister of Flamin’ Groovies there, a whole truck-load of the post-Beatles Merseybeat Sixties guitar boy pop there, there and there). Groups like The Boys, The Leyton Buzzards, The Fabulous Poodles and my own heartthrobs The Records (with their timeless 12-inch ‘Starry Eyes’) were so often an industry construction, designed to filter off some of the softer ‘female’ following of those nasty uncouth punk rock bands. It just wasn’t done in any sort of company – let alone that which teetered on the edge of rampant schoolboy un-cool and aspirant hipster credibility – to admit to liking any of ‘em.

I couldn’t help myself, though. I cared nothing for those who scorned Boys singles like ‘First Time’, the terrace anthem ‘Brickfield Nights’ and crushingly vibrant version of Sixties stalwart ‘You Better Move On’ – replete with whistled intro, chugging powerchords, and vaguely passionate vocals. The latter song came in for particular scorn as being a pale copy of The Rolling Stones’ original. Ha! It wasn’t the Stones’ song anyway, fuckheads (I get to say 30 years later, when they’re all gone) – and Arthur Alexander’s version shreds the rest, anyway. So unfair: I would listen to ‘You Better Move On’ (seven-inch, of course) with my head pressed down low to the Dansette – not because I was hiding, but my Dansette had no speakers and I was trying to hear from the sound of needle on groove, no amplification whatsoever.

I say I cared nothing, but by the time that Ramones show came around I was as bad as the rest of them, anyway.

I’m reminded of all this because I happened to chance across The Boys’ third album – the inappropriately titled To Hell With The Boys (1979) – and am struck by how of its time it sounds. Really, there’s little difference between The Boys’ swaggering, roughshod charm or Thin Lizzy or The Sex Pistols or anything on Stiff Records, especially The Damned: and it seems plain weird now that music should have been delineated so fiercely back then simply cos of image.

The Boys were on a losing wicket anyhow because they actually pre-dated punk but contractual hassles kept them out the running until it wa too late (one member was in legendary proto-punk group London SS, another was in the New York Dolls-influenced Hollywood Brats) – and obviously you could argue it was their fault anyway for letting their more yobbish inclinations be packaged so misguidedly for the ‘teen’ market, but whatever. (They even had a punk alter-ego called The Yobs, who released a bunch of Christmas singles a la Toy Dolls…The Boys backwards, geddit?)

People think now that New Wave means Duran Duran or some shite, but in reality it was this: laddish power-pop, with its roots firmly in the Herman’s Hermits and Small Faces of the past, and totally confused about how it should view the present.

The Boys should’ve turned up during the late Eighties, called themselves something like Redd Kross or Urge Overkill, got themselves a couple of made-up starring roles in films and the hipsters would’ve loved them.

(As it is, I note that Thee Michelle Gun Elephant had a massive hit with a Boys song – and my very favourite German punk band Die Toten Hosen are big fans…which makes an awful lot of sense, if you compare the sounds. Only goes to show, every Boy has its day.)