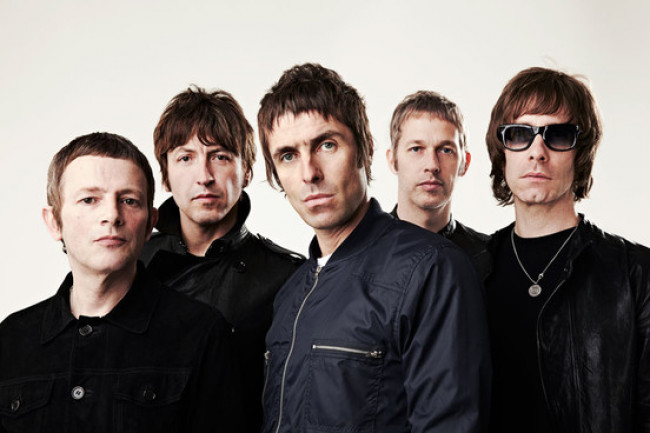 There’s a great song on the debut album from Liam Gallagher’s new band.

This one. It’s the drumming that really makes it.

P.S. Here’s my Beady Eye album review for The Vine.

It’s a fine line between not giving a shit and appearing to not give a shit, as one of my esteemed colleagues wrote recently. Ask Liam Gallagher.

When Oasis were great – and yes, they could be great: despite their relentless slide into grey, formless lad rock from their second album onwards – it was when Liam appeared not to give a shit. Disaffected, disdainful, every inch the rock star of his dreams… but inside, passionately caring about his band’s music, however third-rate and tepid it became. Why do you think he and Noel had so many arguments? Rapidly, the pretence became the reality – and he really didn’t give a crap. (See also fellow Britpop icons and inspirations, Richard Ashcroft and Ian Brown – just as derivative, and rooted in the past and traditional rock iconography and a love for the Stones and Lennon: equally as appalling once they let the kudos go to their heads. Of course, Ashcroft was like that from the start.)

There are two reasons the debut album from Liam Gallagher’s Beady Eye is getting better reviews than most people expected.

The first is that… well, there’s a sizeable school of thought these days that holds that the UK music press went to shit halfway through the ’90s. That it betrayed both its own audience and the music it was covering, when it began its unquestioning adoration of Oasis (editors needed to shift magazines). And that it hasn’t recovered since. (Read these figures and weep: UK Awards of note? Nine Q Awards, 15 NME Awards, four MTV Europe Awards, six Brit Awards. International awards? MTV Europe and Japan and…that’s it.)

These Oasis apologists didn’t disappear. (And yes, you do need to be an apologist if you want to have any credibility as a critic AND praise Oasis.) Most of the reviews that have been written of Beady Eye in the UK were by the same folk responsible for the sorry mess the UK music press is in now – they’d made their minds up in advance. They were going to pan for gold among all the shit, and crow about wherever they found it, however small measures it appeared in. You could call this approach to reviewing fair. You could call this approach to reviewing open-minded.

If you were a fucking moron.

Isn’t it exciting that Liam Gallagher doesn’t need his brother around to help him rip off ‘Instant Karma’ and ‘Power To The People’ (and ‘All You Need Is Love’, again)? Isn’t the musicianship on Different Gear, Still Speeding marvellous? Isn’t it hilarious how the song entitled ‘Beatles And Stones’ is actually is a reworking of The Who’s ‘My Generation’. Well. No, actually. It’s not even noteworthy and more than that, it’s depressing as all hell that these unimaginative, laddish reworkings of songs that have already been reworked countless times, already are being singled out for praise. No, they’re not innovative exactly – not even the most blinkered of Gallagher apologists could claim that, unless they work for Uncut or the BBC or…sigh – but they have power. Menace. Meaning.

Take, for example, the horrible bludgeoning opening orchestral rock of ‘Four Letter Word’, a song sadly bereft of melody or idea (unless you call the lyric “Nothing ever lasts forever” repeated ad nauseum an ‘idea’) except to TURN THOSE GUITARS UP REALLY LOUD. It doesn’t rock, though. Too bluesy, too reverential, the bass is too wussy. Take for example, the horrendous Gomez-style slide guitar on Andy Bell’s ‘Millionaire’. God damn, this music creaks.

The second reason is because Liam gives a shit again. Sure, Different Gear, Still Speeding is a sorry half-assed pretence of an album, sure it could have done with some judicious editing (most of the songs drag on at least two minutes too long). Sure, it’s like classic Cockney pub rockers Chas And Dave bashing out the greatest hits of The Beatles on piano. Sure, it doesn’t even make an attempt at hiding its source material most the time. Sure, it’s like if Gem (formerly of the atrocious Heavy Stereo, don’t ever forget), had been allowed to handle songwriting AND production duties in Oasis. Sure, it’s like a fifth-rate Rutles, a third-rate Status Quo, a second-rate La’s, an OK Oasis.

The lyrics are asinine. Well, of course they are. Next to a song like ‘Four Letter Word’, Britney Spears takes on Graham Greene dimensions. The melodies are derivative, when they’re present. The Steve Lillywhite production is ‘bright’. Of course they are. Of course it is. We all expected that.

It’s still quite probably the finest album Liam Gallagher has been involved in since What’s The Story (Morning Glory).

Way better is ‘The Roller’, because it manages to retain the spirit of the Lennon original. (Different title incidentally: not quite sure why Liam felt ‘Instant Karma’ needed renaming.)

‘Wind Up Dream’ is a dirge: the much-trumpeted ‘Bring The Dream’ is Chas And Dave-style pub heroics (“Jojo was a man who thought he was a loser”), the sort of thing you might be impressed by if you were really pissed and it was way past closing time. And there was promise of some coke later. This is the moment of gold among the pan of shit, according to most Oasis apologists, falling over themselves in a clamour to call it “spontaneous” – what? Because it has a fast piano bit at the end, and Lennon…I mean, Liam… going “come on” over and over and over again? Fuck. Roll over Sun Ra and tell Holger Czukay the news.

Far better to skip a track to the beautiful woozy acoustic La’s- style West Coast dreamer, ‘For Anyone’ – quite a slight beast next to its thuggish cousin bruisers, and short too (at 2.15, by some distance the album’s shortest song), and all the better for it. Really a sweet performance. ‘Kill For A Dream’ is a plodder. Well of course it is. But it still probably isn’t as ponderous or plodding as most of the final two Oasis albums. On The Edge Of Noise’ is, however: c’mon. I’m trying to be positive here but: a tune, an idea, a sound…something would be nice. The (oh god) six-and-half-minute long ‘Wigwam’ is an Eastern psychedelic freak-out jam. Well, of course it is. Didn’t Lennon himself look to the…oh wait. We can’t mention him again. (Why the fuck not? Hackneyed, clichéd music deserves hackneyed clichéd music reviewing.) Actually, ‘Wigwam’ is OK, if you haven’t actually heard The Beatles. Or Spiritualised. Or Blur (even) – yes, even Blur do this better.

The album closes with ‘The Beat Goes On’ – wow, original title – and some nice (sigh) musicianship. It’s Liam’s ‘I’d Like To Teach The World To Sing’ moment, only with dumbed-down lyrics. You hardly need it if you own the first two Oasis albums. Although, I can’t deny that to state this is missing the point.

I think critics – and fans – have a Charlie Sheen moment when it comes to Liam Gallagher. He’s shameless, he’s unapologetic, he doesn’t give a shit (or appears not to) what other people think. Obviously. No one else has the bare cheek or tunnel-vision to get away with this sort of pillaging. But don’t we all wish we could? And here’s another reason why the debut Beady Eye album works better than most figured it would. No one has given a fuck about Noel for years now: sure we loved him as a foil for Liam’s tantrums, sure his solo album will go on to sell millions and he’ll probably end up playing for the Royal Family, but it was Liam’s wonderful sneer of a voice that really captivated us. That, and the tantrums.

Sure, folk came to Oasis initially for the songs: for the songs we could even forgive the unswerving retro nature of the music and the numerous, blatant, Rutles steals. But clearly, no one had been coming to Oasis for the songs (or studio performances) for years now…and so no one is going to be disappointed by the Beady Eye album either.

Yes. Beady Eye are basically Oasis. Oasis, minus Noel. No different and no worse than what came before, and maybe even a little better. Reinvigorated, the way these things sometimes happen.

“It beats me, mama/I just want to rock and roll/Stand the test of time/Like The Beatles and Stones”

Oh you will, Liam – you will. The Beatles and Stones only ever recorded a couple of decent albums too.