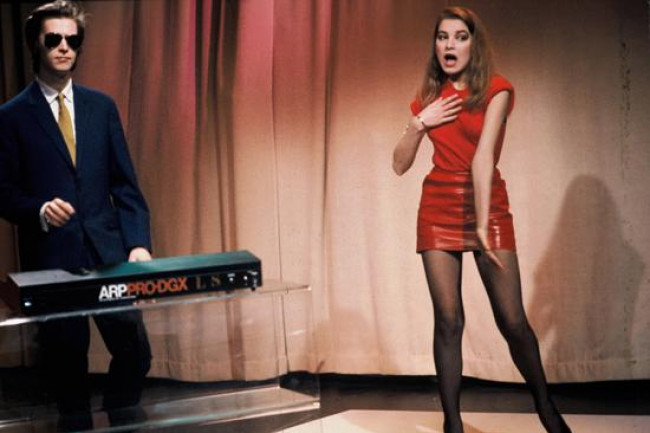 I have Mr Louis Pattison to thank (indirectly) for this one.

He tipped me off to the richly-refined, warm delights of the Gallic Ruth. I let him know how much I loved Ruth – so he sent me a compilation of French coldwave (synth-directed music from the early 80s, mainly) that Ruth feature on, entitled Des Jeunes Gens Mödernes. I was also heavily into the music of modern-day equivalent, Karaocake:  a disconsolate French girl intoning break-up scenarios over the electrical appliances let loose on the kitchen table from Gregory’s Girl. Des Jeunes Gens Mödernes means ‘modern young people’ and Bangs alive it’s great: very retro back-to-the-future analogue clinical new town. Especially this.

I’m sure it says reams about my age and the year this particular video and song were made, but I find both the song and the way the woman dances oddly alluring. And when I say alluring I really mean sexy. Clearly, this is how sex – back when I was a 19-year-old virgin – was defined for me: a tight shiny skirt and a disinterested woman dancing in a way that may or may not be construed as provocative but clearly she doesn’t care either way, and haircuts that belonged to Moonlighting or somewhere. Noah Taylor shades on the dude. And a clear Serge Gainsbourg influence (not that I would have known that at the time). I guess that’s what happens when you  spend your late teens reading superhero comic books. Sigh.

Hmm. Obviously the video has the same effect on me now, or I wouldn’t be mentioning all this.

As the comment beneath the video on YouTube states , “Every fine woman should also have a rectangular sheet of paper to dance on”.

Here’s ‘Le Telephone’ from 1982. One for Stereo-Total fans, methinks.