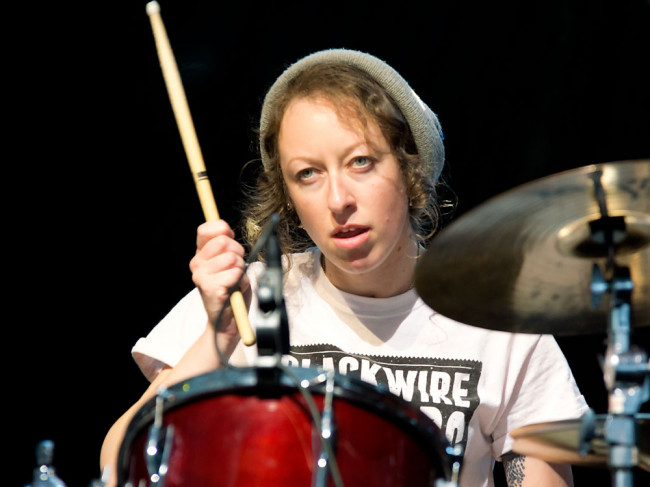 The original plan was to give today’s Song of the Day to Camp Cope’s ‘The Opener’.

“What?” you ponder, with a furrowed brow.

“Didn’t you already give Camp Cope’s ‘The Opener’ Song Of The Day status a few weeks back? Have you lost it Collapse Board? Are you drunk? Too much aluminium in your saucepans?”

Sure, we belatedly awarded Camp Cope’s ‘The Opener’ Song of The Day a few weeks back but there are any number of reasons to give it a second time:

The more I thought about Falls Festival’s response, and in particular the last paragraph, the more annoyed I became.

The festival organisers could have said nothing, and, ultimately in hindsight, it would have been better for them if they had maintained their silence about the matter.  The more I re-read it, the more it felt that their response went beyond just being patronising and was purposely written to belittle and humiliate the band.  If this was the case then it also patronises anyone who is working hard within the music industry to achieve positive outcomes with regard to diversity and inclusivity and also anyone who believes this is an important thing to support.

What happened next (but ignored by the Australian music press, probably for fears of future accreditation issues) was posted up by Camp Cope’s drummer Sarah Thompson on Twitter.

It begs the question, just how petty can you get? The embarrassing child-like behavior is something you might expect of surly teenagers but not from grown adults representing one of Australia’s largest and most powerful music businesses. Is it?  Sadly Sarah is probably right when she guesses that Camp Cope won’t be invited back next year.  It’s probably also highly likely that they won’t be invited to play at this year’s Splendour In the Grass festival.  Or, if it’s still a thing and makes it into a second year, next year’s Download festival. Or that new Sydney City Limits! festival.

Instead of being  small-minded and spiteful, the Falls organisers could have tried to rise above it, just say “sorry things got heated, we love your band, that’s why we booked you, thanks for playing, we understand, this is important to us too, we will work harder in the future.”  But no, toys out of the pram and bridges burnt.

Following up from the Australian summer festival scene, the last couple of weeks, there’s  the line-ups for a couple of UK summer festivals, Wireless and Green Man, have been announced.  As Lily Allen pointed out when Wireless’s three day line-up was modified to only show the female performers, “The struggle is real”.

While Green Man may not be quite as bad, you have to go a fair way down the bill to get to the non-men acts.  It asks the question that if those bands are your headline acts, are you really saying you couldn’t book any acts that included females and did you actually try to find anything more diverse.

Doing the rounds on Twitter when the Wireless line-up was announced, music writer Abigail Firth suggested some alternate line-ups that show, with a little thought by festival orgasnisers, there are endless possibilities when it comes to booking their acts, any number of options to replace the same old, same old male bands that feature year in, year out.

still thinking about that wireless lineup nonsense. mad that we have this conversation every. year. here's a not impossible lineup with all women (I did r+l too for when they inevitably have 2 women on stage all weekend) pic.twitter.com/4ISaoLeyC5

That Reading Festival line-up deserves to be posted up much larger and admired.

Having been to plenty of Reading Festivals down the years, if you only got a quarter of those acts to play your festival, it would still be one of the best Reading line-ups ever, and easily the best festival bill you’re likely to see in 2018. Imagine a festival that put a bill like that together! Getting all of the big names might be a financial stretch too far for any festival, but other than scheduling conflicts, there’s little reason why a festival couldn’t book a bunch of those acts.

One Response to Song of the Day 169: Camp Cope